Appearing on ABC’s This Week, National Public Radio’s Cokie Roberts admitted that “for years” the female press corps has covered up sexual misconduct on Capitol Hill.

While speaking about John Conyers and Al Franken, two Democrats facing numerous sexual misconduct allegations, Roberts let this bomb matter-of-factly drop on the left-wing Sunday show, “I mean, we all talked about for years: ‘Don’t get in the elevator with him,’ you know, and the whole every-female in the press corps knew that, right, don’t get in elevator with him.”

Which “him” is Roberts referring to? Conyers? Franken? Are there others?

But back up just a moment– According to Roberts, “every” woman in the press corps knew that there was sexual misconduct going on in congress, knew that it was so brazen and so permissive that not even a female reporter was safe on an elevator, and NO ONE REPORTED IT?

No one bothered to inform the public?

How do things get so brazen that a Conyers or a Franken or a whomever feels perfectly  safe groping a journalist on an elevator? I will tell you how — when said groper knows there will be no accountability for his behavior.

I am 51-years-old, and I have seen a bit of the world;  I have seen attack ships on fire off the shoulder of Orion and I have watched C-beams glitter in the dark near the Tannhäuser Gate. But something I have never seen is a man grope a woman without her consent.

Yet, according to Roberts, our wonderful, glorious, utterly useless press corps knew for years this was going on in congress and covered it up, said nothing, let it slide, ENABLED IT, and through their silence, encouraged it.

Other than the fact that our elites suck, this is my theory…

As we all know, Cokie Roberts is a lefty, as is 99% of the female press corps. Does anyone doubt, then, that the primary elevator gropers are/were Democrats, are/wereTed Kennedy/Franken/Conyers-types who voted the way in which the females press corps wanted them to vote, so a little snatch of media-bootie in an elevator was considered a small price to pay for abortion-on-demand?

And this is why, in my opinion, congress has gotten away  with covering up these taxpayer-funded sexual harassment settlements for two decades. The media has known about this. Of course they have. Nothing was reported, though, because the names on that list are primarily Democrat “icons” like Conyers.

Even now, even when we know about this secret fund, the media’s interest in the story, in exposing the wrongdoers, is practically non-existent. This should be the biggest story in the world, the narrative dominating everything else. It is all there — a $17 million slush fund, cover ups, corruption, sex — but the media does not really care. Just last week, the left-wing Politico was downplaying this outrage, hoping to wrist-flick it all away. And I think we all know why…

Democrats sure got it good.

So good, in fact, Cokie is still not being asked to names names.

You must understand that corruption is in full display. Listen to todays broadcast:

3 This know also, that in the last days perilous times shall come.

2 For men shall be lovers of their own selves, covetous, boasters, proud, blasphemers, disobedient to parents, unthankful, unholy,

3 Without natural affection, trucebreakers, false accusers, incontinent, fierce, despisers of those that are good,

5 Having a form of godliness, but denying the power thereof: from such turn away.

FEBRUARY 9–Angered that he had yet to consummate his six-month-old marriage, a 76-year-old Florida man allegedly shot his new bride in the buttocks, according to police who arrested the septuagenarian for felony domestic violence. 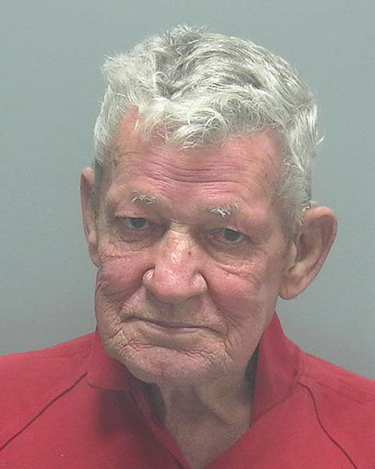 Donald Royce, pictured at right, was arrested Saturday night after firing a pair of shots at his 62-year-old spouse in the bedroom of the couple’s Lehigh Acres residence. He is being held in the Lee County jail in lieu of $100,000 bail.

Royce “explained that they have been married since August and together they have not consummated their marriage,” according to a probable cause statement prepared by a police detective. “Donald became violently angry tonight due to his requesting sex with his wife and her refusing.”

During questioning by cops, Royce said that he had been arguing with his wife about their sleeping arrangements when he decided to fire into the bed to scare her. But Royce said he missed the mattress, instead striking the victim in the hip and buttocks.

“Donald then stated he only wanted to shoot the mattress but was upset when he realized he had shot his wife,” an investigator noted. When sheriff’s deputies first arrived at his home, Royce declared, “I shot her and the gun is in my room.”

Royce’s wife was transported to Lee Memorial Hospital, where she was treated and later released. A judge has ordered Royce to have no contact with his spouse.

Royce and his wife–who had been together for six years–were wed in August 2016 at the county clerk’s office in Fort Myers.

CLIFTON, NJ – Two men were arrested  and charged with engaging in lewd behavior on a display bed at Bed Bath & Beyond during regular business hours.

Police officers responded to the Route 3 Riverfront shopping center at 5 p.m. Monday on a report from a witness that two men were engaged in a sex act, records show.

Police arrested two 28-year-old men, one from Nutley and the other from North Carolina. Both were charged with lewdness, criminal mischief and possession of marijuana, according to police records. The Nutley suspect was also charged with having an outstanding warrant for his arrest.

The incident was reported by an employee who witnessed the act, reports show.

One or both of the men apprehended by police were found to be infected with scabies, a contagious skin infestation caused by a microscopic parasite that burrows beneath skin. The arresting officers were exposed to the mites, according to police reports.

Because the two men were found to be suffering from a health condition, their identities are protected by the Health Insurance Portability and Accountability Act, known as HIPAA, officials said. However, police said they were not Bed Bath & Beyond employees.

The officers were treated at St. Joseph’s Regional Medical Center and released, though they were on leave for a few days to avoid contaminating the Clifton Police Department’s offices, according to the record of the incident, which also said the booking station had to be fumigated by exterminators to prevent any spread of scabies.

Detective Lt. Robert Bracken said it’s not yet known if the suspects were intoxicated or under the influence of a controlled dangerous substance. He said there was no clear motive or reason behind the crime.

Bracken credited the store’s employees, who were “proactive in remedying the situation.”

A manager at the store declined to comment when reached on Thursday and referred inquiries to its headquarters.

“Out of an abundance of caution, the incident-related merchandise and display was immediately pulled from the floor and discarded. We will continue to take steps to assure that our store and merchandise continues to be safe for our customers and associates. If any customer feels uncomfortable in our store for any reason, we will of course attempt to address such a situation in an appropriate manner,” Joyce wrote.