Dyson hammered West for various aspects of the White House appearance and accused the West of being a vehicle for white supremacy.

“This is white supremacy by ventriloquism,” Dyson said. “A black mouth is moving, but white racist ideals are flowing from Kanye’s mouth.”

A new report names Baltimore, Md., as the most dangerous city in America after the city had the highest per capita murder rate in the country for 2017.

USA Today analyzed 2017 law enforcement crime data from the 50 biggest cities in the nation and found that Baltimore had a higher per capita murder rate than cities like New Orleans and Detroit.

Baltimore struggled to fight the gun violence plaguing the city in 2017, with activists hosting “ceasefire weekends” in an attempt to urge people to stop murdering each other.

Things seems to have taken a turn for the better in the city since the new year started. The mayor fired the former police commissioner and enacted a new one to get better results on stopping the violence and killings that have gone down since the year began.

Not all residents agree with the USA Today analysis of their city, saying they haven’t felt any danger while living in the city.

“It’s a shame when people who don’t come in the city and don’t experience the city, don’t have relationships here want to make comments about it,” Rachel Cybor told CBS Baltimore.

Here’s The Most Dangerous City In America. It’s Not Detroit

The school board approved the resolution on Thursday making it one of the first school districts in the state of Maryland to do so. On Monday, the first day, people were encouraged to wear all black.

FOX 5’s Anjali Hemphill visited Parkdale High School where she found lots of participation but also some opposition. Hemphill says some students watched a video called “The Talk,” when she visited on Monday. “The Talk” is an example of one of several films and books that are recommended by the teacher’s union for “Black Lives Matter Week of Action.”

Organizers say “Black Lives Matter Week of Action” is about encouraging conversation and reflection about social justice in schools. “We start this conversation in schools because for many people and for many students, this is community. This is where you learn and where you talk to your peers. Maybe your professors and advisor that are going to advise you later on in life. So school is the most appropriate place to have these conversations,” said Joshua Omolola, a Parkdale High School student.

Participation is not mandatory, only encouraged. Hemphill said she spoke to both students and teachers who are excited to incorporate this subject into a week that is already being spent celebrating Black History Month. Hemphill said she also spoke to a teacher who didn’t want to go on camera in fear of retaliation. The teacher, who is an African American woman, says she does not support “Black Lives Matter Week of Action” and is very concerned about this new resolution passed by the board.

“I haven’t had a kid to walk out of my classroom. Only kid I’ve had – we’ve had discussions, and we’ve had heated discussions in the class. For some reason the students that are in this school are really – I guess because it’s so diverse – they are really good with respecting each other’s opinions,” said Neville Adams, and English and student government teacher at Parkdale.

Hemphill said she asked the board if they would allow other activist groups to have a “Week of Action” in their schools. The board said they would consider other ideas that encourage tolerance, equity and social justice.

I find it so damn funny that slave negro’s like Lebron James is pretending to be outraged over the h & M Hoodie that says “coolest monkey in the jungle”. Now the mother of the young man who’s name is Liam Mango and his mother who’s name is Terry Mango said this is people “crying wolf”. I did a video and you can check that out at https://commonsensenation.net/videos/ .

(1) “Every eight hours, a woman is killed by an intimate partner, according to the SA Medical Research Council.

One in five (21%) of women in a relationship have experienced physical violence by a partner, Stats SA said in its South Africa Demographic and Health Survey 2016 released in May.

Last week NPA Western Cape spokesperson said: “From January up to today, there have been 19 children that have been killed in the Western Cape. Twelve of those cases will go to the high court.”

Here is a list of just 20 of these countrywide murders. Five of them were children. Two of the women were pregnant. Many more cases will go unreported:”

All the damn crime that happens every  day in most every inner city and Slaves like  Lebron James and the jackasses from the Hip Hop Community does not do one damn thing to speak against it. You are safer in Afghanistan than in Chicago or most inner cities.  Why don’t Black Lives Matter,  Colin  Kaepernick, The NFL idiots, The Media, and All Of Media Elites help stop black on black crime. This is nothing but a bunch of fake outrage from race baiting morons who want to seem “aware” and relevant. This is just as insane as the whole so-called President Trump calling some countries like Haiti, and El Salvador shitholes. I don’t know if Trump called these countries shitholes are not but the truth of the matter is they are shitholes.

If I call dog shit shit does not make me hate dogs? No it does not and if the mother and father of the young man is not racist. Why in the hell are all of these Social Justice Warrior pretending to be outraged?

In a tweet sent from his account, Khamenei wrote, “The U.S. gov. commits oppression inside the U.S., too. U.S. police murder black women, men, & children for no justifiable reason, and the murderers are acquitted in U.S. courts. This is their judicial system! And they slam other countries’ and our country’s judicial system. #BLM“:

The U.S. gov. commits oppression inside the U.S., too. U.S. police murder black women, men, & children for no justifiable reason, and the murderers are acquitted in U.S. courts. This is their judicial system! And they slam other countries’ and our country’s judicial system. #BLM

This is not Khamenei’s first time commenting on the incident that originated in Ferguson, Missouri, in 2014 when Michael Brown was shot and killed. The police officer responsible did not receive criminal charges.

In 2014, Khamenei tweeted, “#Jesus endured sufferings to oppose tyrants who had put humans in hell in this world& the hereafter while he backed the oppressed. #Ferguson“:

#Jesus endured sufferings to oppose tyrants who had put humans in hell in this world& the hereafter while he backed the oppressed. #Ferguson

Earlier that same year, he tweeted, “Today like previous years, African-Americans are still under pressure, oppressed and subjected to discrimination. #Ferguson“:

#Jesus endured sufferings to oppose tyrants who had put humans in hell in this world& the hereafter while he backed the oppressed. #Ferguson

In a Christmas Eve tweet, he compared the Ferguson shooting to the Palestinian people in Gaza, writing, “If #Jesus were among us today he wouldn’t spare a second to fight the arrogants&support the oppressed.#Ferguson #Gaza“: 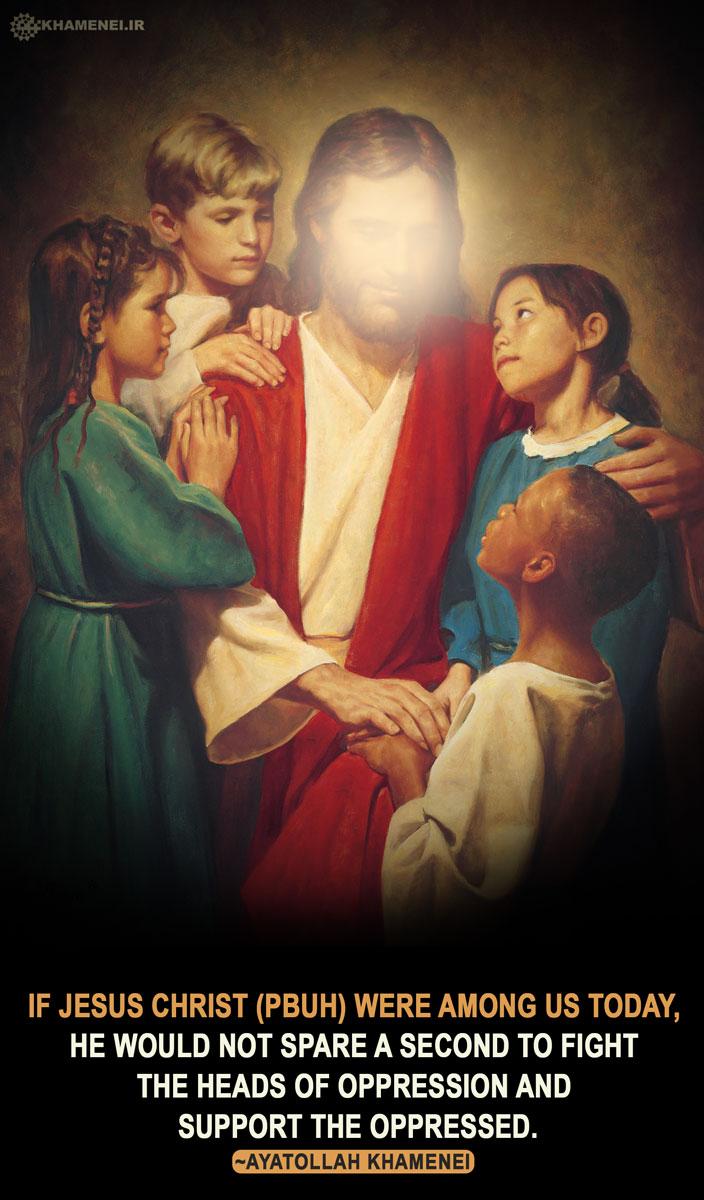 If #Jesus were among us today he wouldn’t spare a second to fight the arrogants&support the oppressed.#Ferguson #Gaza

It is not uncommon for Islamists to align with left-wing groups and ideologies.

Iran has a track record of not providing its political prisoners with fair trials or access to proper defense attorneys. It is also known for its egregious human rights abuses and discriminating against minorities, including members of the LGBT community, Christians, Baha’is, and Jews.

Iran is the world’s largest state-sponsor of terrorism, funding Hamas in Gaza, Hezbollah in Lebanon, and the Houthi rebels in Syria, to name a few.

Breitbart News documented a list of the chaos and terror the Iranian regime and its Islamic Revolutionary Guard Corps (IRGC) have reaped in the Middle East region since it came to power in 1979 after Iran’s late Shah Mohammad Reza Pahlavi was overthrown and replaced with radical Islamic hardliner Ayatollah Ruhollah Khomeini.

Black American residents of Baltimore, Maryland, are now blaming a lower police presence for the city’s soaring murder rate despite three years of Black Lives Matter (BLM) activists insisting that police be pulled from their neighborhoods.

Baltimore has now experienced higher murder rates for three years in a row after riots and BLM-sponsored protests began rocking the city after the death of Freddie Gray, a suspect who died in police custody in the spring of 2015, National Public Radio (NPR) reported.

Since the riots, police morale has collapsed, and city officials began planning a lighter police footprint in response to complaints of residents and protest leaders.

But now, black leaders are blaming cops for the spiraling murder rate, saying that the police pullback has put them in danger.

The Rev. Kinji Scott, a Baltimore activist, is blaming city hall for leaving the neighborhoods unprotected.

Scott and others are now pressuring the city to bring police back in as a deterrent to the soaring crime rate.

Despite the loud proclamations from BLM activists that the police are the problem, Scott and his fellow activists are now claiming that they never wanted police to go away.

In an interview with NPR, Scott claims only the progressive activists wanted cops to be eliminated:

No. That represented our progressives, our activists, our liberal journalists, our politicians, but it did not represent the overall community. Because we know for a fact that around the time Freddie Gray was killed, we start to see homicides increase. We had five homicides in that neighborhood while we were protesting.

What I wanted to see happen was that people would be able to trust the relationship with our police department so that they would feel more comfortable. We’d have conversations with the police about crime in their neighborhood because they would feel safer. So we wanted the police there. We wanted them engaged in the community. We didn’t want them beating the hell out of us, we didn’t want that.

Scott also blamed the city for not fostering a community atmosphere between police and the neighborhoods.

The primary thrust nationwide is what President Obama wanted to do: focus on building relationships with police departments and major cities where there had been a history of conflict. That hasn’t happened. We don’t see that. I don’t know a city—Baltimore for certain—we’ve not seen any changes in those relationships. What we have seen is that the police has distanced themselves, and the community has distanced themselves even further. So the divide has really intensified, it hasn’t decreased.

And of course we want to delineate the whole culture of bad policing that exists—nobody denies that—but as a result of this, we don’t see the level of policing we need in our community to keep the crime down in our cities that we are seeing bleed to death.

This is despite Baltimore protesters carrying signs that read things such as “disarm the police,” or wearing T-shirts promising to kill cops.

The reverend’s claims also seem to fly in the face of a list of 19 demands issued by protesters in 2015, one of which demanded that police be barred from entering certain buildings or parts of neighborhoods they had designated as “safe” from police. Clearly, the protesters wanted police removed from Baltimore’s neighborhoods. But now that they’ve gotten their wish, community leaders have suddenly realized what a bad idea such a pullback is.