SACRAMENTO (CBS13) – A Sacramento resident is crying foul after a woman delivering packages for Amazon allegedly did her business in the street in front of the woman’s home. And the act was caught on video.

Around 3 p.m. Thursday, the woman, who works for a third-party delivery company, drove up to Nemy Bautista’s home in a U-Haul van, got out, delivered the Amazon package and went back to her van. But before she drove away, the woman opened the passenger side door, squatted down, and defecated.

When Bautista arrived home, she noticed the feces and initially thought it was a dog. She checked her surveillance video footage and found it was actually from a human.

Disgusted, Bautista went on Facebook and left this message:

“Amazon.com Why is your driver squatting in-front of my house? Let me give you a hint … he/she is not tying their shoes. I have it on video!”

Disgusted, Bautista went on Facebook and left this message:

“Amazon.com Why is your driver squatting in-front of my house? Let me give you a hint … he/she is not tying their shoes. I have it on video!”

Amazon is batting down claims that it deleted hundreds of one-star reviews of Hillary Clinton’s new book about the 2016 campaign, “What Happened,” and says that it doesn’t delete reviews because they are negative.

“We never suppress reviews based on star rating or sentiment,” Amazon told LifeZette in an emailed statement. “We have triggers in place to detect when numerous reviews post in a short amount of time that are unrelated to the product. When these triggers are activated, we suppress all non-Amazon Verified Purchase (AVP) reviews on the product.”

Clinton’s book was officially released on Tuesday, and by Wednesday morning, there were more than 1,600 reviews posted, with an almost even split between positive and negative reviews. About 50 percent of reviewers had given it five stars and 49 percent only one star.

The average rating, according to Quartz, was 3.2.

By Wednesday evening, however, there were only 460 reviews left on the site. All were marked “Verified Purchase” — indicating the reviewer had purchased the book on Amazon. Most, if not all, were five-star reviews.

By Thursday afternoon, there were 626 reviews — 607 positive and just 22 negative. The average rating was 4.9 out of a possible 5. All were marked “Verified Purchase.”

However, a collection of one-star reviews slammed Amazon for appearing to delete other bad ratings, and those knocking Clinton and the book took up almost the entire first page of reviews, evidently because they got the most likes.

Some Clinton critics, it appears, were willing to shell out the money to buy the book so that they could have their say.

“Amazon Customer Reviews must be reviews related to the product and are designed to help customers make purchase decisions,” the company said in a statement emailed to LifeZette on Thursday, “In the case of a memoir, the subject of the book is the author and their views. It’s not our role to decide what a customer would view as helpful or unhelpful in making their decision. We do however have mechanisms in place to ensure that the voices of many do not drown out the voices of a few and we remove customer reviews that violate our Community Guidelines.” 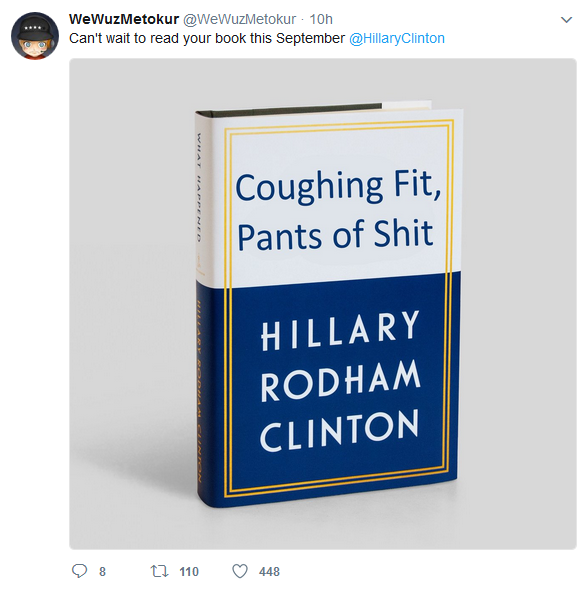 The “many” as of this writing would be the 93 percent of reviewers who’ve written five-star reviews, and the “few” would be the one-star reviewers. Even though they dominate the first page of reviews, they are still drowned out in terms of having little impact on the overall rating for the book, which remained at 4.8 out of 5 as of Friday morning.

“What Happened” is published by Simon & Schuster, which also published Clinton’s three other titles, including the 2004 book “Living History,” for which the publisher paid Clinton an $8 million advance — thought to be the largest advance ever awarded to any author at the time. In 2014, it was rumored that she got a $14 million advance for her pre-campaign book “Hard Choices,” about her years in the State Department.

The price for “What Happened” on Amazon was immediately slashed upon release from $30 to $17.99, while the Kindle version was selling for $14.