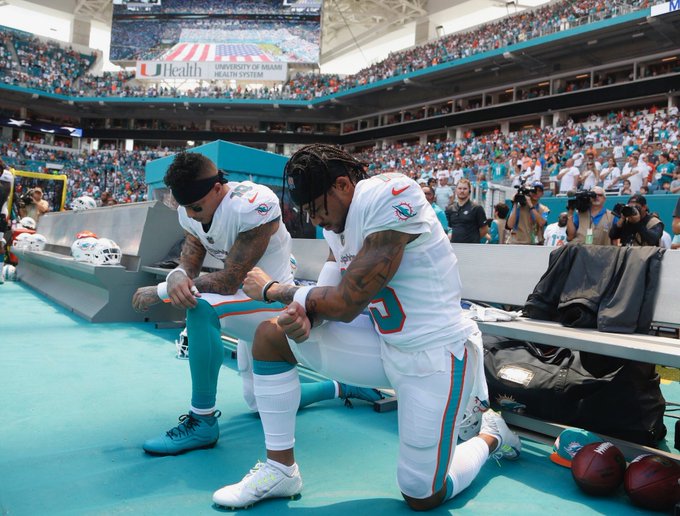 The people have spoken.

As I’ve written before, boycotts just seem to work a lot better when spearheaded by conservatives as opposed to liberals.

Extremely recent history has shown that to be true yet again.

While the far-left flounders to dissuade people from eating at In-N-Out Burger, for the sole reason that the California-based burger chain dared to donate to Republicans, it took conservatives all of a day to put a noticeable dent in apparel titan Nike.

Regardless of how you felt about the price, quality or branding of Nike, for years it had always been a generally inoffensive apparel company. Yes, its marketing tends to skew toward “trying to be edgy,” but it was hardly boycott-worthy.

That is, until the company decided to thrust the polarizing Colin Kaepernick front and center for its 30th anniversary ad campaign.

Colin Kaepernick
✔
@Kaepernick7
Believe in something, even if it means sacrificing everything. #JustDoIt

3:20 PM – Sep 3, 2018
818K
375K people are talking about this
Twitter Ads info and privacy
No matter how you feel about Colin Kaepernick, his anthem protests, his anti-police and pro-dictator rhetoric and clothing choice (he infamously wore socks depicting cops as pigs and, on a separate occasion, a T-shirt shirt emblazoned with the image of former Cuban dictator Fidel Castro) you have to admit that he is a divisive figure.

After all, while Kaepernick obviously has his supporters, he has just as many detractors who find his message to be anti-American and extremely disrespectful to the men and women who serve this country.

Tea Party Patriots
✔
@TPPatriots
After disrespecting our nation and anthem, first-kneeling former QB Colin Kaepernick is now the face of #Nike even though he is no longer part of #NFL. http://bit.ly/2wJsJQP @mvespa1 via @townhall #TeaParty

What Are You Doing?! Nike Makes Colin Kaepernick The New Face Of Their Just Do It Campaign
townhall.com
13
See Tea Party Patriots’s other Tweets
Twitter Ads info and privacy
That displeasure with Kaepernick kicked off an immediate #BoycottNike movement, primarily led by conservatives, when Nike revealed its big collaboration with the NFL’s most famous malcontent.

10:06 AM – Sep 4, 2018
374
118 people are talking about this
Twitter Ads info and privacy
From all indications, it wasn’t just Twitter user “DavetheWave” who ditched Nike stock. Countless others must have followed suit because Nike’s stock took an overnight tumble. In other words, just the likelihood of an effective conservative boycott of the company had investors more than a little skittish.

Does this show companies should fear conservative boycotts?
Yes No

Enter your email
Completing this poll entitles you to Conservative Tribune news updates free of charge. You may opt out at anytime. You also agree to our Privacy Policy and Terms of Use.
RELATED: James Woods Calls on Shareholders with Incredible Plan To Shutdown Nike

According to Reuters, Nike stocks fell by 2.7 percent on Tuesday, less than 24 hours after the company unveiled the Kaepernick ad. That figure may not seem large, in and of itself, but for a multi-billion dollar company, a 2.7 percent drop can account for hundreds of millions of dollars.

The effectiveness of a boycott is certainly subjective. After all, despite the 2.7 percent dip, Nike’s stock has still grown a healthy 31 percent in 2018, according to Bloomberg.

But the fact that conservative voices can deal a blow, no matter the size, to a massive company like Nike shows the power of a conservative-led boycott.

CNN is reporting that Nike investors are not happy with the Kaepernick ad. Whether the reasoning is moral, fiscal or both, they have every right to be.

CNN anchor Don Lemon believes standing for the national anthem at NFL games and the pageantry surrounding it are examples of “fake patriotism.”

While discussing President Donald Trump’s decision to cancel the White House celebration for the Philadelphia Eagles on Tuesday evening, Lemon also accused Trump of not understanding what “real patriotism” is.

“This isn’t about some fake patriotism, about standing or some pageantry. Real patriotism is understanding what the Constitution means for all Americans and abiding by the Constitution, not doing some false presentation that you pretend to be a patriot while other people are around you going to the concession stands, getting beer, or fights in the stands or talking to each other with their baseball caps on,” Lemon said Tuesday evening on CNN. “That is not real patriotism. Real patriotism is understanding that all of us are created equal and we have the choice to stand, kneel or sit, or even attend a football game if we choose to.”

Lemon said Trump and White House Press Secretary Sarah Huckabee Sanders “have it all wrong” about patriotism, and he highlighted the White House press secretary’s remarks about America being a great nation because “we stand during the national anthem.”

“What makes this country great is that we have the choice to stand or not to stand during the national anthem. This is not a dictatorship,” Lemon continued. “We don’t have to do anything in this country.”

During a recent appearance on NBC’s Meet the Press, MSNBC’s Andrea Mitchell expressed a similar claim, saying the NFL’s “hypocrisy is so profound” on the issue.

“Take a look at any NFL stadium, and people are getting hot dogs, people are getting beers. They’re not standing and saluting the anthem, for a large part. They’re not. They’re distracted. They’re fans at an event,” Mitchell said last month. “And the fact that the players do not have this freedom of speech and that no one is even thinking about Colin Kaepernick … who’s been basically blackballed and can’t be hired — it’s just outrageous.”

Lemon added that Trump knows that asking athletes to stand for the national anthem “animates his base,” and “he is going to continue on with it.”

“He cannot be a unifier. He cannot be the unifier in chief. I don’t know what it is about him that he can’t do it,” Lemon said. “It seems that this is an issue where he could actually bring the country together, bring the team and talk to team owners and players, and try to get them to come to some sort of consensus about this.”