The State Department announced a new $600,000 taxpayer-funded study that suggests “ideals of masculinity” in Kenya are contributing to terrorism.

The department’s Bureau of Counterterrorism is seeking a nonprofit group to “explore gender identities of boys and men in Kenya.” The grant proposal states that men being “tough, heterosexual, aggressive, unemotional, and achieving” can make them vulnerable to joining Islamic extremist groups.

To remedy this, the State Department will spend up to $592,500 on the “Masculinity and Violent Extremism” study, which will be awarded to an American nonprofit or nongovernmental organization later this year.

The study will “determine existing knowledge and gaps on male gender and violent extremism as well as explore gender identities of boys and men in Kenya.”

“In Kenya, boys and men are disproportionately recruited by al-Shabaab and more likely to be both operators and victims of terrorist acts,” the State Department said. “Kenyan society, while diverse in its ethnic and cultural composition, is uniformly patriarchal and highly prescriptive of gender expressions and identities.”

“Kenyan males are expected to head the household as well as provide for, protect, and maintain the family,” the department continued. “Socially, males are expected to be tough, heterosexual, aggressive, unemotional, and achieving. The practical and social pressures to fulfill these expectations can be immense and create vulnerabilities that are exploited by violent extremist groups who appeal to these characteristics and offer the opportunity to fulfil [sic] these roles.”

The State Department added that the research would involve fathers and community leaders in Kenya in the hopes to “shape existing cultural narratives on masculinity, gender, and violent extremism.”

“Funds will support male-to-male dialogue and training on issues of gender and encourage stronger social and familial support structures,” the department said.

German domestic intelligence has warned of a growing number of Islamic extremist women who are taking over the Salafist scene, as their men head to prison, and are radicalising the next generation of young jihadis.
The Agency for the Protection of the Constitution in North Rhine-Westphalia claims that the Islamic extremist scene is becoming increasingly more influenced by women. Burkhard Freier, head of the regional branch of the agency, said that the women have come into prominence and they have at least 40 female radicals under observation, Die Welt reports.

“The men have realised that women can network much better and therefore are much more able to tie the scene together and keep it alive,” Freier said.

According to the agency head, the real danger is that the women are creating Salafist communities in which mothers preach extremism and raise their children as young jihadis in a parallel society.

“This makes Salafism a family affair, it begins to create something that is much harder to liquidate, namely a Salafist society,” Freier said and added that “every jihadist terrorist we’ve seen in Europe in recent years came from the Salafist scene.” 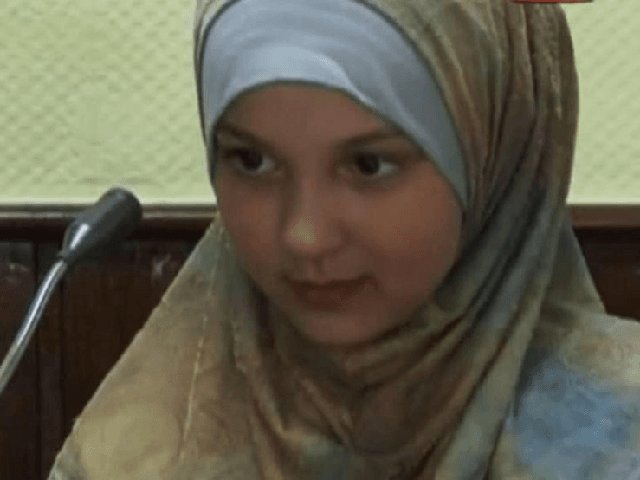 Others, like German Muslim teen Linda Wenzel, travelled to the Middle East to join Islamic State. The 16-year-old currently faces the death penalty after she was captured by forces liberating territory from the terror group’s control.

She is said to have served as a female enforcer of the strict Sharia law endorsed by the extremist group.

Others, like German Muslim teen Linda Wenzel, travelled to the Middle East to join Islamic State. The 16-year-old currently faces the death penalty after she was captured by forces liberating territory from the terror group’s control.

She is said to have served as a female enforcer of the strict Sharia law endorsed by the extremist group.

Noreen Lagahri, she is a Muslim and two weeks ago she was arrested for planning to bomb a Church in Pakistan. She confessed that she planned to do suicide attack on the Church and she was working for Al Qaeda and Taliban. But now she has been released from prison by the Pakistani government because they say that her life will be ruined if she stays in jail so she will now continue her studies.

Asia Bibi (Asiya Noreen Bibi), a Christian sister who was arrested on false charges of blasphemy. She has been in jail for 9 years and is facing death penalty for a crime she didn’t even commit just because she is a Christian. The western world still do not understand that Christians in Pakistan are facing worst kind of persecution and genocide.

In Pakistan, Is justice for Muslims Only ?

On Monday 27-year-old Akayed Ullah, a Bangladesh national, injured three individuals when he allegedly tried to detonate a suicide bomb in New York City in a planned terrorist attack.

Ullah, as confirmed by the Department of Homeland Security (DHS), entered the U.S. in 2011 as a chain migrant.

Under “chain migration,” new immigrants to the U.S. are allowed to bring an unlimited number of poorly-screened foreign relatives with them, creating a never-ending flow of immigration from some terror-ridden countries.

Ullah came to the U.S. through the F43 visa, allowing him to obtain a Green Card simply because his father’s brother or sister had recently been naturalized as a U.S. citizen. This process is known as “extended-family chain migration.”

Tyler Q. Houlton
✔
@SpoxDHS
.@DHSgov can confirm that the suspect was admitted to the United States after presenting a passport displaying an F43 family immigrant visa in 2011. The suspect is a Lawful Permanent Resident from Bangladesh who benefited from extended family chain migration.

NYC Scanner
@NYScanner
JUST IN: 27 y/o Terrorist who is from Bangladesh and was living in Brooklyn, told authorities “They’ve been bombing in my country and I wanted to do damage here, Terrorist was also a cab driver.

Fox News
✔
@FoxNews
.@POTUS: “Chain migration is a disaster for this country, and it’s horrible.” | Catch the full interview TONIGHT at 10p ET on @FoxNews.

Another suspected ISIS-inspired New York City terrorist, Uzbek national 29-year-old Sayfullo Saipov who is accused of murdering at least eight individuals, entered the U.S. in 2010 by winning one of the 50,000 visas randomly allotted every year under the Diversity Visa Lottery.

The Visa Lottery dolls out 50,000 visas annually to foreign nationals from a multitude of countries. The countries include those with terrorist problems, including Afghanistan, Algeria, Egypt, Iraq, Lebanon, Libya, Nigeria, Saudi Arabia, Somalia, Syria, Trinidad and Tobago, Venezuela, Yemen, and Uzbekistan.

We want a system that is merit-based. They come in on merit, they don’t come in on a lottery system. How about the lottery system? Folks did you see that? That’s the guy in New York City. The lottery system where they put names in a bin… so what they do, I would say but more than just say, they take their worst and they put them in the bin and then when they pick the lottery, they have the real worst in their hands… and we end up getting them.

We want people coming into our country who love our people, support our economy and embrace our values. It’s time to get our priorities straight.

About 9.3 million foreign nationals have come to the U.S. as chain migrants between 2005 and 2016, Breitbart News reported. In that same time period, a total of 13.06 million foreign nationals have entered the U.S. through the legal immigration system, as every seven out of 10 new arrivals come to the country for nothing other than family reunification.

This makes chain migration the largest driver of immigration to the U.S. — making up more than 70 percent — with every two new arrivals bringing seven foreign relatives with them.

Currently, only one in 15 foreign nationals admitted to the U.S. come to the country based on skills and employment purposes. Though roughly 150,000 employment-based Green Cards are allotted every year, half of those Green Cards actually go to the foreign relatives of employees.

Since 2005, the U.S. admitted 80,252 chain migrants from Iran, despite the nation being listed by the U.S. State Department as a sponsor of terrorism.

Listen To The Link Below:

Daily News With The Doctor Of Common Sense