The Vaccine Is Not Safe 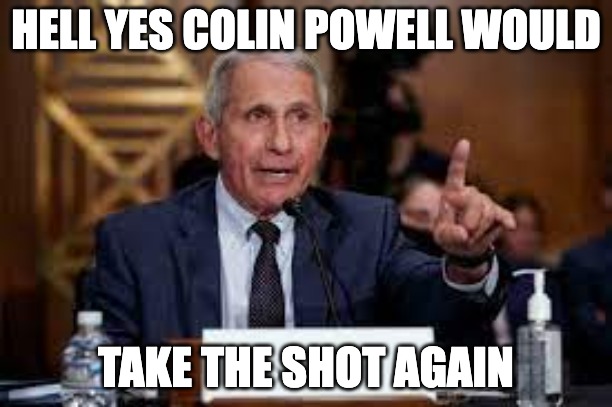 Anthony Fauci aka the Garden Gnome wants you to believe Colin Powell would still take the vaccine that may have killed him.

Well unfortunately he can’t tell us anything because the so-called FDA approve vaccine has taken him out. 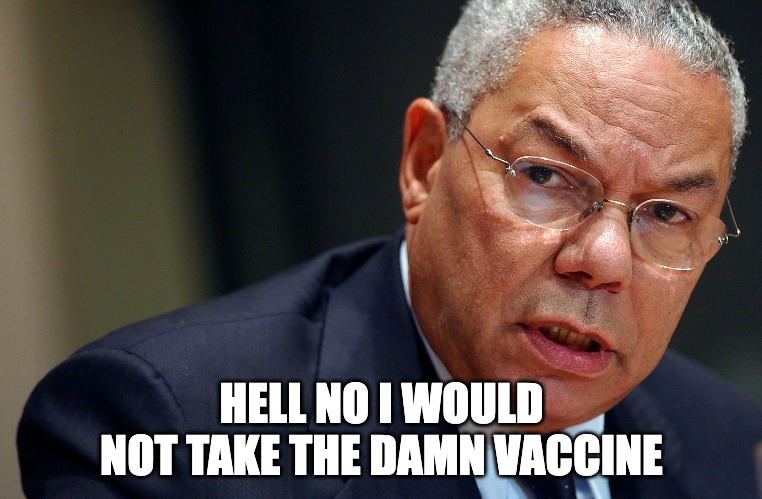 Anthony Fauci was being interviewed on MSNBC.

The host tells Fauci that the death of Colin Powell made a lot of people sit up in their seats.

Because Colin Powell was double vaccinated. But the host says it was because his immune system was compromised.

Stop right there. If these smart doctors who gave him the best care knew his immune system was not strong enough.

And you want me to trust these doctors?

I’m shocked they did not call it a breakthrough case.

The host goes on to say the conspiracy theorist like you and I say, look it does not work.

You will notice that they refer to us who don’t believe their flawed logic as conspiracy theorist.

Yet not one of these people ever referred to those who believed in Russian Collusion as conspiracy theorist.
But the Garden Gnome aka Anthony Fauci had and answer for this.

Fauci says it was sad the General Powell passed away. But you healthy Americans still need the shot that did not work for him.

And by the way, the doctors injected him with the Jab while knowing his system was compromised.

That gives me a lot of confidence in the medical industry.

Fauce goes on to say that Colin Powell would say go ahead and get vaccinated.

He wants you to believe that if Colin Powell could speak from the grave.

He will tell us to take the vaccine that killed him.

That would make him an absolute idiot if that is true. I want you to take what killed me.

Okay let me think about what the good general is saying. I want you to take what killed me.

That’s going to be a no for me!

Fauci says that the vaccine will protect you.

But he says Colin Powells case was extremely unusual.

He said to top it off Colin Powell had an immune system that was highly compromised.

He said that Colin Powell was also on therapy that farther compromised his system.

So Lil Tony aka Fauci says Powell was at a much higher risk.

To that I would ask the Garden Gnome if the doctors knew this, then why did they still give him the shot?

Fauci goes on to throw the General under the bus, by saying he did not get the booster?

So if he had got the booster it would have saved him right?

No one said anything about a booster when the vaccine first came out. Just like no one said that all Americans would need to be vaccinated before we stop the mask restrictions.

The fact is you don’t need to be an expert to see that what Fauci, the CDC, and the so-called experts have done, has not worked.