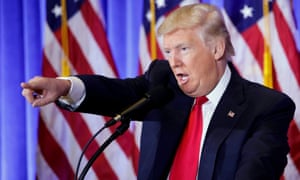 Talk radio hosts and bloggers could be given greater access to official White House press briefings once the Trump administration takes office, under a highly irregular proposal being floated that may also remove briefings from the West Wing.

Trump’s pick for White House press secretary, Sean Spicer, said on Sunday that due to “off the chart” interest in the new administration, the president-elect was considering moving briefings from the James S Brady press briefing room, which has been used by presidents to address the media since 1970, to a venue with a greater capacity.

A report published by Esquire magazine on Saturday indicated the venue could be inside the Old Executive Office Building, just west of the White House.

Spicer argued the proposal would mean “you can involve more people, be more transparent, have more accessibility”. He suggested that this would mean outlets that are not traditionally part of the White House press corps would be able to ask questions during presidential press briefings.

“There’s a lot of talk radio and bloggers and people that can’t fit in right now and maybe don’t have a permanency because they’re not part of the Washington elite media,” Spicer said, “but to allow them an opportunity to ask the press secretary or the president a question is a positive thing. It’s more democratic.”

Around 200 journalists make up the White House press corps. The Brady press briefing room holds 49 permanent seats for major media organisations, which are granted space by the White House reporters (WHCA). The Guardian is among those outlets allocated a space.

White House briefings are open any journalist that seeks access and passes security clearance, but the president more typically takes questions from major news organisations with an allocated seat.

It remains unclear how the proposal would be implemented, but it is likely to be interpreted as a hostile rebuke to conventional media outlets around the country.

Jeff Mason, the WHCA president and Reuters White House correspondent, said he had a “constructive”, nearly two-hour meeting with Spicer on Sunday. Mason “emphasized the importance of the White House press briefing room” and its proximity to West Wing officials.

“I made clear that the WHCA would view it as unacceptable if the incoming administration sought to move White House reporters out of the press work space behind the press briefing room,” Mason said in a statement. “Access in the West Wing to senior administration officials, including the press secretary, is critical to transparency and to journalists’ ability to do their jobs.”

Spicer agreed to discuss any changes to the current system with the WHCA, Mason said.

During a chaotic press conference at Trump Tower on Wednesday, the first the businessman has held since July 2016, hundreds of journalists crammed into a small pen as Trump frequently lambasted certain media organisations and occasionally individual reporters. Trump was incensed by reports on a leaked and unsubstantiated dossier, which alleged frequent contacts between his campaign team and Russian authorities, and suggested the Kremlin held compromising material that could be used to blackmail Trump.

Trump was also asked by a reporter at Breitbart News what his views were on media ethics and “fake news”, to which he replied: “Some of the media outlets that I deal with are fake news more so than anybody. I could name them, but I won’t bother. You have a few sitting right in front of us.

“They’re very, very dishonest people, but I think it’s just something we’re going to have to live with. I guess the advantage I have is that I can speak back.”

According to the Associated Press, Breitbart News, branded by critics as a racist, far-right news site, was the only media organisation to have a reserved seat in the front row for the conference. Steve Bannon, Trump’s incoming chief strategist and senior counselor, previously served as the site’s executive chairman.

Trump was interviewed for around 30 minutes by Jones in December 2015, and later called Jones a “nice guy”. Jones claimed in November that Trump called him to thank him for his support after winning the presidential election.

One proposal on dealing with the media that was pitched to President-elect Donald Trump’s transition team calls for drug testing the White House press corps.

Trump’s attacks on the mainstream media were a cornerstone of his campaign and last week he called BuzzFeed a “failing pile of garbage,” but forcing reporters to undergo random drug tests would provoke a media meltdown.

The pee-in-a-cup proposal (yellow journalism indeed) was one of 13 ideas one candidate for White House press secretary wrote in November in a confidential memo to members of the Presidential Transition Team’s Executive Committee.

He didn’t get the job, and I am not naming him because his proposal could harsh the mellow of his fellow journalists.

Sean Spicer, who was spokesman for the Republican National Committee, is Trump’s press secretary, and told me, “I support whatever security measures are recommended by the Secret Service.”

“Journalists who are at the White House more than one day per week should be subject to drug screenings to occur no more than twice a year at random times,” the memo states. “Refusal to comply should exclude them from credentialing entirely.”

The job applicant also proposed taking away the right of the White House Correspondents’ Association to control reporters’ seating arrangements in the press briefing room.

The Trump administration, the candidate wrote, “should clear a path to communicate more directly with the people and end White House press practices that serve no useful purpose other than feeding the beast.”