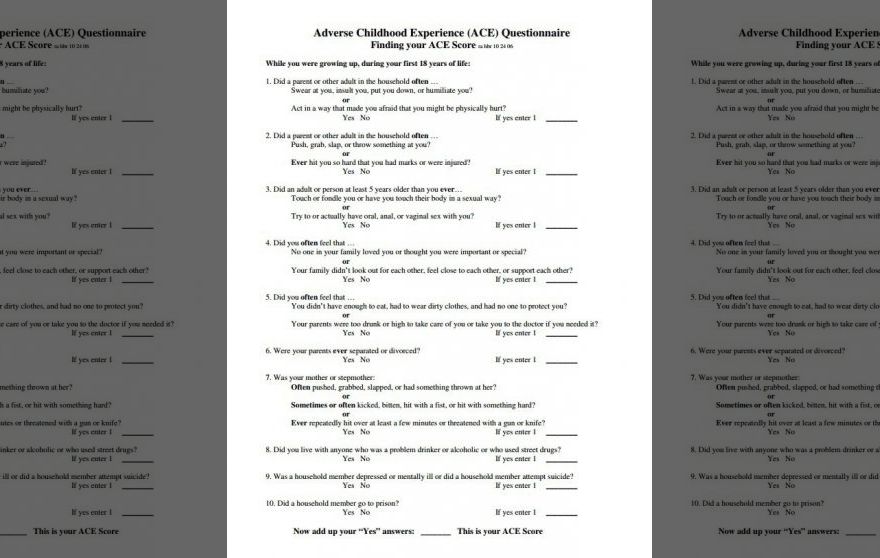 But that’s what she and a number of other parents in the small community of Jerome, Idaho have been facing since last month.

It was created by a physician in 1985 as a means of determining childhood trauma in adults and consists of 10 questions such as, “Did an adult or person at least 5 years older than you ever touch or fondle you or have you touch their body in a sexual way or try to actually have oral, anal, or vaginal sex with you?” Another question is, “Did you often feel that your parents were too drunk or high to take care of you or take you to the doctor if you needed it?” And then this one: “Was a household member depressed or mentally ill or did a household member attempt suicide?”

Heritage did not seek parental consent before distributing the survey.

She said she went back to the Heritage Academy and obtained a copy of the ACE questionnaire only after one of her kids climbed into the car and started telling her about it. Sobotka-Ramos is just one of several parents, grandparents and community members deeply upset and determined that the school administrator who issued the survey, licensed counselor Christine Ivie, be held accountable.

“If the Heritage Academy School board will not do its job and respect its stakeholders, we will also hold them responsible,” Sobotka-Ramos said. “We will do whatever is necessary to protect our children and the future children.”

The Idaho Public Charter Schools Commission told Fox News that while they are aware of the matter, it is one more appropriately addressed by the school board. The board, however, did not respond to a request for comment but did issue a statement on its Facebook page thanking parents for their concerns and urging them to reach out to Ivie to schedule an appointment to discuss it further.

Apparently, that’s not going to cut it for many Heritage parents. Over the past few weeks more than 100 locals have come together in their own private Facebook group, Call to Action: Heritage Academy, to express anger and “seek justice.” Members claim that the survey caused a great deal of stress for students, and that some are enduring deeper levels of trauma due to the re-surfacing of past events.

“This has definitely impacted our town. Parents feel betrayed and are very hurt,” Sara Bateman, mother to a 11-year-old son, whom she has since pulled from the school, said. “Many of us are looking to take legal action and I have personally been in contact with many state and local officials.”

Bateman says she is one of several parents who have removed their children from classes and that other parents will keep their child enrolled only until the end of this school year.

Sandy Ricketts, the grandmother of nine- and 11-year-old students, called the survey an “invasion of our children’s innocence.” Mystie Bremer said she was furious that her 11-year-old grandson was subjected to “vile language.”

Heritage Academy, which opened in 2011 and now has about 175 students, is a unique public charter school in Idaho. It seeks to meet the academic needs of the children in rural Idaho in what is deemed a “diverse, high-risk population” with very high poverty levels.

Parents say they collected copies of the ACE survey – in its original form — either from their children or by going to the school personally. However, Ivie told Fox News that questions were modified for students to be “age appropriate.” She noted, for example, that the question about sexual fondling was re-written to read, “Has an adult or teenager touched where your swimming suit covers and made you uncomfortable?”

According to Ivie, the paraphrased survey was given (or read) to younger students. She said middle-school students received the regular adult version because many middle schools have a significant number of students dealing with the items on the survey.

Ivie also emphasized that the ACE survey is used widely by pediatricians, social work supervisors, county prosecutors and national education organizations. She apologized that the “anonymous assessment … caused anyone any anxiety,” stressing that it was not aimed at targeting parents but merely to help them develop the most useful programs in the school amid budgetary restrictions.

“It is used to identify stress factors in a school or community. It is designed to help us understand the challenges the children are dealing with and find resources that will empower the parents and children to be successful,” she said.

Ivie maintained that “a lot of good” has come out of the survey, including encouraging struggling parents to seek help. She also emphasized her deep care for the community and the children, and the difficulties she and other educators face in trying to address such serious but often swept undercover issues. Her hope now is that students are discussing those survey items with a trusted adult and concerns can be addressed.

And while many parents remain aghast, several have also supported Ivie, insisting that she and the staff are “warm and loving and care about the welfare of each and every child,” and that if she were to leave Heritage “it would be a great loss to the children and their quality of education at that school.”

“I’m Shocked That A Muslim Could Have Done This” (Sarcasm)

Police have cleared three neo-Nazi suspects in the killing of three schoolchildren and a rabbi at a Jewish school in Toulouse, France. The suspects were former soldiers who were discharged from duty for neo-Nazi activity in 2008.
All three were interrogated by the police.
French authorities now believe the killer was motivated by Islamic extremism or racism, Israel Radio reported.
It is the third shooting attack in the Toulouse region in just over a week, and the suspect may be linked to all of them. The previous shootings targeted and killed soldiers of North African origin.
The soldiers, part of an elite paratrooper regiment, were let go from the military after a photo of them surfaced of them saluting a Nazi flag with a swastika.
Rabbi Jonathan Sandler, 29, his 4-year-old and 5-year-old sons Gabriel and Arieh, and 7-year-old Miriam Monsonego were killed Monday outside the Ozar Hatorah school in the southern French city.
In the attack, a gunman drove a scooter and used a handgun to shoot and kill the victims. Police believe the killer may have taped the killing, and think he may plan to post the video on the Internet.
http://www.timesofisrael.com/france-clears-three-neo-nazi-suspects-in-jewish-school-shooting/

FORT WAYNE, Ind. –  A babysitter and trusted neighbor has confessed that he bludgeoned a 9-year-old Indiana girl to death with a brick then dismembered her, hiding her head, hands and feet at his home and dumping the rest of her remains nearby, police said Tuesday.

According to the affidavit, Plumadore told police that after beating Aliahna to death, he stuffed her body into trash bags and hid her in the freezer at his home in a rundown trailer park in Fort Wayne. He said he later chopped up her body and stuffed her remains into freezer bags.

Police said Plumadore told them he had hidden Aliahna’s head, feet and hands at his trailer and discarded her other remains at a nearby business. Police obtained a warrant to search his trailer on Monday and found the body parts.

The affidavit does not provide details about why Plumadore killed the child.

A judge ordered Plumadore held without bail or bond at an initial hearing Tuesday, sheriff’s department spokesman Cpl. Jeremy Tinkel said. He has yet to be formally charged in Aliahna’s death.

Aliahna and her two younger sisters were staying with Plumadore because their mother had been sick with the flu.

Plumadore told The Journal Gazette on Sunday that Aliahna disappeared from his home Friday morning while he was sleeping after having gone to a gas station about a mile away to buy a cigar.

Authorities have said the store’s surveillance video shows him there about that time.

Aliahna wasn’t reported missing until Friday night. Plumadore said the younger girls told him their mother had picked her up and he didn’t realize until hours later that this wasn’t true.

On Saturday, more than 100 emergency workers searched for Aliahna around the trailer park on the city’s north side where Aliahna and Plumadore lived. FBI agents were there Monday.

The girl’s relatives told the newspaper that Plumadore had cared for Aliahna’s ailing grandfather until his death early this month and was living in her grandfather’s mobile home.

“He was a trusted family friend,” Aliahna’s step-grandfather, David Story, told The Associated Press late Monday, saying he was surprised by the arrest.

Sheriff Ken Fries said investigators questioned Plumadore on Friday and Saturday and that he was arrested Monday after being interviewed by detectives for several hours more.

“The story just didn’t make sense to our investigators or to me when I first heard it,” Fries said Monday night. “I thought this is the guy we needed to focus on. If we are going to find her, he’s going to be the one who has the answers for us.”