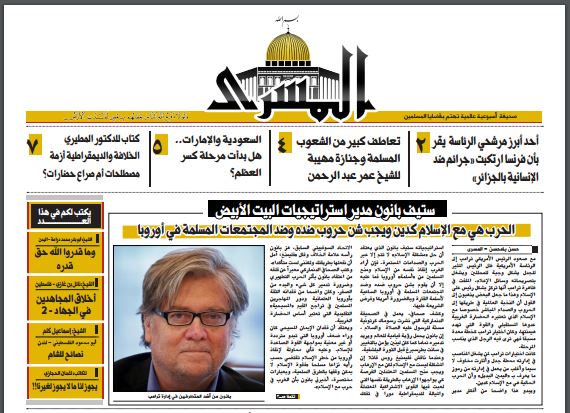 The way al-Qaeda tells it, the West is locked in an existential war with Islam. This is how the terrorist group justifies its violence and its fundamentalist ideology. And now it has found a Westerner to back them up — top Trump adviser Steve Bannon.

Bannon graced the cover (above the fold!) of the most recent al-Qaeda-linked Al Masra newspaper. That prominence, University of Oxford researcher Elisabeth Kendall told Quartz, is “striking.”

The piece focused on Bannon’s views of Islam, saying he believes that “the forces of Islam cannot be stopped by peaceful means.” The paper cited a conversation Bannon had with a Danish journalist in May 2016. It also claimed that Bannon believes that the struggle is really between Christianity and Islam, not just Islam and the West. And it suggested that Bannon has “lost confidence in secular Europe, and sees Muslim immigrants as partially responsible for the retreat of traditional Christian values.”

Like other Trump advisers (and former advisers), Bannon has spoken publicly about these beliefs. In 2014, he gave a speech to the Vatican via Skype in which he said, “We’re now, I believe, at the beginning stages of global war against Islamic fascism.” On other occasions, he’s suggested that the “Judeo-Christian West” is at war with “expansionist Islamic ideology.”

On his radio show in 2015, he called for a complete halt to allowing Muslim immigrants into the United States. (“Why even let ’em in,” he asked Ryan Zinke, then a Republican congressman representing Montana). And as my colleagues have reported:

On one of the first Breitbart Radio shows, in early November 2015, Bannon praised the growing movement in Britain to exit the European Union. He said that the British had joined the E.U. merely as a trading federation but that it had grown into a force that had stripped Britons of sovereignty “in every aspect important to their own life.” Bannon has been supportive of similar movements in other European countries to pull out of the union.

“The fact that [Al Masra] would put this so prominently on the front page — as lead article — indicates it has traction, that this is a way to win support. It plays entirely into their narrative that they were right about the West’s war on Islam all along,” Kendall said. “It shows us how much al-Qaeda is trying to capitalize on some of the policies of the Trump administration.”

It’s true that Islamist militants have a soft spot for Trump — his rhetoric, they say, is a useful propaganda and recruiting tool. On Election Night, Muslim extremists around the world celebrated Trump’s win, suggesting that it might usher in a civil war. “Rejoice with support from Allah, and find glad tidings in the imminent demise of America at the hands of Trump,” said the Islamic State-affiliated al-Minbar Jihadi Media network, according to the SITE Intelligence Group. “Trump’s win of the American presidency will bring hostility of Muslims against America as a result of his reckless actions, which show the overt and hidden hatred against them.”

Al-Qaeda and Islamic State supporters said Trump’s win exposed America’s “hatred of Muslims,” SITE director Rita Katz told USA Today. They likened it to Brexit and suggested that it will lead to the downfall of the West.

Since then, America has featured much more prominently in jihadi media. Al Masra, in particular, has been tracking developments in America quite closely since November. Kendall noted that a February 2017 Al Masra issue mentioned America twice as often as one from January 2016.

And indeed, there’s been no shortage of things to cover — data from jihadi discussion forums suggest that Islamic State supporters backed the travel ban, because it could be used to reinforce the idea that Islam is under attack by the West. “It’s far more potent than any video or other piece of propaganda,” Charlie Winter, a senior fellow at the International Centre for the Study of Radicalization and Political Violence at King’s College in London, told CNN.

But Steve Stalinsky, who runs the Middle East Media Research Institute, says that terrorist sympathizers have been making the same argument — that the West hates Islam — for decades.

People are saying that Trump shows America’s true colors, he said. But it’s nothing new. These same sentiments existed under Obama, they say, even though his rhetoric was less inflammatory. “They’d rather Trump than Obama, a snake who hides what he’s doing,” Stalinsky said. Terrorists sympathizers say, “We’re grateful to have Trump removing Obama’s mask.”

The message, Stalinsky says, is this: “There’s a new fool in the White House.” But he’s just replacing an old fool. And the goal — “to ignite the ground under America’s feet” — remains the same.