Horrifying moment a truck driver mows down soldiers in Jerusalem – and REVERSES over them – killing four and injuring 15 before being shot dead at the wheel, as Israeli PM blames attack on ISIS

A Palestinian has rammed a truck into a group of Israeli soldiers visiting a popular tourist spot in Jerusalem, killing four and wounding at least 15 people, in a shocking copycat of the Berlin and Nice terror massacres.

Shocking video from the scene shows the driver reversing back over the soldiers, trapping ten under his wheels, during the sickening attack on Sunday.

Israeli Prime Minister Benjamin Netanyahu alleged the attacker ‘supported’ the Islamic State group, though he provided no details on what led to the finding.

Speaking at the scene of the attack, Mr Netanyahu said the attacker has been identified and ‘according to all the signs he was a supporter of the Islamic State.’

He says there ‘definitely could be a connection’ between Sunday’s attack, which killed four Israeli soldiers, and recent attacks in France and Germany. 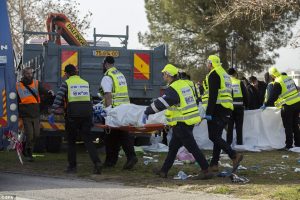 The terrorist was shot dead by Israeli forces at the location overlooking holy sites in the Old City such as the Dome of the Rock and providing one of the most spectacular views of Jerusalem.

Chaos broke out at the scene when the truck ploughed through the crowd, with hundreds of soldiers having arrived there as part of a tour for troops about the history of Jerusalem.

‘A lone terrorist drove his truck into a group of soldiers standing on the side of the road,’ police spokesman Micky Rosenfeld told reporters at the scene.

‘They got off the bus, and as they were getting off the bus and getting organised, he took advantage.’

Israel’s military said one of its soldiers fired on the attacker and distributed video of him saying he shot after realising it was not an accident.

Multiple bullet holes could be seen in the windshield of the truck.

Police only confirmed four people were dead, but a medic at the scene said they were soldiers.

Medics also reported that three of the victims were women, while all four were in their 20s.

Netanyahu says Israel has blockaded Jabel Mukaber, the east Jerusalem neighborhood where the truck driver lived, and is planning other measures to prevent similar attacks.

The group of soliders were standing beside the bus on some grass when the truck bounced into the air onto the promenade and drove through the victims without warning.

The killer then stood on his brakes and reversed, trapping some ten of his victims under the truck.

Some of the surviving soldiers managed to jump clear and opened fire, riddling the cab of the truck killing the man.

The soldiers were on a cultural sightseeing tour of the city when they were attacked.

The atmosphere in Israel has also been charged following the manslaughter conviction last week of an Israeli soldier who fatally shot a Palestinian attacker who had already been badly wounded and was lying on the ground.

Eytan Rund, a tour guide who said he shot the attacker Sunday, said soldiers in the area were slow to respond. He said he believed the ‘hesitation’ was connected to last week’s verdict.

‘The second biggest miracle is that my gun wasn’t lost from this.’

He said he realised that attack was intentional after the truck ‘suddenly turned around to probably run over again’.

‘I pulled out the gun I fired one shot at the wheels and I realised this will not do and while he [the attacker] was driving I ran to overtake him from his left side, I stood in front of him and started shooting my entire magazine until it was over.

‘He kept on driving after… I don’t know if my bullets were the one that wounded him and made him stop, but without a doubt he kept on going a few metres after I shot him.’

It is understood soldiers fired at least 18 rounds at the terrorist, who is believed to be from an Arab area of east Jerusalem.

‘I saw a truck that went on the side of the road. Soldiers starting shooting. There were orders and screaming everywhere. They told them to hide behind the wall because there was fear of another attack.

‘There was no sense in that reverse. He drove backward to crush more people. That was really clear.’

The Palestinian Hamas movement praised the attack, but did not take responsibility.

Hamas spokesman Abdul-Latif Qanou called it a ‘heroic’ act and encouraged other Palestinians to do the same and ‘escalate the resistance.’

Qanou said Sunday’s attack proves the wave of Palestinian violence has not ended, despite a recent lull. He says ‘it may be quiet, it may linger, but it will never end.’

Hamas, which rules the Gaza Strip, is pledged to Israel’s destruction.

Jerusalem Mayor Nir Barkat called on residents to be wary but carry on with their everyday life.

‘Unfortunately, there is no limit to the cruelty of terrorists who spare no means in killing Jews and disrupting their way of life. Those who incite and support terror must pay a heavy price.’

Police spokeswoman Luba Samri says the truck veered off course Sunday and struck a group of soldiers who had just disembarked from a bus.

Palestinian security officials in the West Bank city of Ramallah said he was a Palestinian from the east Jerusalem neighbourhood of Jabal Mukaber, close to the scene.

An ISIS terror magazine advised its followers to use large trucks when carrying out their planned atrocities, targeting ‘pedestrian congregated streets’ and ‘outdoor markets’.

The magazine, Rumiyah, said trucks, unlike knives, ‘arouse absolutely no doubts’, citing the example of Mohamed Lahouaiej Bouhlel who murdered 86 people in Nice on July 14 and injured 400.

The twisted publication claimed a vehicle ‘presents the opportunity for terror for anyone possessing the ability to drive a vehicle’.

It said: ‘Likewise, it is one of the safest and easiest weapons one could employ against the kuffar, while being from amongst the most lethal methods of attack and the most successful in harvesting large numbers of the kuffar.’

The terror training manual said the ideal vehicle needed to be reasonably quick, heavy and ‘double-wheeled, giving victims less of a chance to escape being crushed by the vehicle’s tyres’.

Importantly, the truck needs ‘a slightly raised chassis and bumper, which allow for the mounting of sidewalks and breaching of barriers, if needed’.

The magazine said any event with a large crowd presents a good possible target.

‘The target should be on a road that offers the ability to accelerate to a high speed, which allows for inflicting maximum damage on those in the vehicle’s path.’

The potential terrorist is told he must ensure that he has pledged his allegiance to ISIS, even by writing a note and leaving it in the vehicle.

Chillingly, the magazine said: ‘It is imperative that one does not exit his vehicle during the attack. Rather he should remain inside, driving over the already harvested kuffar, and continue crushing their remains until it becomes physically impossible to continue by vehicle.’

An Israeli bus driver who witnessed the incident said on the radio the truck ploughed into a group of soldiers, and that they fired on the driver, who reversed direction and ran over them again.

‘They shot him, until they neutralised him,’ said the bus driver, who gave his name only as Moshe.

The attack matched the deadliest in a more than year-long wave of Palestinian shooting, stabbing and vehicle attacks against Israelis. The two gunmen in last June’s attack in Tel Aviv also killed four people, who were eating dinner at a popular tourist spot.

Since September 2015, Palestinian attackers have killed 40 Israelis and two visiting Americans. During that time, 230 Palestinians have been killed by Israeli fire.

The violence has slowed of late but tensions have been rising since President-elect Donald Trump promised to move the US Embassy from Tel Aviv to Jerusalem.

The Palestinians claim Israeli-annexed east Jerusalem as their capital, and have warned that moving the embassy would cross a ‘red line’ and undermine negotiations over one of the most sensitive issues in the Israeli-Palestinian conflict.