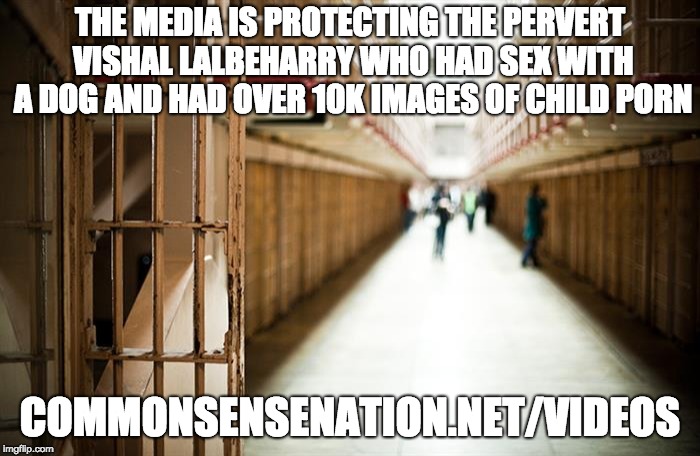 A Queens creep who allegedly filmed himself having sex with a dog has been charged with downloading and sharing thousands of child porn images, prosecutors said Monday.
Queens prosecutors on Monday hit Vishal Lalbeharry, 30, with a 17,725-count indictment, accusing him of possessing and promoting photos and videos of children as young as six months old being abused by adult men and women.
When police searched his home, they also found 16 appalling videos of his congress with a Pomeranian.
“The images accumulated by this defendant allegedly contained some of the most horrific ways imaginable to sexually abuse a child — even babies were defiled,” Queens District Attorney Richard Brown said.

“I can not stress it enough: Pictures and videos of children being sexually abused is, for all intents and purposes, crime scene images. The children are real people and they must live with the scars on their bodies as well as in their memories forever.”
Lalbeharry was caught by a detective using software that finds internet addresses that are sharing child porn, prosecutors said. The software linked Lalbeharry’s computer address to 1,150 file downloads — some with grotesque titles like “Babies F**ked,” “Judyan 04,” and “2006 Tara 7 yr.”
A deeper search found that between March and April last year, Lalbeharry used a network to download 10,240 photos and videos of children, none of them older than 10, prosecutors said.
When he was initially arrested April 20, he claimed no one else uses his computer, prosecutors said. He also said the photos were downloaded “by mistake.”
“While I was downloading regular porn, some images of child pornography were in the files…I have seen this by mistake,” he told police.
Lalbeharry works in hotel restoration. He was arraigned and released on $35,000 bail. He is due again in court on April 22.
“We certainly understand the seriousness of the matter. We are looking to resolve it in the court system,” Lalbeharry’s lawyer Todd Greenberg said. “I do feel that a 17,000-count indictment is excessive and I’ve never seen that done before in this type of case.”
A relative speaking outside Lalbeharry’s house railed against the media, and downplayed the charges against him.
“The press is making a mountain out of a molehouse,” the relative said, mangling the popular idiom. ““He was only viewing images on the internet. The D.A. is a jackass.”
The relative also denied Lalbeharry videotaped himself having sex with a dog. Both he and neighbors said Lalbeharry didn’t own a Pomeranian at his home.
“He was just looking on a screen. If he’s plastered as a child molester, that’s blasphemy,” the relative said. “Do you think that looking at an image on a screen is as horrific as violence?”
Victims shown in child pornography have in recent years sought restitution from convicted child porn suspects — saying they experience fresh trauma, and often crippling paranoia, when videos and photos of their rapes are continuously shared over the internet.
In 2014, the Supreme Court ruled that suspects who possess child porn can be required to pay restitution to victims, but limited the amount they can be forced to pay.
If convicted, Lalbeharry faces up to seven years in prison.