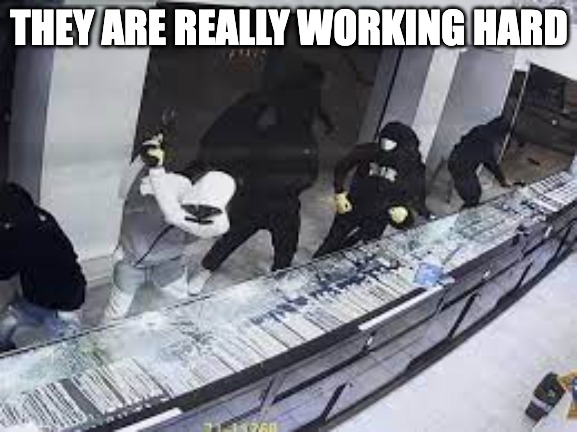 California has faced two weeks of sustained “smash-and-grab” burglaries around the state involving flash mobs of thieves running into stores, smashing glass cases, and running out with thousands of dollars worth of jewelry, purses, electronics, and other goods.

While smash-and-grab burglaries have become commonplace in California — particularly in San Francisco — the quick succession of the crimes has put shoppers and businesses on edge.

Law enforcement say thieves are being recruited for up to $1,000 to steal goods that are then shipped across state lines and sold on the Internet, making it hard for cops to track the criminals, according to the Daily Mail.

“We’re not talking about someone who needs money or needs food. These are people who go out and do this is for high profit, and for the thrill,” said Ben Dugan, president of the Coalition of Law Enforcement and Retail, according to the outlet.

On Monday, November 15 at around 7:30 p.m. PST, nine suspects wearing masks entered the Iceberg Diamonds store located in the Sun Valley Mall in the East Bay Area suburb of Concord, California, and “wiped out the inventory,” according to SF Gate.

The burglary took place while the mall was open, according to the Concord Police Department. Mall customers believed they heard gunshots, but it was the sound of hammers smashing glass, the police said.

When employees tried to intervene, the suspects “held them off with their hammers,” according to police. The suspects fled before police were on scene.

SMASH AND GRAB: Surveillance video from @ConcordPD_CA shows an organized robbery at a jewelry store in the Sun Valley Mall. @abc7newsbayarea pic.twitter.com/XHeMBYaRMS

On Saturday, November 20, at about 900 p.m. PST, as many as 90 suspects carrying crowbars hit a Nordstrom’s in the nearby shopping center at Broadway Plaza in Walnut Creek, California.

The store was still open at the time, and four employees were assaulted – one with a knife – two others were struck or punched, and one was pepper-sprayed, according to KRON4 and the Los Angeles Times.

Suspects had parked about 25 cars in front of the store, and stormed three separate entrances. Video showed suspects in masks and dark clothing running back to their parked cars carrying bags of merchandise. Police said they made off with $100,000 to $200,000 worth of goods.

The charges include robbery, burglary, conspiracy, possession of stolen property, illegal possession of a firearm by a felon and carrying a concealed weapon, according to KRON4.

#Breaking About 25 cars just blocked the street and rushed into the Walnut Creek Nordstrom making off with goods before getting in cars snd speeding away. At least two people arrested at gunpoint. pic.twitter.com/AG3R94M9L3

On Sunday, November 21, there were at least four smash-and-grab burglaries and at least two attempted burglaries on Sunday across California.

In Beverly Hills, suspects attempted to use a sledgehammer to enter Louis Vuitton and Saks Fifth Avenue stores but were unable to get into the stores, according to the Times. There were multiple suspects traveling in several vehicles, according to City News Service.

In the Bay Area, about 30 to 40 suspects wearing masks arrived in about 20 cars and tried to smash the glass front door to the RealReal boutique in Palo Alto at around 11:20 p.m. PST but were unable to get in. Two women in a green 2017 Ford Escape SUV with headlights off and no license plates were later arrested in connection with the burglary and caught with at least $15,000 from a different RealReal boutique that was burglarized earlier that night in Larkspur, according to the Associated Press and Palo Alto Online.

The Larkspur burglary happened around 9:13 p.m. PST and involved about 40 suspects. The group smashed windows, broke in, and stole merchandise, according to the Palo Alto Online. Police booked the two women, a 20-year-old from Richmond and 21-year-old from Vallejo, into the Santa Clara County Main Jail on suspicion of attempted commercial burglary and conspiracy, both felonies.

Earlier in the day at around 6:30 p.m. PST, a group of suspects — two men and two women — went into a Lululemon store in Palo Alto and stole more than $40,000 worth of merchandise. One of the men had a “visible gun in his waistband,” according to The Mercury News.

At around the same time, suspects hit the Westfield Valley Fair mall in San Jose and stole more than $7,000 of merchandise from a sunglasses store, fleeing in four or five cars with their license plates covered, according to the The Mercury News.

Several stores at the Southland Mall in Hayward were also burglarized by hammer-wielding suspects who stole jewelry, sunglasses, and clothing. Employees reportedly screamed in terror as the heist unfolded.

On Monday, November 22, a group of about 20 suspects tobbed the Grove shopping center in Los Angeles, hitting a Nordstrom’s and a CVS, according to the Daily Mail. They smashed a window and made off with about $5,000 worth of merchandise from Nordstrom’s, and $8,000 from a cash register in the CVS.

The suspects fled the scene in at least four vehicles and three were arrested, according to the City News Service. Police recovered clothing, at least one cash register, and gloves from the suspects’ car.

In another burglary earlier at about 9:45 p.m. PST, six suspects robbed a CVS Pharmacy in Los Angeles, taking three cash registers filled with about $8,500 in cash, according to the City News Service.

On Wednesday, November 24, there were at least three smash-and-grab robberies across California — two in Southern California, and another near the Bay Area.

In Southern California, suspects hit the the Beverly Center in West Hollywood and a Nordstrom’s at the Westfield Topanga & The Village shopping center in Canoga Park, Los Angeles.

At the Beverly Center, there were two incidents involving groups of suspects entering several stores at the shopping center, grabbing merchandise and running out.

In Canoga Park, “an organized group” entered Nordstrom’s at around 7:00 p.m. PST and made off with handbags worth an estimated $25,000, according to the Los Angeles Police Department and City News Service. They also attacked a security officer with bear spray. The security officer was taken to the hospital for treatment. According to City News Service, the group contained at least five men, including one wearing an orange wig. They jumped into a newer model gray Ford Mustang and sped away from the scene.

The Los Angeles Police Department is investigating Flash Mob Thefts that occurred at the Beverly Center and Topanga Mall pic.twitter.com/DPj4cRivWa

In Santa Rosa, about an hour from San Francisco, a group of four suspects hit an Apple store at Santa Rosa Plaza on Wednesday morning in broad daylight, according to the Daily Mail. They stole $20,000 worth of merchandise, according to the outlet. The suspects are believed to be between the ages of 14 and 18.

California Gov. Gavin Newsom has vowed to crack down on the retail crimes. However, Rick Caruso, a real estate developer who is considering a run for Los Angeles mayor, told ABC7 that he blames the crimes on elected leaders.

Observers of the crime wave point to California’s 2014’s Proposition 47, which made thefts of $950 or less a misdemeanor versus a felony.

Once people realized that they were unlikely to be arrested or prosecuted for stealing below $1,000, they, of course, responded to the incentive. For their part, the stores advise employees not to interfere with shoplifters lest they get hurt. Many crimes don’t even go reported.

“This is a polity deciding that it is more important to stay its own hand from arresting and jailing criminals than to protect businesses from getting robbed, protect duly employed people from having to watch cretins flout the law and protect neighborhoods from losing retail outlets that they depend on,” he added.