The U.S. imposed fresh sanctions on Iran as President Donald Trump sought to punish Tehran for its ballistic missile program, prompting a warning from the Islamic Republic that it will respond in kind.

The Treasury Department published a list Friday of 13 individuals and 12 entities facing new restrictions for supporting the missile program, having links to terrorism or providing support for Iran’s hard-line Islamic Revolutionary Guard Corps. The entities include companies based in Tehran, the United Arab Emirates, Lebanon and China.

In response, Iran “will take action against a number of American individuals and companies that have played a role in generating and supporting extremist terrorist groups in the region or have helped in the killing and suppression of defenseless people in the region,” the Foreign Ministry said in a statement published by the state-run Islamic Republic News Agency. It said the targets of its sanctions will be named later.

The Trump administration has sought to take a harder line on Iran, banning its citizens from entering the U.S. and accusing the nation of interfering in the affairs of U.S. allies in the Middle East. But the U.S. sanctions announced Friday were limited in scope, serving mostly as a warning signal.

“These are not major players,” Sam Cutler, a sanctions lawyer at Horizon Client Access in Washington, said of those on the list. “It seems to be a follow-up on a previous action that the Obama administration took in terms of identifying people in existing networks that had been previously sanctioned. I see this as consistent with prior policy rather than anything new, the rhetoric notwithstanding.”

The sanctions wouldn’t affect a deal signed between Boeing Co. and Iran’s national carrier in December, according to a Trump administration official who briefed reporters on condition of anonymity. The agreement to sell 80 planes is valued at $16.6 billion and is the first of its kind since 1979.

“This action reflects the United States’ commitment to enforcing sanctions on Iran with respect to its ballistic missile program and destabilizing activities in the region,” the Treasury Department said in its statement. It called the actions “fully consistent” with a nuclear accord Iran reached with the U.S. and five other world powers.

While Trump’s decision to take action against Iran early in his administration pleased U.S. lawmakers in both parties who were never comfortable with President Barack Obama’s tentative rapprochement with Iran, it could unsettle domestic Iranian politics as President Hassan Rouhani seeks re-election in May.

“With the increase in sanctions, the perception that the U.S. might be rolling back on the Iran deal — and the anti-Iran mood that is emerging in Washington — will further empower hardliners in Iran, where the rhetoric will be, ‘we told you so — these people cannot be trusted,” said Maha Yahya, director of the Carnegie Middle East Center.

A second administration official said the sanctions were pulled together after extensive consultation between various government agencies and the National Security council. The official said the U.S. wants to work with Iran when it abides by its international commitments, but will continue to pressure Iran to change its behavior.

“Iran is playing with fire — they don’t appreciate how ‘kind’ President Obama was to them. Not me!,” Trump tweeted early Friday. 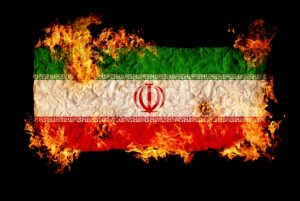 Echoing that sentiment, National Security Adviser Michael Flynn said in a statement after the sanctions were announced that “the days of turning a blind eye to Iran’s hostile and belligerent actions toward the United States and the world community are over.”

The added sanctions were praised by Republican Senator Bob Corker of Tennessee, chairman of the Foreign Relations Committee, who said it “makes clear that it is a new day in U.S.-Iran relations and that we will no longer tolerate Iran’s destabilizing behavior.”

Ahead of the announcement, Iranian Foreign Minister Mohammad Javad Zarif said, “Iran unmoved by threats as we derive security from our people.” He added later: “We will never use our weapons against anyone, except in self-defense.”

Tensions between the two sides were already escalating before the missile tests. While the missile tests didn’t contravene the nuclear accord signed in 2015, they are seen by some nations as going against a UN Security Council resolution that enshrines the agreement.

A third administration official said the recent missile test defied the resolution because the missile met payload and range parameters that make it capable of carrying a nuclear warhead. The official called Iran’s missile launches extremely provocative and destabilizing.

Still, the new sanctions weren’t directed at Iran’s nuclear program and wouldn’t directly affect the agreement forged under Obama’s administration that eased restrictions in exchange for Iran’s promise not to develop nuclear weapons.

For its part, Iran has urged the U.S. not to overreact to the tests. Defense Minister Hossein Dehghan insisted they were part of Iran’s ongoing defense program and were not illegal, according to the Tasnim news agency.