Obama Is A Fraud 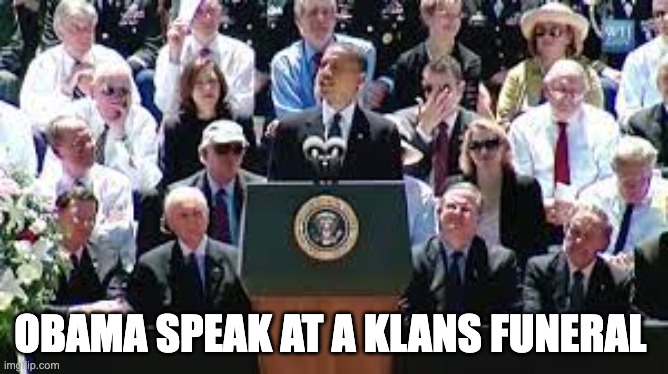 Katie Hobbs has been convicted in a Court of Law twice for being a racist. This is well documented so why would Barack Obama endorse her? The simple answer is that Obama is amoral.

Larry Sinclair wrote a book that is still on Amazon today and no one has proved that anything in the Book was a lie. The book is called “Barack Obama & Larry Sinclair: Cocaine, Sex, Lies & Murder?” But the media ignored this story to protect Obama.

Also let’s not forget while Obama is always talking about racism when it is convenient. He attended the card-carrying Klan member’s Robert Byrd’s funeral. Obama even called Robert “A Voice of Principle and Reason”

Mrs. Talonya Adams who sued Katie Hobbs twice and won. She said “of all the ‪#KatieHobbs sympathizers the endorsement of Barack Obama is the greatest disappointment. Partisanship aside no one w/racial animus is fit to serve as ‪#AZGov. Katie Hobbs is a racist, a career politician w/a pattern of racism and sexism against Black women. ‪#Shameful”.

Of all the #KatieHobbs sympathizers the endorsement of @BarackObama is the greatest disappointment. Partisanship aside no one w/racial animus is fit to serve as #AZGov.@KatieHobbs is a racist, a career politician w/a pattern of racism and sexism against Black women. #Shameful https://t.co/TU8rK5niqW

This just proves what I have always said about the blacks and whites who support Obama. The only reason that they support him is because he is half black. It also proves that those who support him are really the real racist. Because even when he supports racist you still ignore because of your belief system. And those belief systems are not based on substance or principles that are based on truth or fear of God.

Barack Obama is speaking out about how he wants to use the film projects he develops with Netflix to heal the political divide and tell America’s stories.

Earlier this week, Netflix announced it is partnering with Barack and Michelle Obama to develop original content for the video streaming giant. Initially, no real details were released — including the actual price tag of the contract. But three days later Obama has filled in some of the blanks about his plans, Business Insider reported.

Speaking at a Las Vegas tech conference hosted by cybersecurity company Okta, Obama waxed poetic about the “stories” Americans have to tell and said he wants to use his multi-year contract with Netflix to help “train the next generation of leaders.”

Barack Obama said he relied on “stories” to fuel his political career. “Everyone has a story that is pretty sacred” about their life, Obama said. Listening to people’s stories is what helped him better serve, he explained.

“We want to tell stories. This [Netflix deal] becomes a platform. We are interested in lifting people up and identifying people doing amazing work,” Obama said, adding, “We did this in the White House.”

Obama related meetings to hear the stories of Hamilton creator and Broadway producer Lin-Manuel Miranda and rocker Bruce Springsteen, and he noted that identifying talent in a similar fashion is his intent with Netflix.

Obama said he wants to produce stories “we think are important, and lift up and identify talent, that can amplify the connections between all of us. I continue to believe that if we are hearing each other’s stories and recognizing ourselves in each other, then our democracy works.”

“We are all human. I know this sounds trite, and yet, right now globally, we have competing narratives,” Obama said.

The ex-president also warned against “tribalism,” saying that when people feel threatened, “We go tribal. We go ethnic. We pull in, we push away.”

He concluded saying he wants to use Netflix to help “set up institutions based on rule of law and a sense of principals and the dignity and worth of every individual.”

Finally, after noting there is still a “clash” in the country, Obama told the crowd what he hopes his new work will do.

“I’m putting my money on the latter way,” Obama said. “That’s what we hope to be a voice to, through Netflix and through my foundation, where we’re identifying and training the next generation of leaders here in the United States and around the world. So they can start sharing their stories and cooperating.”

Former President Barack Obama told attendees at a conference in Japan on Sunday that he is looking to shape “a million” young leaders in his image to help the human race.

“If I could do that effectively, then—you know—I would create a hundred or a thousand or a million young Barack Obamas or Michelle Obamas,” Obama told the attendees. “Or, the next group of people who could take that baton in that relay race that is human progress.”

Obama reportedly made the remarks while discussing the Obama Foundation’s efforts to help young people around the world get connected to each other via the Internet.

The former president said that today’s problems are mostly “caused by old men,” and young people such as the organizers of the anti-gun March for Our Lives rally who survived the high school shooting in Parkland, Florida, can “create change” to solve those problems.

Obama singled out the student activists in a Saturday tweet, saying he was “so inspired” by the high school students.

Obama also railed against the news and social media for making it easy for people to consume content that reinforces their opinions, and claimed that his foundation would find a way to get people to discuss issues civilly.

The former president was in Japan touting his foundation’s work after making stops in Singapore, Australia, and New Zealand.