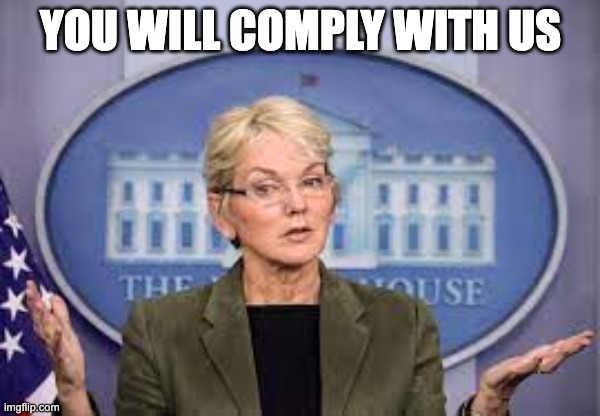 Energy Secretary Jennifer Granholm says we are witnessing one of the most significant events in human history.

She was talking about the so-called clean energy transition. But it is not a natural transition. But your government along with the Nazi’s at the UN, and NATO wants to push green energy on Americans.

I have no problem if someone wants to drive an electric car. We are supposed to be free people. But I be damn if I will allow these liars who are like wild locusts, who devour everything they touch to lecture us on what is good for humanity.

Jennifer Granholm is from Canada, and I don’t have anything against the Canadians. They have some great people in Canada. But I do have a problem with this Canadian coming to America telling us to stop drilling for oil.

How would the Canadians like if I told them to stop playing hockey? And no the oil industry is not killing the earth. We get oil out of the damn ground; how can it be so bad for the environment. But when Jennifer first came to America, she wanted to be a damn actress. She was on the Dating Game Show. It seems like she is still acting now.

You remember when she was campaigning for Obama. She says the “D” is for drive forward, and the “R” is for reverse.

She was saying in your vehicle democrats are driving forward and republicans are for reversing the country. Well, you could have fooled the hell out of me.

Now I am supposed to listen to her and a senile President lecture me on electric cars. By the way, can someone explain what we will do with those expensive electric car batteries when they go out? Because they cannot be recycled.

Electric cars burn just as much energy as gas vehicles, and they are twice as expensive. That does not even include if you need to repair them. The cheapest battery for an electric car is 2,500 dollars if you are lucky. They can run as high as 22k.

So why don’t the Climate Nazi’s allow Americans to choose if they want to drive an electric car?