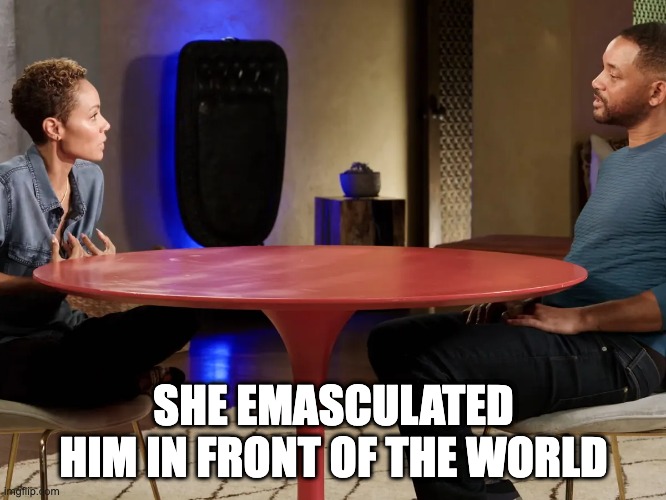 Instead of toxic masculinity, we have seen the effects of toxic femininity. This is when these domineering woman emasculate their men.

Will Smith is suffering from this. That’s why a man who was laughing at a mild joke decided to go up on stage and slap a Chris Rock.

Now there are some blacks I have heard say, that white people can not speak on this incidence because it is a family affair. Well it happened at the mostly all white Oscars.

Will Smith of Chris Rock is not part of my family, I don’t give a damn if they are Black.

A MSNBC’s Host name Tiffany Cross says that White People Don’t Fully Understand Will Smith Slapping Chris Rock. Her and some of her brain dead guest seem to think what happen is a “BlackThing”.

As if to say that Whites can not understand the nuances of a black attacking a black. I call these the “Back To Africa Nigga’s”. They want to be know as African American even if they have never been to Africa. The Africans in Africa would not even except these negro’s.

The people from Africa don’t even talk about their skin color as much as liberal whites, and black people.

But the slap was not about black and white. The slap was about Jada taken Will’s balls and hanging them up on a keychain at their home.

He did not have a problem with the joke until he looked at Jada. We have a man like Will Smith, who has allowed is wife to embarrass him by sleeping with his sons friend.

She brings this damn fool on her show to emasculate him more in front of the whole world. She could have told him I have been taken the pipe from this young guy name  August Alsina. 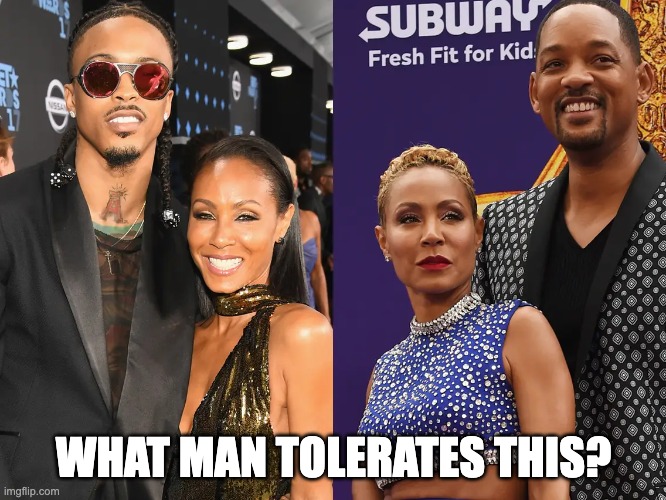 Yet she brought this cuck on her show to tell him in front of the world. And he sets there have her strip his manhood on the television. He and her even laughed about this “entanglement” while on her show. Yet Chris Rock makes a mild joke and Jada gives him the side eye.

And this damn fool does something that will never be forgotten. And it is all because he is suffering from Toxic Femininity at home. Jada has no respect for Will Smith and it shows.

Yet you have some men who are being led by these toxic domineering woman. They come on shows and tell these emasculated men what to be offended about.

I see that some of these same woke blacks where commenting on Kyle Rittenhouse. They where calling him a white supremacist even though he is white and everyone he shot was white.

So why are you in the Rittenhouse and “Whites” family business. These are the same woke blacks that say white people can not wear braids. They call it appropriation of Black culture. So if blacks wear blonde weave is that called appropriation of white culture? Or when they wear asian weave, is that appropriation of Asian culture?

If blacks go to the Oscars are they acting white since blacks were not really allowed when it began. When Hattie McDaniel won her Oscar in 1939. They placed her at a segregated table at the back of the awards show. She was not allow entry into the “whites only” after party.

But what I’m sick of is when blacks do something stupid they say that whites can not comment on their stupidity.

I believe that all races can comment on every story if it’s news. If you are a public figure, and you break the law, or do something stupid. You should expect for people to speak on your stupidity.

But I don’t want to go to far down that road, because I want to focus on this toxic femininity. These are the women that strip the men of their dignity, while saying “I’m a strong woman.” Well I got news for you. Our grandmothers, and mothers where strong. And they did not need to emasculate their men to do it.

And strong men do not need to degrade their women to look strong. A lot of the feminization of young boys and men is because these women are not happy with themselves. There is no need for a woman to act like the man of the house to be consider as a strong woman.

If the truth were told most women are the boss of the house. But some are not happy with being the boss. They have to take what God meant as good and destroy it.

Gabrielle Union and Dwyane Wade is another case of Toxic Femininity. This fool describes himself as the helpmeet for her. That’s why the son is mixed up. And that is why Will Smith and Jada Smiths kids are mixed up. 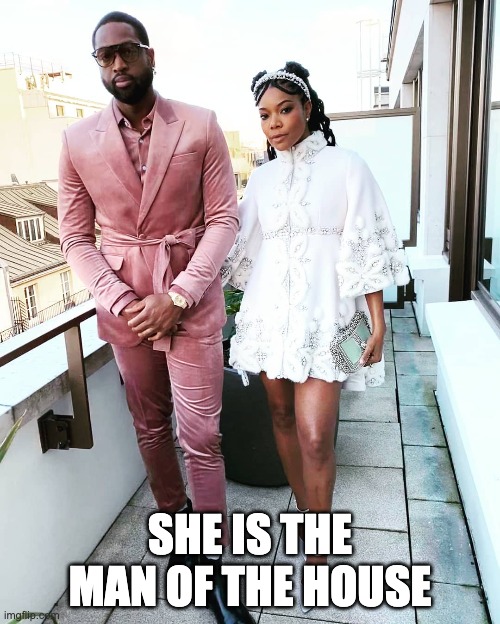 Even in movies they have the men or boys mixed up because their mothers where overbearing. Look at Norman Bates. That was one mixed up young man.

And even movies like Basic Instinct Sharon Stone was crazy and wanted to control the men she slept with. Some women do it in different ways. There are some woman that use sex to control a man. They treat him like a boy until they want him to do something that requires a man. Then they say “why don’t you man up”. Well you have been treating him like a boy for 10 or 20 years.

Don’t expect him to turn on his man switch now. Notice how most men act around their women. They act like little boys needing their mothers approval. They can’t even watch a fight, or an action movie without permission.

If they watch a ballgame they have to get what they call their “man cave.” Because she does not allow him to make noise where she can hear him. Hell in the old days the whole house was the fathers man cave.

He did not go around beating his chest talking about he has a man cave. That proves something if you feel the need to talk about having a man cave.

They have women acting like the savior on many movies now. Because it is upsetting to have women being rescued in a movie to the new gang of feminist.

I’m not saying a woman can not hunt, fish, are even hike. But she does not have to act like a man?

Will Smith slapped Chris Rock because he has to hang his testicles up on a key chain when he gets home. Jada does not allow Will to stand up when he is urinating. If she catches him standing and urinating. That means he will get handcuffed and slapped around.

So he can’t slap Jada for treating him like the cuck he is. And when she was annoyed about what Chris Rock said. She gave him a look that meant something. And I can interpret that look in the Ghetto vernacular if you would like.

That look meant. “Nigga If You Don’t Get Your Black Ass Up On The Stage And Slap This Nigga.” I will place you balls in a vice when we get home. So he marched up on that stage and embarrassed himself in front of the world.

I heard another actress say she can’t keep a man, or it’s hard for her to date. I think she once said “I think it’s very hard to be in a relationship with me.” Something on that level. Charlize Theron says that it is hard for her to keep a man. It has nothing to do with her “cleaning out her boyfriends closet while he was out of town.” I can tell her the real reason she can not keep a man. She always has a bunch of gay men hanging around, and she has mixed her adopted kids up also. 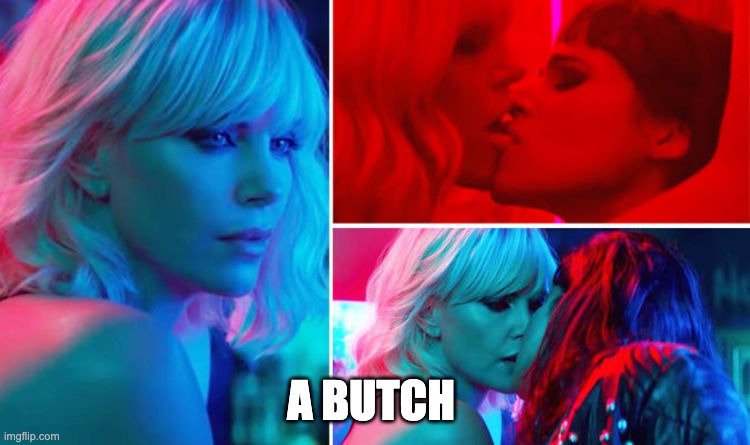 But even the movie roles she takes. I know it is acting but I’m not talking about the movie Monster. In Atomic Blonde she is a little to manly for my liking. I know she is supposed to be a killer. But there are other woman playing killers. Jessica Chastain was a killer in “Ava”. She did not act like a man. 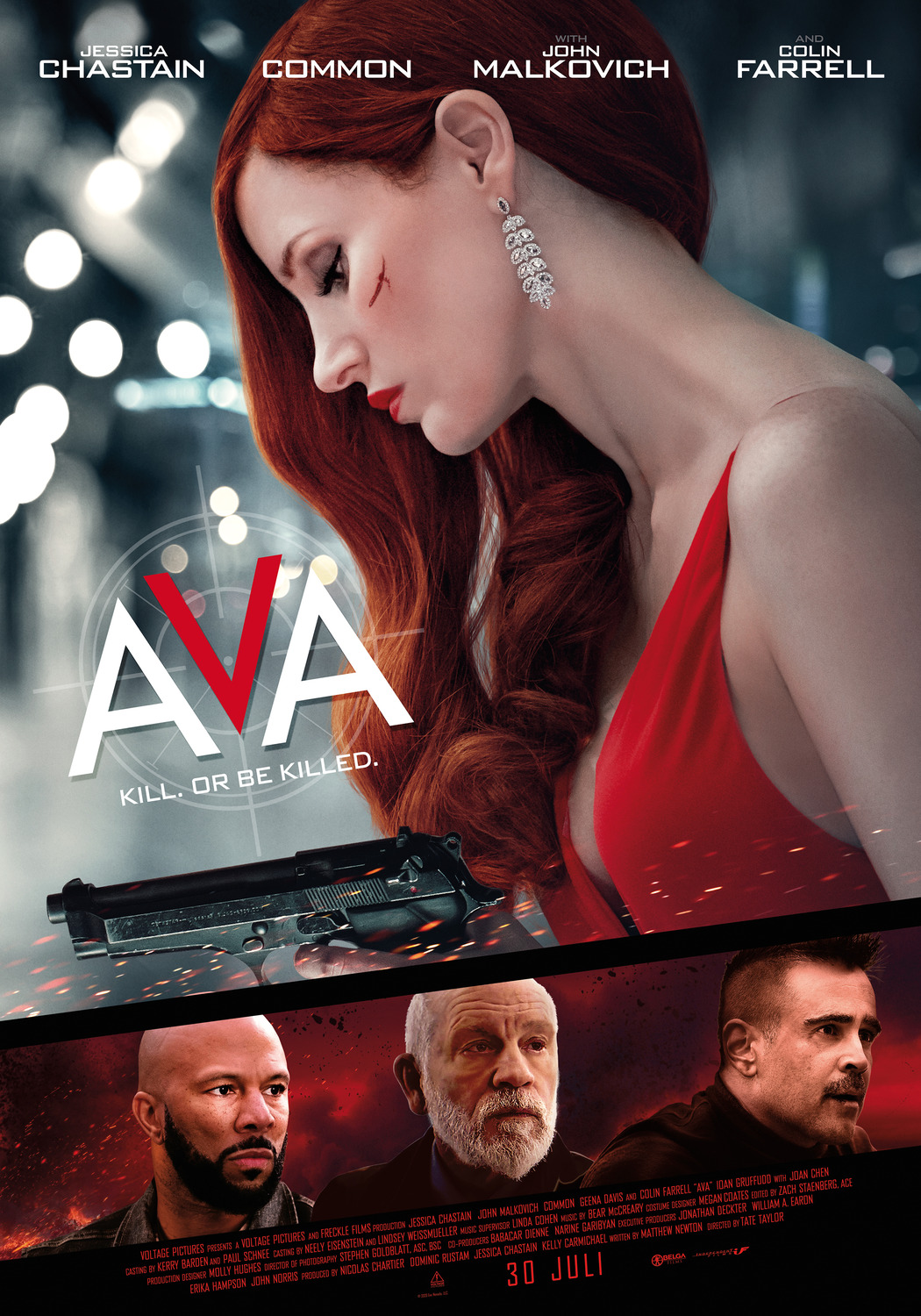 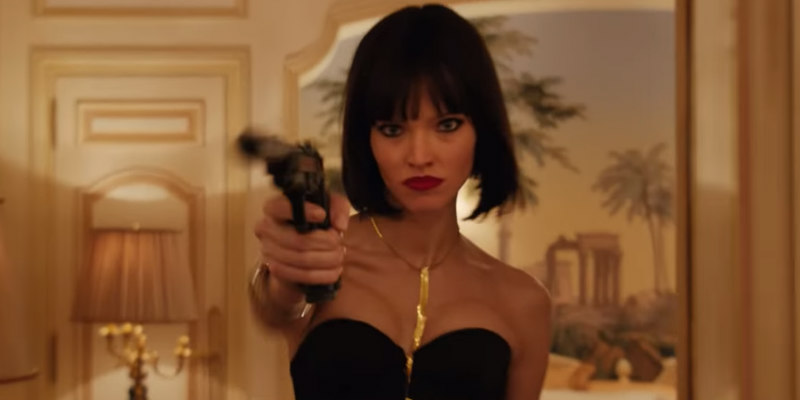 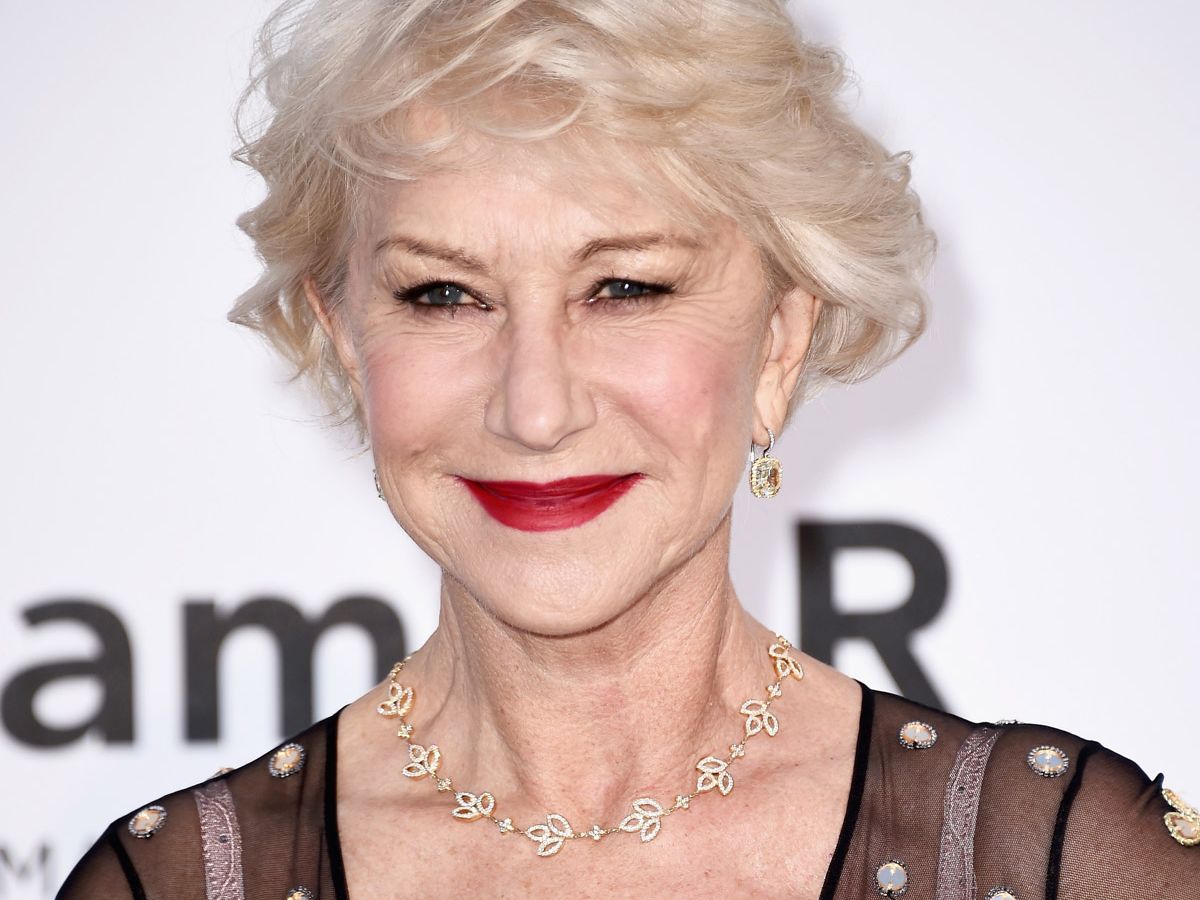 Most of the feminist that say they want equal rights really want more rights than men. Women are more prone to put family, or friends before a career. It is nothing wrong with that. It just proves men and women are different, and they will never be the same.

But there are women like Hillary Clinton. The feminist love her, but the truth is no one would have ever talked about her being president if it where not for Bill Clinton. Bill Clinton has raped woman, and sexual harassed women. Yet the feminist love Hillary who protected Bill the rapist.

And you will notice that Hillary has become more, and more butchey, as she has gotten older. It has nothing to do with her age. Some older women are more feminine as they become older. 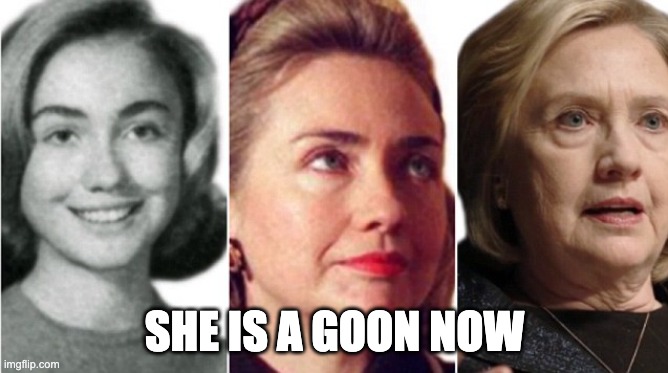 They say she curses out Bill regular. Don’t forget how she talked to the Secret Service men when Bill was president. That’s because she is suffering from toxic femininity. I wish everyone could treat each other with respect. And that does not mean I must agree with what you say.

When women degrade their husband, or man it does no good for society. Especially if they do it in front of the children. Don’t ever think it will end well when you do this. Father’s once got respect, and now we are promoting stay at home dads. There is no better way to strip a man of who he is then, asking him to stay home and play mommy.

Call it chauvinistic but we see that young men are not better under this “Toxic Femininity”. So if you want a better society, we better tone done that testosterone in the women.