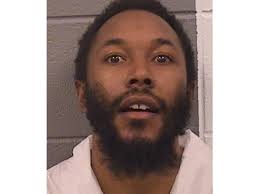 CHICAGO (CBS) — Just days after he was served with a court order barring him from coming near his father, Cook County prosecutors said  murdered the 61-year-old and mutilated the body in the basement of the older man’s West Pullman home.

He then allegedly posted several selfies on Facebook, the Chicago Sun-Times is reporting.

Led into court in shackles and white, jail-issued coveralls, the 26-year-old Edmondson muttered and ranted during a bond hearing Tuesday at the Leighton Criminal Courthouse.

When Assistant State’s Attorney Julia Ramirez said that Edmondson was facing a single count of first-degree murder, in addition to pending charges for violating the order of protection taken out by his father on Nov. 20, Edmondson shouted.

“The order of protection is gone,” he said, smiling. “He is no longer living.”

Edmondson laughed softly to himself as Ramirez described how Carl Edmondson’s body was found Saturday at the bottom of the basement stairs of his home in the 11500 block of South Bishop – the skull crushed and blood and brain matter splattered on the floor and walls.

Carlton Edmondson shook his head and seemed to chuckle when Ramirez added that Carl Edmondson’s penis had been cut off.

The outbursts prompted Judge Stephanie Miller to order Carlton Edmondson out of the courtroom even before she ruled that he be held without bond.

Carlton Edmondson answered the door when police arrived, and when asked the whereabouts of his father, said the older man was “at the hospital,” Ramirez said.

Police took Carlton Edmondson into custody, and found the body beside a Bowie knife, circular saw, and a “concrete capstone,” Ramirez said. The body smelled of gasoline, and a gas can lay nearby, Ramirez said. Inside the house, investigators found a black jacket that appeared to be the one Carlton Edmondson was wearing in pictures he posted to Facebook on Saturday.

In the photos, Carlton Edmondson holds a cigarette and grins at the camera, with what looks like blood spatter against the white logos on the jacket.

Using the odd punctuation and spelling Carlton Edmondson used for most of his posts, one photo is captioned “EyEm OAWn mA pEriOd #beebop #silenceofthelambs #gdshit #chevezwhatupfolkz.” A post from around 7 a.m. reads “EyE sIlEnCed thE LahmeDs.”

Five days earlier, Carlton Edmondson was arrested for throwing a brick through the window of his father’s house, and was released on a recognizance bond from the police station.

Court records indicate Carlton Edmondson had been arrested six times since September on a variety of misdemeanor charges, including refusing to give his name to police officers who saw him drinking on a street corner; stealing a pair of $16 sunglasses from a South Side Target and snatching a 70-year-old woman’s cell phone as she bought lottery tickets at a convenience store.

In 2015, he was arrested for flashing his penis at police officers in the Loop, and also for refusing to leave a downtown 7-Eleven store.

Carlton Edmondson’s father’s first sought an order of protection from his son in August. He subsequently made another request for the order in October.

The order of protection barred Carlton Edmondson from having contact with his father or coming to his house. The younger Edmondson was served with a copy of the order when he was arrested, Ramirez said.

“Not guilty!” Carlton Edmondson yelled. “It wasn’t me. It wasn’t his jacket.”

When Ochalla asked that Carlton Edmondson be evaluated at the jail hospital, he shouted again.