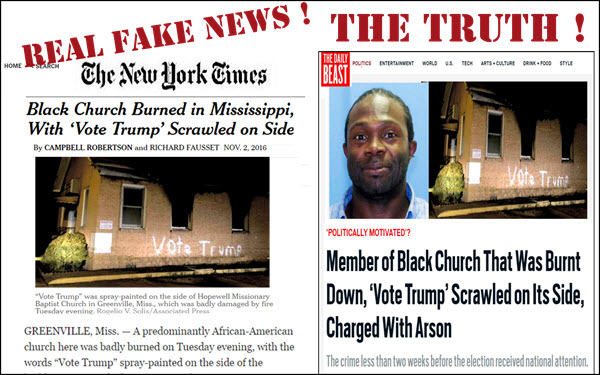 Liberal actor Jussie Smollett is accused of staging a racist and anti-gay attack on himself, which Smollett blamed on supporters of President Donald Trump.

Smollett’s alleged fake “hate crime” appears to be the latest instance of liberals manufacturing hate crimes for attention in the Trump era.

The Daily Caller News Foundation compiled below some of the most outrageous fake hate crimes since Trump was elected, in rough chronological order:

ANTI-MUSLIM HATE CRIME IN MICHIGAN TURNS OUT TO BE A HOAX (NOV. 2016)

A Muslim woman at the University of Michigan received national attention from national outlets like The Washington Post in November 2016 after she claimed a drunk 20-something man threatened to light her on fire if she didn’t remove her hijab. The university condemned the “hateful attack,” which turned out to be a hoax.

Taylor Volk, an openly bisexual senior at North Park University claimed to be the target of hateful notes and emails following Trump’s election in November 2016. Volk told NBC News that “I just want them to stop.” But the “them” referenced by Volk turned out to be herself, as the whole thing was fabricated.

Philadelphia woman Ashley Boyer claimed in November 2016 that she was harassed at a gas station by white, Trump-supporting males, one of whom pulled a weapon on her. Boyer claimed that the men “proceeded to talk about the election and how they’re glad they won’t have to deal with n—–s much longer.” Boyer deleted her post after it went viral and claimed the men had been caught and were facing criminal charges. Local police debunked her account.

WHITE MEN ROB MUSLIM WOMAN OF HER HIJAB AND WALLET — EXCEPT IT NEVER HAPPENED (NOV. 2016)

An 18-year-old Muslim woman in Louisiana claimed in November 2016 that two white men, one of whom was wearing a Trump hat, attacked and robbed her, taking her wallet and hijab while yelling racial slurs. She later admitted to the Lafayette Police Department that she made the whole thing up.

A church organist was arrested in May 2017 after he was found responsible for spray-painting a swastika, an anti-gay slur and the words “Heil Trump” on his own church in November 2016. When the story first broke, media outlets tied the hoax to Trump’s election. “The offensive graffiti at St. David’s is among numerous incidents that have occurred in the wake of Trump’s Election Day win,” The Washington Post reported at the time.

Another 18-year-old Muslim woman, this time in New York, was the subject of breathless headlines in December 2016 after she claimed to have been attacked by a group of Donald Trump supporters on a New York subway while onlookers did nothing. The woman, Yasmin Seweid, would go on to confess that she made the whole thing up. 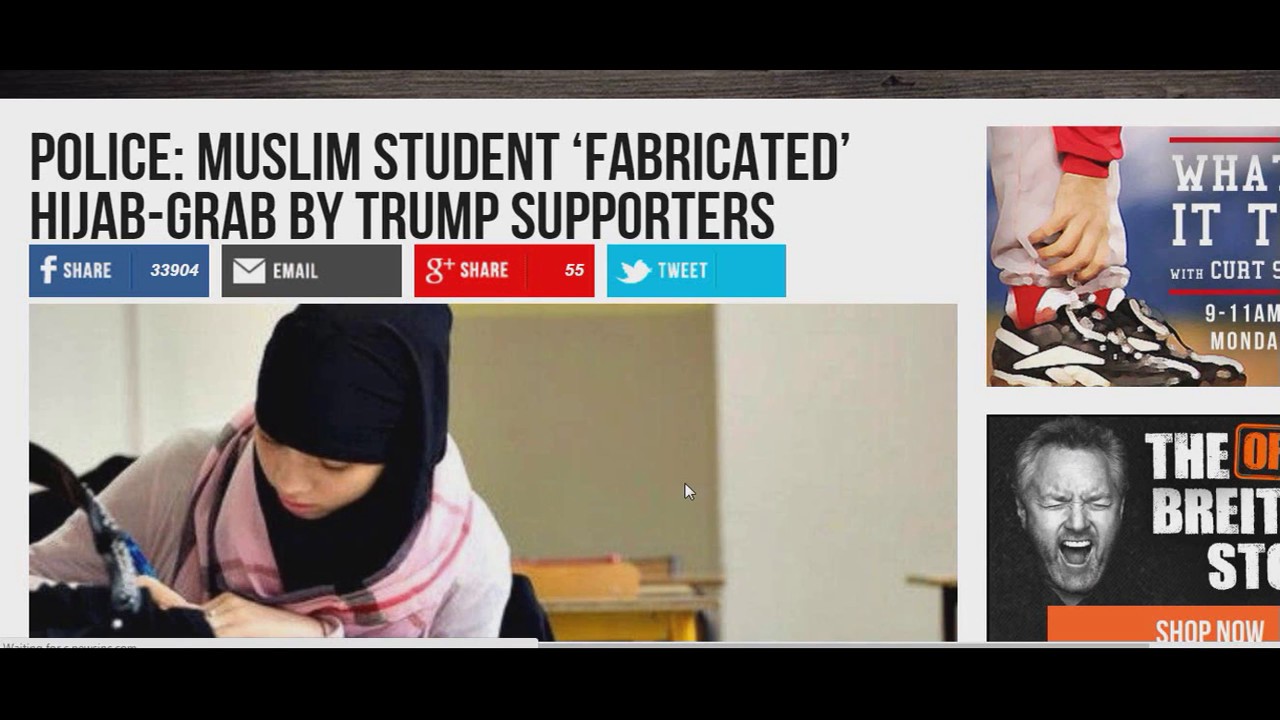 WHITE GUY SETS HIS OWN CAR ON FIRE, PAINTS RACIAL SLUR ON HIS OWN GARAGE (DEC. 2016)

Denton, Texas, resident David Williams set his own car on fire and painted “n***** lovers” on his home’s garage, in an apparent attempt to stage a hate crime. Local police investigated the arson as a hate crime. Williams and his wife, Jenny, collected more than $5,000 from Good Samaritans via a GoFundMe page before the hoax was exposed.

As tales of Trump-inspired “hate crimes” were spread far and wide by liberal journalists after Trump’s election, one online prankster decided to test just easy it was to fool journalists. The prankster sent Mic.com writer Sarah Harvard a fictitious story in which a Native American claimed to have been harassed by an alleged Trump supporter who thought she was Mexican. Despite no evidence backing up the claim, Harvard spread the fake story, emails the prankster shared with The Daily Caller showed.

STUDENT WRITES ANTI-MUSLIM GRAFFITI ON HIS OWN DOOR (FEB. 2017)

A Muslim student at Beloit College wrote anti-Muslim graffiti on his own dorm room door. The student was reportedly motivated by a desire to seek attention after a Jewish student was targeted with an anti-Semitic note.

ISRAELI MAN BEHIND ANTI-SEMITIC BOMB THREATS IN THE U.S. (APRIL 2017)

Media outlets didn’t wait to find out who was behind a string of bomb threats targeting synagogues and Jewish schools before linking the threats to Trump. A U.S.-Israeli man was charged in April 2017 and indicted in February 2018 for the threats. A former reporter for The Intercept was also charged in March 2017 with making several copycat threats.

Students at St. Olaf college in Minnesota staged protests and boycotted classes in May 2017 after racist notes targeting black students were found around campus, earning coverage in national media outlets like The Washington Post. It later came out that a black student was responsible for the racist notes. The student carried out the hoax in order to “draw attention to concerns about the campus climate,” the university announced.

The Air Force Academy was thrown into turmoil in September 2017 when horrific racist notes were found at the academy’s preparatory school. “Go home n***er,” read one of the notes. The superintendent, Lt. Gen. Jay B. Silveria, went viral with an impassioned speech addressing the racist notes. 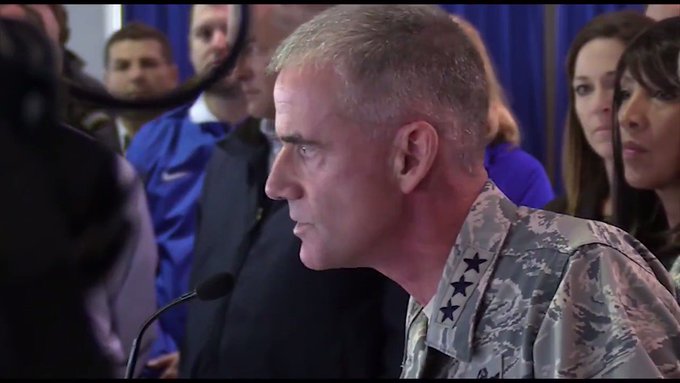 “If you can’t treat someone with dignity and respect–then you need to get out.”-Lt. Gen. Jay B. Silveria, Superintendent @AF_Academy

Two months later, authorities determined that one of the students targeted by the notes was also the person responsible for writing them.

A student at Kansas State University filed a police report in November 2017 over racist graffiti left on his car. “Go Home N***** Boy” and “Whites Only,” read the racist graffiti, which the the student later admitted to writing himself.

Another instance of racist graffiti that same month also turned out to be a hoax. A Missouri high school investigated after racial slurs were left on a bathroom mirror in November 2017, only to find that the student responsible was “non-white.”

Texas waiter Khalil Cavil went viral after posting a Facebook picture of a racist note that he claimed a customer had left on the receipt, in lieu of a tip. The note described Cavil as a “terrorist.” Saltgrass Steak House, where Cavil worked, initially banned the customers for life, before their investigation revealed that the waiter had faked the racist note. “I did write it,” Cavil later admitted. “I don’t have an explanation. I made a mistake. There is no excuse for what I did.”

A Texas waitress apologized in July 2018 after blaming local law enforcement for an offensive note targeting Mexicans. She later admitted to writing the note herself.

A New York woman was charged in September 2018 after police determined she fabricated a story about white teens yelling racial slurs at her and leaving a racist note on her car.

Several racist notes at Drake University were actually the work of one of the students who had been targeted by them. “The fact that the actions of the student who has admitted guilt were propelled by motives other than hate does not minimize the worry and emotional harm they caused, but should temper fears,” university president Marty Martin said afterwards.

National media outlets pounced on a selectively edited video from the March for Life that showed Native American activist Nathan Phillips beating a drum in front of a boisterous group of boys from Covington Catholic High School. 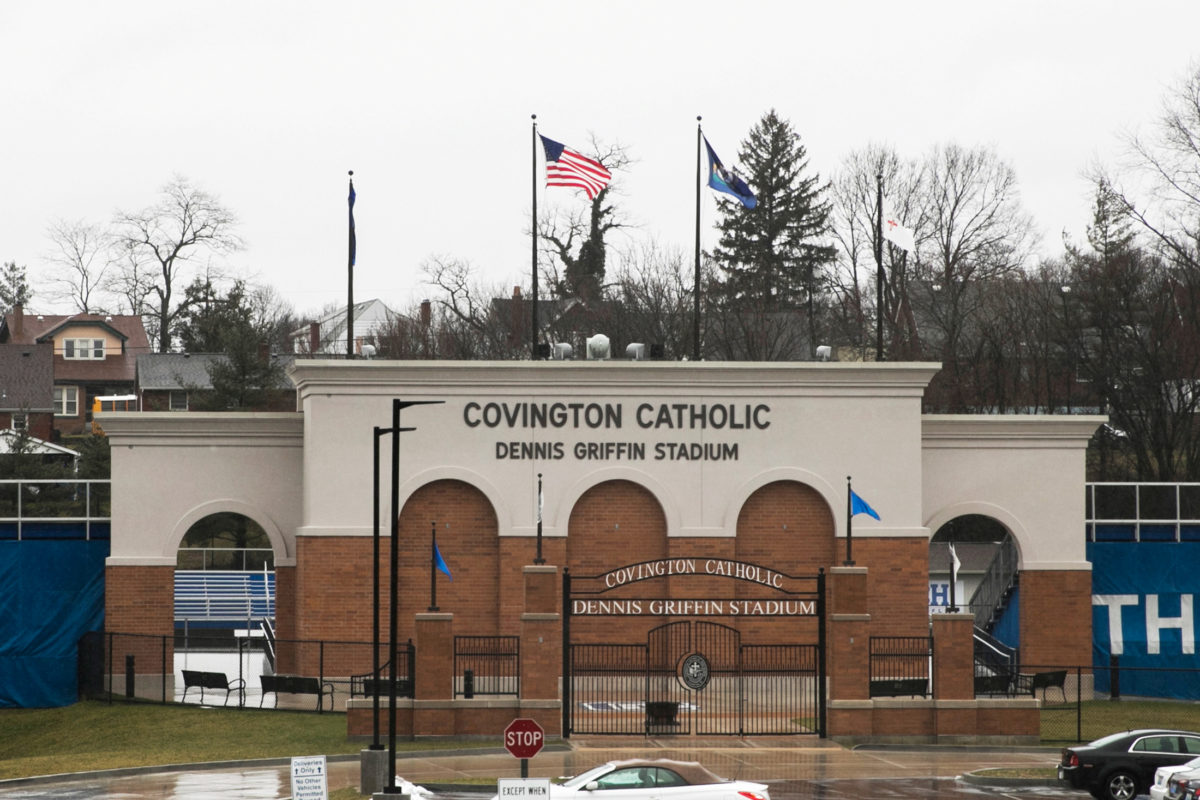 Phillips originally told The Washington Post the students swarmed him while he was preparing to leave the Indigenous People’s March scheduled for the same day. Phillips originally said one student, who later identified himself as high school junior Nick Sandmann, blocked his path from leaving as he tried to do so. The extended video shows that wasn’t the case: Phillips approached the high school boys during their cheers, not the other way around. Some of the people with Phillips were directing racially charged language at the students, not the other way around.

Phillips told a second variation of his story to the Detroit Free Press. Phillips claimed he was playing the role of peacemaker by getting between the students and four “old black individuals,” whom he claimed the students were attacking. “They were in the process of attacking these four black individuals,” Phillip tolds the Michigan paper. “I was there and I was witnessing all of this … As this kept on going on and escalating, it just got to a point where you do something or you walk away, you know? You see something that is wrong and you’re faced with that choice of right or wrong.”

“These young men were beastly and these old black individuals was their prey, and I stood in between them and so they needed their pounds of flesh and they were looking at me for that,” he added. Extended video shows that account also isn’t accurate. The four individuals Phillips referenced were members of the Black Hebrew Israelites and they launched racist and anti-gay slurs at the high school students, not the other way around. (RELATED: Nathan Phillips Keeps Changing His Story, Keeps Getting It Wrong)

Anti-Semitic vandalism in New York City turned out to be the work of a Democratic activist, according to police. It wasn’t a hoax — the anti-Semitic vandalism was real — but the suspect wasn’t the right-winger some had assumed him to be. The man police arrested, based on surveillance footage, was 26-year-old James Polite, who had actually interned for City Hall on anti-hate issues.

This hoax occurred one week before Trump was elected, but TheDCNF is including it as a bonus because it was so egregious. Leftist media outlets ran headlines like “A Black Church Burned in the Name of Trump” after a black church in Greenville, Mississippi, was set on fire and spray painted with the words “Vote Trump.” The Washington Post’s original coverage of the incident read in part,” Greenville Mayor Errick Simmons called the fire a ‘hateful and cowardly act,’ sparked by the incendiary rhetoric of GOP nominee Donald Trump during his presidential campaign.” But the church was set on fire by one of the church’s own congregants, who is black.