The Chicago Police Department on Monday released hours of video captured as part of their investigation into the alleged hate hoax orchestrated by former Empire actor Jussie Smollet earlier this years.

Included in the nearly 70 hours of video is footage of Smollett wearing the noose he alleged his so-called attackers looped around his neck during the racist and anti-gay assault against him. The disgraced entertainer can also be seen asking officers to shut off their body cameras after they enter his downtown Chicago apartment. The below video shows three officers walking into a room with Smollett, whose face is blurred out. One officer asks Jussie Smollett if he wishes to remove the noose and the actor does so.

Chicago police released the video days after a judge decided to appoint a special prosecutor to investigate the decision by Cook County prosecutors to dismiss all charges Smollett. He was charged with lying to police regarding the incident. Prosecutors dropped the charges on March 26.

Smollett said two masked men on January 29th shouted racial and anti-gay slurs, poured bleach on him, beat him and looped a rope around his neck. He claimed they shouted, “This is MAGA country” — a reference to President Donald Trump’s “Make America Great Again” campaign slogan. He asserted that he could see one of the men was white because he could see the skin around his eyes. Police said Smollett hired two men, brothers Abimbola “Abel” and Olabinjo “Ola” Osundairo, both of whom are black, to attack him. Smollett allegedly paid the men $3,500.

In a Friday ruling that leaves open the possibility that Smollett could be charged again, Cook County Judge Michael Toomin suggested that the county’s state’s attorney, Kim Foxx, mishandled the Smollett case by appointing a top aide to oversee it after she recused herself.

Foxx had been in contact with a relative of the actor and had been approached by former first lady Michelle Obama’s one-time chief of staff on behalf of Smollett’s family, and she explained at the time that she was recusing herself to avoid “even the perception of a conflict” of interest.

In his ruling, Toomin said he had no problem with Foxx’s February recusal, but that it should have included a request for a special prosecutor to take over the case. He said she had no right to hand it off to someone from her office, which he said amounted to naming her own special prosecutor.

Fox Entertainment announced in April that Smollett would not appear in season six of Empire, which is its last season. 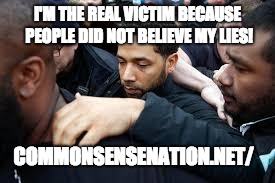 After admitting on MSNBC that Smollett has done “tremendous damage” because the right-wing is now saying that “victim narratives” are “rampant and not true,” Stafford, the editor-in-chief of the LGBT publication, suggested that police officers conducted their investigation in way that would harm Smollett.

Stafford said LGBT figures who initially supported Smollett, who has been accused of paying two Nigerian-American brothers to attack him, are “sprinting” about what to do next and “really frantic” behind the scenes, wondering, “how do we correct this message?”

Stafford then suggested that the Chicago Police Department leaked information to make Smollett look bad because they support Trump, conveniently ignoring the fact that it was Smollett who called the police in the first place to report what officers are now saying was a staged attack.

Smollett reportedly told officers that his “attackers” yelled “this is MAGA country” in near sub-zero temperatures while also shouting racist and homophobic slurs. Smollett also took officers to the scene of the “crime” and pointed to a surveillance camera, thinking that the “attack” had been recored. Smollett revealed that it was “disappointing” when the detective told him “that the camera inside of the casing was facing north, so they didn’t have it.”

Yet, Stafford suggested that the Chicago Police Department knew Smollett was lying and called “it a racist and homophobic attack” on “day one” to “use it against” Smollett at the end of the investigation.

“Personally, it was incredibly shocking on day one to see the police department call it a racist and homophobic attack. Their first statement—they exclusively said that, said they’re investigating it as a victim case,” Stafford said on MSNBC. “As someone that has been investigating these for years in Chicago, that was really unprecedented before… And a lot of the time people in the background were worried they were leaning into this victim part of the story because they didn’t believe him and they wanted to use it against him at the end when they were able to prove that he was lying.”

Stafford claimed that “historically, the Chicago police has not leaked information, or information like this hasn’t leaked so quickly and so rapidly in a case.”

“The police were openly confirming and not confirming certain reports and not doing it to other parts of the story, and so due to the vocal nature in this case, it was really peculiar,” Stafford said. “And people have a lot of reason to not trust them… Chicago has a deep history of openly lying to citizens. This police department did in 2016, openly through their union, support Donald Trump.”

He said that much of the case has been focused on the “MAGA statements, and the far-right has really clung to them.” Stafford said that is why he is questioning the police department’s conduct.

“Many people have felt that they have been so willing to call this a hoax… is because the central question of this case was, ‘Are Donald Trump supporters out here committing hate crimes?’ And that’s what really sparked a lot of the tension,” Stafford continued. “To have a police department that hasn’t been as cooperative as they have been this round, do not openly give information, do openly lie and mishold information in cases and then to know that they… have openly supported Donald Trump in the 2016 election, a lot of activists on the ground are saying, ‘Wait, what’s going on here? Who do we believe out of these two suspect people.’”

Stafford twisted himself into pretzels trying to rationalize and make excuses for Smollett’s actions, even saying at one point that “Jussie may have created this whole situation to highlight a reality that is happening every day”—“our current administration doesn’t support people like him — that are black and queer.”

Jussie Smollett‘s siblings are standing by their brother amid claims that the “Empire” star orchestrated an alleged hate attack against himself.

Smollett’s brother, Jocqui, posted an Instagram photo that read, “This is the media, an irresponsible media. It will make the criminal look like he’s the victim and make the victim look like he’s the criminal. If you aren’t careful, the media will have you hating the people who are being oppressed and loving the people who are doing the oppressing.”