The report released new messages from an FBI agent who was one of four case officers handling the “day-to-day” activities of the investigation, and  one of two FBI agents who interviewed Clinton.

In one exchange in February 2016, the FBI agent, identified only as “Agent 1,” talked to another FBI employee about interviewing Hillary Clinton’s personal IT staffer. The FBI employee asked how the interview went.

He continued: “Went from never inside the scif [sensitive compartmented information facility] at [Clinton’s residence], to looked in when it was being constructed, to remove the trash twice, to troubleshot the secure fax with HRC a couple times, to everytime there was a secure fax i did it with HRC. Ridic,”

Lying to investigators is a federal crime, one that former National Security Adviser Michael Flynn is being charged with, as well as former Trump campaign adviser George Papadopoulos. However, the FBI employee joked it “would be funny” if the guy was charged.

The FBI employee replied: “would be funny if he was the only guy charged n this deal.”

Agent 1 responded that even though he lied, “aint noone gonna do s–t.”

He wrote: “I know. For 1001. Even if he said the truth and didnt have a clearance when handling the secure fax — aint noone gonna do s–t”

The report revealed other exchanges that revealed Agent 1’s belief that the outcome of the probe was cooked, in text messages he sent to a fellow FBI agent on the case with whom he was also involved in a relationship.

He advocated against even interviewing Clinton. “We have nothing—shouldn’t even be interviewing”

He also messaged: “My god … I’m actually starting to have embarrassment sprinkled on my disappointment. … Ever been forced to do something you adamantly opposed.”

In a later message, he wrote: “done interviewing the president” in reference to Clinton.

Agent 5 sent a message to him on February 9, 2016, complaining about the investigative work she was being given. He wrote her back:

“Yeah, I hear you. You guys have a shitty task, in a shitty environment. To look for something conjured in a place where you cant find it, for a case that doesnt matter and is predestined.”

He also called the investigation “the most meaningless thing I’ve ever done,” a “continued waste of resources and time and focus.”

“Its just so obvious how pointless this exercise is …” he wrote.

He later told inspector general investigators that he was “embarrassed” his messages were read and denied it affected his actions in the investigation.

“You know, guys, I just, I think this was primarily used as a personal conversation venting mode for me. I’m embarrassed for it,” he said. 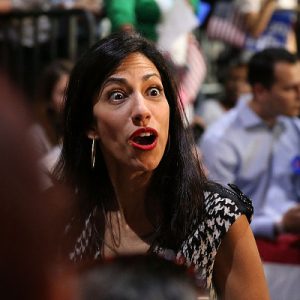 Top Hillary Clinton confidante Huma Abedin played no formal role in a radical Muslim journal — even though she was listed as an editor on the hate-filled periodical’s masthead for a dozen years, a campaign rep claimed Sunday.

“My understanding is that her name was simply listed on the masthead in that period,” Clinton spokesman Nick Merrill said hours after The Post broke the bombshell story. “She did not play a role in editing at the publication.”

Merrill said Abedin was just a figurehead and not actually on staff at the Saudi-based and -funded Journal of Minority Muslim Affairs, which featured radically anti-feminist views and backed strict Islamic laws roundly criticized for oppressing women.

A journalism major at George Washington University, Abedin, 40, was listed as “assistant editor” of the journal from 1996 to 2008, when her name was removed from the staff box and she went to work for Clinton at the State Department.

Her brother, who was an associate editor, and a sister, also employed as an assistant editor, are listed as staff members.

He also declined to say whether Clinton, who has made championing women’s rights a centerpiece of her campaign, was aware of her longtime aide’s position at the publication or its extremist views.

The pair have been close since 1996, when Abedin — often described as Clinton’s “second daughter” — was a White House intern assigned to the then-first lady.

Since then, she has worked for Clinton on her Senate campaigns and at the Clinton Foundation and is now the vice chairwoman of her presidential bid.

The journal supported a strict interpretation of Islamic Sharia laws, which call for beheadings, require women to cover their bodies and faces and advocate death for “infidels” — which in their view includes just about everyone but the most extreme religious hardliners.

The publication also blamed the US for the 9/11 terror attacks, which were carried out largely by Saudi nationals.

Typical fare in the publication includes a 1996 piece titled “Women’s Rights Are Islamic Rights,” which argues that single moms, working moms and gay couples with children should not be recognized as families.

It also maintained that revealing dress “directly translates into unwanted results of sexual promiscuity and irresponsibility and indirectly promote violence against women.”

In another 1996 article, Abedin’s mother wrote that Clinton was advancing a “very aggressive and radically feminist” agenda that was un-Islamic because it focused on empowering women.

“‘Empowerment’ of women does more harm than benefit the cause of women or their relations with men,” Saleha Mahmood Abedin wrote.