The invite was leaked to Politico:

New: Pence called Flake today to personally invite him and other bipartisan immigration negotiators to the White House to meet with Trump next week

The invite to amnesty-advocate Flake came just as his group of pro-amnesty establishment Senators split over Democrats’ refusal to accept any of President Trump’s popular immigration reform measures. Those measures include easier deportation rules, a border wall and an end to chain-migration and the visa-lottery.

The establishment group, which include Flake, split when Sen. Thom Tillis and Sen. James Lankford exited on Thursday, saying:

Over the course of the last several weeks, we have negotiated in good faith with Senate Democrats on a DACA agreement. Unfortunately, our discussions on border security and enforcement with Democrats are much further apart, and that is key to getting a bipartisan deal on DACA. Until that happens, we cannot accomplish the solutions our country needs and many families deserve. More work remains ahead.

Before Tillis quit, he told reporters at the White House in the morning that administration officials would offer a revised list of Trump priorities to the establishment group in a White House meeting next week. According to a report in Roll Call:

Lawmakers and the administration had settled on a general framework and the plan would be shared with Democrats as early as Tuesday.

“We are all going to have an opportunity to get in a room next week and everybody’s going to see the single version,” Tillis told reporters at the Capitol.

The news that Pence invited Flake and the other leaders came after Tillis’ prediction of a meeting next week.

The group split after Trump used a White House meeting on Thursday morning to show that he would not be pushed away from his election-winning immigration agenda, despite pleading by Graham, Tillis, and Lankford.

Thank you to the great Republican Senators who showed up to our mtg on immigration reform. We must BUILD THE WALL, stop illegal immigration, end chain migration & cancel the visa lottery. The current system is unsafe & unfair to the great people of our country – time for change!

Trump laid out his agenda on the campaign trail and formalized it in October with a long list of popular immigration principles. Since the list was published, Democrats have tried to get whittle it down by asking for updates and clarifications.

Before being picked for Vice President, Pence served in the House of Representatives with Flake, and the two became close friends. Once elected to the Senate, Flake embraced the amnesty cause and became a charter member of the disastrous 2013 “Gang of Eight” amnesty group. Led by Democratic Sen. Chuck Schumer, the gang’s amnesty bill helped the Democrats lose nine seats in the 2014 midterm elections, and allowed Trump to win the 2016 primary race.

But the Pence-Flake alliance was cracked by Flake’s steady opposition to Trump, according to an engaging article in Politico:

The old allies aren’t exactly estranged. Pence gave Flake’s son a tour of the West Wing at the White House Christmas party, and back in June, Flake snapped a photo on his iPhone as their wives reunited at the White House picnic. But it’s nothing like their heyday in the House, when one man could always be found at the other’s side. “I think that would be tough for him to explain to the president,” Flake says, grinning, “‘I was out with Flake last night.’” Whatever personal affection may have been lost, a political bond endures. At their November dinner, as the vice president pressed the senator for his vote [on the tax bill], Flake made an offer: In exchange for backing the GOP tax bill, he wanted a promise that the White House would “enact fair and permanent protections for DACA recipients.” Pence made the commitment [for an amnesty] then and there. Flake, in turn, voted to secure the administration’s first major legislative victory.

This fleeting alliance aside, in the age of Trump, a pair of conjoined political twins has been separated: Flake heading home, his star now dimmed, and Pence preparing for the possibility of succeeding Trump atop the Republican Party, be it in 2024, 2020 or, potentially, even sooner.

Pence’s record shows that he would do much more than support than a mere amnesty. In 2006, Pence used a Wall Street Journal article to tout very different legislation which would allow employers to hire an unlimited number of cheap and temporary foreign workers instead of middle-class American voters. He wrote:

Private worker-placement agencies — “Ellis Island Centers” — would be licensed by the federal government to match guest workers with jobs that employers cannot fill with American workers. These agencies will match guest workers with jobs, perform health screening, fingerprint them, and convey the appropriate information to the FBI and Homeland Security so that a background check can be performed. Once this is done, the guest worker would be provided with a visa issued by the State Department. The whole process will take a matter of one week, or less …

In contrast, real-estate entrepreneur Trump won the 2016 election with a popular pro-employee agenda, which is now helping Americans win higher salaries because companies can’t easily import foreign replacements across the line at the United States-Mexican border.

In the Thursday White House meeting with Trump, Pence declined to support Trump’s plan to change the law so that immigration rules help Americans, and he instead touted a quick amnesty for ‘DACA’ illegals:

But you’ve also said along the way we’re going to do it with a big heart.  And you’ve opened the door to an agreement on DACA, and today is part of an ongoing discussion with these Republican leaders but also with Democrats on Capitol Hill to accomplish that.  And I look forward to being a part of it.

However, the exit of Tillis and Lankford from the “ongoing discussion” will make it harder for Pence “to being a part of it.” Before the group split Thursday afternoon, Pence Tweeted: 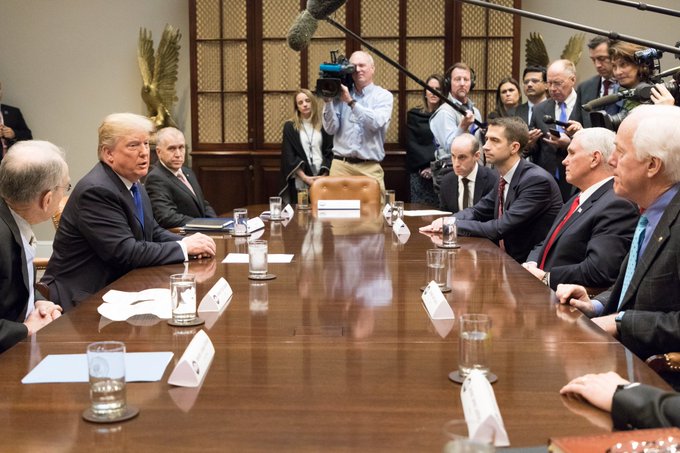 Alyssa Farah, a spokeswoman for the Vice President, dismissed Breitbart’s questions about Pence’s commitment to Trump’s high-wages policy. “Of course the VICE PRESIDENT supports the President’s agenda– it’s their shared agenda that they work on together day in and day out,” she said in an E-mail.

Your story yesterday is false. The VP doesn’t invite any individuals to meetings unless its at the President’s direction.

Trump’s aggressive reiteration of his pro-American policies during the meeting was a shocking turnabout for pro-amnesty GOP Senators, who had hoped to persuade Trump to make amnesty concessions to Democrats, partly by backing industry claims that Trump faces a staged January 19 deadline for a deal.

Cornyn says Judiciary R’s meeting w Trump tmrw on DACA.
“As soon as the president will tell us ‘OK this is something I can support’ then that gives us I think a lot of room to go talk to Democrats and say ‘OK this is what our parameters are.’”

Trump’s priorities are very popular with voters and can help GOP candidates overcome the expected wave of angry Democratic voters in November 2018.

The poll for NumbersUSA is another reminder to politicians that the business-funded ‘Nation of Immigrants” polls distract attention from voters’ private views, which were shockingly displayed on the evening of November 8, 2016.

Business groups and Democrats tout the misleading, industry-funded “Nation of Immigrants” polls because they which pressure Americans to say they welcome migrants, including the roughly 700,000 ‘DACA’ illegals and the roughly 3 million ‘dreamer’ illegals.

The alternative “priority” or “fairness” polls — plus the 2016 election — show that voters in the polling booths put a much higher priority on helping their families, neighbors, and fellow nationals get decent jobs in a high-tech, high-immigration, low-wage economy.

Four million Americans turn 18 each year and begin looking for good jobs in the free market.

But the federal government inflates the supply of new labor by annually accepting more than 1 million new legal immigrants, by providing work-permits to roughly 3 million resident foreigners, and by doing little to block the employment of roughly 8 million illegal immigrants.

This Washington-imposed economic policy of mass-immigration floods the market with foreign labor, spikes profits and Wall Street values by cutting salaries for manual and skilled labor offered by blue-collar and white-collar employees. It also drives up real estate prices, widens wealth-gaps, reduces high-tech investment, increases state and local tax burdens, hurts kids’ schools and college education, pushes Americans away from high-tech careers, and sidelines at least 5 million marginalized Americans and their families, including many who are now struggling with opioid addictions.

The cheap-labor policy has also reduced investment and job creation in many interior states because the coastal cities have a surplus of imported labor. For example, almost 27 percent of zip codes in Missouri had fewer jobs or businesses in 2015 than in 2000, according to a new report by the Economic Innovation Group. In Kansas, almost 29 percent of zip codes had fewer jobs and businesses in 2015 compared to 2000, which was a two-decade period of massive cheap-labor immigration.

Because of the successful cheap-labor strategy, wages for men have remained flat since 1973, and a large percentage of the nation’s annual income has shifted to investors and away from employees.