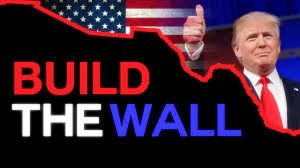 President Donald Trump on Wednesday started to reshape US immigration enforcement policies via executive action, taking his first steps toward fulfilling some of the most contentious pledges that defined his campaign — building a border wall and punishing “sanctuary cities.”

Trump signed executive orders ordering the construction of a wall on the US-Mexico border, boosting border patrol forces and increasing the number of immigration enforcement officers who carry out deportations.

“Beginning today, the United States of America gets back control of its borders,” Trump told employees of the Department of Homeland Security at the department’s headquarters in Washington.

But while Trump directed the “immediate construction of a physical wall on the southern border,” the executive orders do not cover the cost of the wall. Trump has repeatedly said that Mexico will reimburse US taxpayers for the construction costs.

Wednesday’s executive orders also seek to end sanctuary cities by stripping grant funding for those cities and ends the practice of releasing undocumented immigrants detained by federal officials before trial.

The president’s moves sent alarm bells ringing in immigrant activist circles, where questions had continued to swirl about whether Trump would truly implement many of the hard-line immigration policies he articulated during his campaign.

Trump also indicated he does not need Congress to pass new legislation to implement the border control and immigration reform agenda he outlined during his campaign for president.

“We do not need new laws. We will work within the existing system and framework,” Trump said soon after he signed the two executive orders focused on border security and immigration enforcement.

The executive orders Trump signed Wednesday call for boosting the ranks of Border Patrol forces by an additional 5,000 agents as well as for 10,000 new Immigration and Customs Enforcement officers to carry out deportations. The orders noted that the increases were subject to Congress’s appropriation of sufficient funds.

Construction of the wall could begin in months, but planning for the massive project is “starting immediately,” Trump said Wednesday in an interview with ABC News.

Trump confirmed his plans to build the wall with federal funds and then seek reimbursement from Mexico, an idea Mexico has rejected. But negotiations, he said, would begin “relatively soon.”

“I’m telling you there will be a payment. It will be in a form, perhaps a complicated form,” Trump said.

Trump also for the first time appeared to articulate on Wednesday the argument he might make to Mexican officials as he looks to compel them to pay for the wall.

Trump stressed Wednesday that the wall would “help Mexico” by deterring illegal immigration from countries further South through Mexico.

“We are going to stabilize on both sides of the border and we also understand that a strong and healthy economy in Mexcio is very good for the United States,” Trump said.

Trump’s actions leave little doubt about whether his immigration policies as president would differ from his campaign rhetoric.

There remained little question, for example, about whether Trump would push to increase deportations of undocumented immigrants. One of Trump’s executive actions was expected to call for tripling “enforcement and removal operations/agents” of the Immigration and Customs Enforcement agency, which is charged with arresting and deporting undocumented immigrants living in the US. The order also calls for an 5,000-person increase in Customs and Border Protection personnel.

“Trump is taking a wrecking ball to our immigration system. It shouldn’t come as a surpise that chaos and destruction will be the outcome,” Hincapié said, adding that her organization has already drafted legal papers to challenge Trump’s moves.

And Greisa Martinez, advocacy director at the United We Dream Network, argued that Trump’s moves “lay the groundwork for mass deportation.”

Trump’s executive orders on Wednesday did not address those of his predecessor, former President Barack Obama, that signed safeguarding undocumented immigrants who came to the US as children or who are parents of lawful US residents from deportation, which Trump during his campaign signaled he would repeal.

Spicer has said Trump wants to prioritize the removal of undocumented immigrants who have committed crimes in the US, but has refused to say whether deportation priorities would change. Trump during his campaign called for the deportation of all undocumented immigrants living in the US, though he signaled the “good ones” could return to the US under an expedited process.

Trump’s hardline immigration rhetoric and policy proposals during the campaign often put him at odds not only with Democrats but with many in his own party who called his proposal to build a wall on the US-Mexico border unnecessary and his calls for mass deportation cruel.

Trump persevered in his hardline rhetoric throughout the campaign, resisting efforts to pivot to a more moderate stance on the issue in the general election despite calls to soften his rhetoric.

Trump catapulted his campaign into controversy and relevance with his announcement speech in June 2015, in which he pledged some of the hardline immigration policies he was set to enact and decried undocumented immigrants as criminals and “rapists.” Trump never apologized for those comments.