Republican Florida Sen. Marco Rubio is warning that the fate of his state’s governorship could hang in the hands of Florida’s Broward County Supervisor of Elections Brenda Snipes, whom he’s called incompetent for violating state and federal laws. A liberal candidate similarly painted her as incompetent and corrupt.

Democratic gubernatorial candidate Andrew Gillum initially conceded the Florida race to Republican Ron DeSantis, but backtracked after vote totals changed Thursday, narrowing the gap to less than half a percent in both the gubernatorial and senatorial races. Broward County is often the slowest of the state’s 67 counties to count votes, and its election department has repeatedly been faulted for wrongdoing.

Now, Perkins Coie lawyer Marc Elias has been enlisted in a recount effort. Democratic Sen. Bill Nelson is retaining Elias, who said it’s “not plausible” that, as Broward statistics suggest, 14,000 people voted in sometimes-obscure state-level races but left the Senate one blank.

Republican Gov. Rick Scott, who, by initial appearances, beat Nelson in a race for Senate, said Elias will use aggressive techniques to “steal” the election.

Elias worked for both the Hillary Clinton campaign and the DNC during the 2016 election, even before the 2016 presidential candidate became the Democratic nominee, when the two were supposed to be independent. Perkins Coie also hired Fusion GPS during that election to investigate then-candidate Donald Trump, which ultimately resulted in an unverified dossier being sent to the FBI.

“Democrat lawyers are descending on Florida,” Rubio tweeted Thursday. “They have been very clear they aren’t here to make sure every vote is counted. They are here to change the results of election; & Broward is where they plan to do it.”

#Broward elections department has a history of violating the law:

A court found they improperly handled votes by mail:https://www.politico.com/states/florida/story/2018/08/13/judge-sides-with-florida-gop-in-absentee-ballot-dispute-with-broward-county-555553 …

Court found they destroyed ballots in 2016 in violation of state & federal law:https://www.politico.com/states/florida/story/2018/05/14/florida-to-monitor-broward-election-chief-after-judge-finds-unlawful-ballot-destruction-in-wasserman-schultz-race-415832 … #Sayfie

Now democrat lawyers are descending on #Florida. They have been very clear they aren’t here to make sure every vote is counted.

– They are here to change the results of election; &
– #Broward is where they plan to do it.#Sayfie

14.1K people are talking about this

“Bay County was hit by a Cat 4 Hurricane just 4 weeks ago, yet managed to count votes & submit timely results,” the Florida Republican continued. “Yet over 41 hours after polls closed Broward elections office is still counting votes?”

Rubio also pointed out that Snipes “doesn’t know how many ballots are left to be counted” and that she isn’t regularly reporting results, which are “chipping away at GOP leads.”

#Broward supervisor:
– says she doesn’t know how many ballots are left to be counted; &
– Isn’t reporting hourly or regularly,but rather releasing thousands of additional votes,often in the overnight hours,that are chipping away at GOP leads

5,171 people are talking about this

It’s now close to 43 hours since the polls closed and Brenda Snipes STILL doesn’t know how many votes are left to count! The results in my race are IMPOSSIBLE to believe. WATCH her explain in video below!

Say Brenda, have you tried like, maybe, like, CALLING all the workers? “We have not been able to determine (the ballot problems) yet because we haven’t talked to all the workers.” https://miami.cbslocal.com/video/category/news-politics/3973972-broward-still-counting-ballots/?fbclid=IwAR1_XS6_jIjQcw1y5mOR0fbVE6fduleiwDM1b9cqn9UsHXocWJG61Iz5BaY … 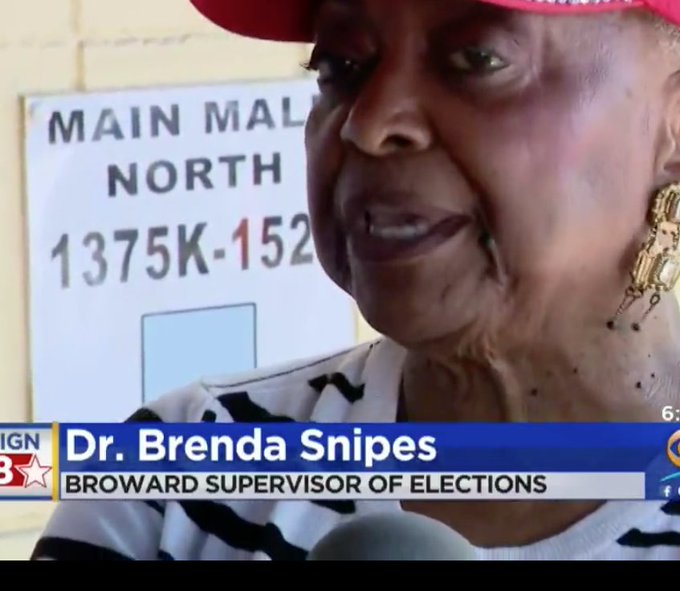 428 people are talking about this

A judge found in August that Snipes improperly handled mail-in ballots, and ordered her not to open mail-in ballots in secret after the Republican Party complained. Snipes’s defense rested on a claim that she didn’t know what the word “canvassing” meant, even though she is on the county’s Canvassing Board.

In May, a judge found that Snipes’s office broke the law by destroying ballots in the 2016 race between Wasserman Schultz and Canova.

Canova told The Daily Caller News Foundation that in that case, “they claimed to not know the difference between a federal and state investigation. They claim to be incompetent, but my impression is it’s partly a ruse.”

Polling and early-voting results showed him performing well in 2016, then the reported results rapidly shifted to favor Wasserman Schultz, leading him to suspect manipulation. 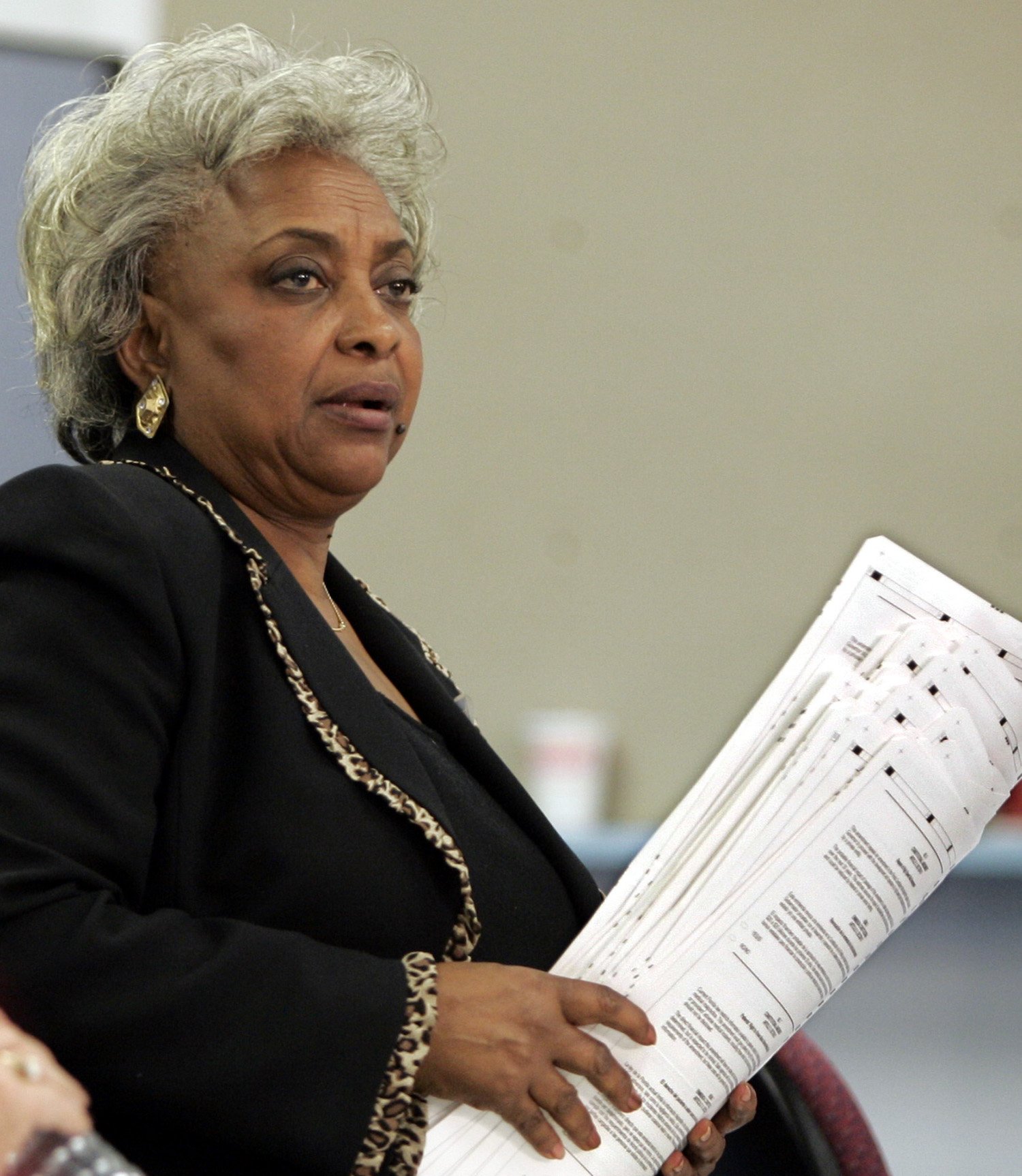 Supervisor of elections for Broward County Dr. Brenda C. Snipes holds a group of overvote ballots at the Broward county election equipment center in Ft Lauderdale, Florida, November 2, 2004. Overvotes are absentee ballots that have a vote for more than one candidate in a category. REUTERS/Gary I Rothstein

“So we put in a public records request to inspect some of the ballots, and if inspecting the paper ballot matched up, then it’s done, it will satisfy everyone,” Canova told TheDCNF. ” But the supervisor of elections stonewalled me for months.”

“I was told they didn’t have scanned images, even though on election night they put the ballots through a scanner. So we filed a discovery request to see the paper ballots,” he continued. “Three days later [Snipes] signed an order to destroy the ballots and certified that they were not the subject to ongoing litigation.”

“Her excuse was she just signed anything put in front of her and didn’t read it,” Canova said. “Then she said the ballots were put in the wrong place and that’s why they were destroyed. She concealed the destruction for two weeks.”

Snipes’s position is an elected one, and she is a Democrat.

Canova said even though Snipes admitted to destroying the ballots in a videotaped deposition, the government continued to fight the case.

“We’re dealing with organized crime. I just don’t trust anything that comes out of this office,” he said. He said Republicans had joined with him to try to defeat Wasserman Schultz, saying “I might not agree with Tim about Medicare for All, but this about integrity, this is about getting out corruption.” 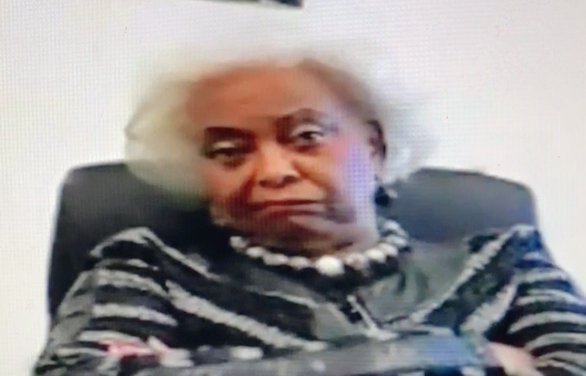 She sure wasn’t happy in her sworn deposition where she ADMITS to illegally destroying all YOUR paper ballots in my 2016 race against Wasserman Schultz. Watch/Listen to Snipes’ LAME EXCUSE for committing felonies yet to be investigated by law enforcement. https://www.youtube.com/watch?v=YGwG3WrqBRs&t=21s …

703 people are talking about this

Canova posted video of people putting bags of ballots into private vehicles, including a sports car.

Caught On Video: Concerned citizen sees ballots being transported in private vehicles & transferred to rented truck on Election night. This violates all chain of custody requirements for paper ballots. Were the ballots destroyed & replaced by set of fake ballots? Investigate now!

52.6K people are talking about this

Rubio also retweeted that a teacher said found a box of provisional ballots left behind at a school after Election Day. 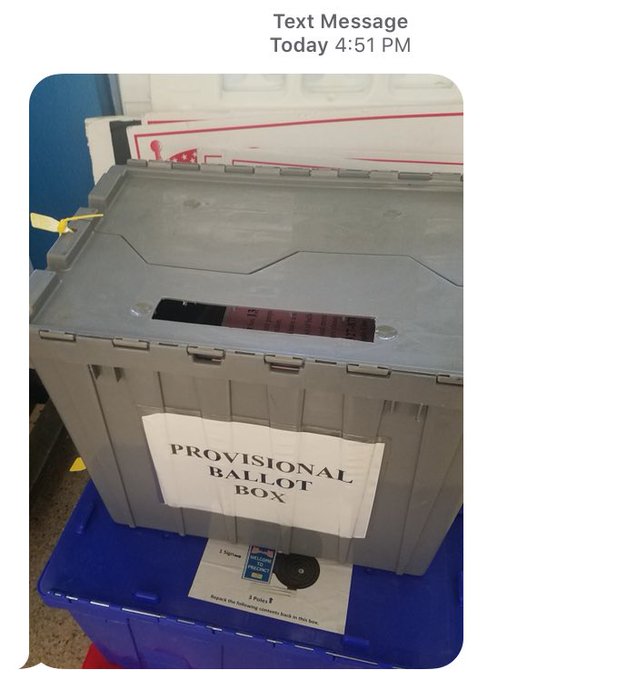 In Broward County, Miramar Elementary School teacher Lakeisha Sorey came across a box labeled “Provisional ballots” left behind at the school from Election Day & she’s concerned it might have votes. She didn’t look in the box because she didn’t want to tamper with it

13.8K people are talking about this

1,730 people are talking about this