The Woke Mob Is Running Apple 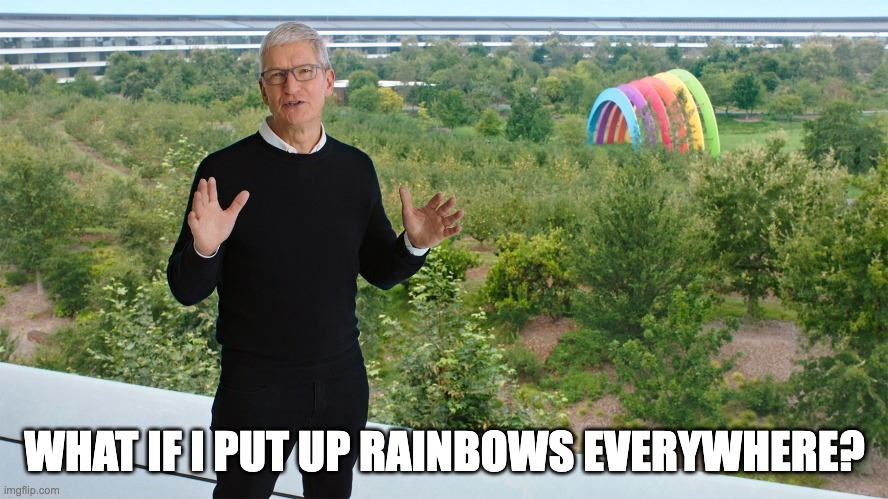 Apple employees have reportedly begun petitioning against the tech giant’s plans to demand workers return to offices for three days a week starting next month. Apple employees have mounted repeated protests against returning to the office. The employee group “Apple Together” labeled the woke company racist, writing that returning to the office “will make Apple younger, whiter, more male-dominated, more neuro-normative, more able-bodied, in short, it will lead to privileges deciding who can work for Apple, not who’d be the best fit.

The Financial Times reports that earlier this month, Apple told corporate employees that they must return to company offices for three days a week starting next month. The FT reports that a number of employees at the company are unhappy with the plan and are calling for the introduction of “location flexible work.”

FT cites a petition organized by a group called “Apple Together” that has been gaining signatures as its passed around the company. Apple has been pushing for a return to in-person work for some time now, with CEO Tim Cook defending the company’s calls for employees to return to offices. Cook said that this was an effort to protect the “in-person collaboration that is so essential to our culture.”
The FT writes:
Apple Together counters that a “uniform mandate from senior leadership” fails to respect the “many compelling reasons” why some employees are “happier and more productive” working outside of traditional office arrangements.
The group is demanding that Apple allows employees to work with their “immediate manager” to decide their working arrangements, and that they should not be subject to “high-level approvals” and “complex procedures” or have to provide private information.
The Apple Together petition said that Apple should “encourage, not prohibit, flexible work” so that employees can “feel comfortable to ‘think different’ together.” Apple still appears to be sticking to its plan to demand employees return to working in-person at the office three days a week starting on September 5.

In May, Apple was even deemed racist for requesting employees return to work, as Apple Together condemned the decision, claiming that such a demand is actually an attempt to make the workforce “younger, whiter, and male-dominated.”
The group published a letter, stating:
Apple will likely always find people willing to work here, but our current policies requiring everyone to relocate to the office their team happens to be based in, and being in the office at least 3 fixed days of the week, will change the makeup of our workforce. It will make Apple younger, whiter, more male-dominated, more neuro-normative, more able-bodied, in short, it will lead to privileges deciding who can work for Apple, not who’d be the best fit.
Privileges like “being born in the the right place so you don’t have to relocate”, or “being young enough to start a new life in a new city/country” or “having a stay-at-home spouse who will move with you”. And privileges like being born into a gender that society doesn’t expect the majority of care-work from, so it’s easy to disappear into an office all day, without doing your fair share of unpaid work in society. Or being rich enough to pay others to do your care-work for you.
https://www.breitbart.com/tech/2022/08/22/woke-revolt-apple-employees-protest-against-plans-to-return-to-office-again/