United We Dream, described as the “largest immigrant youth-led network in the country,” rejected President Donald Trump’s immigration framework that would give 1.8 million young illegal aliens a pathway to citizenship.

“Let’s call this proposal for what it is: a white supremacist ransom note,” Greisa Martinez Rosas, advocacy director for UWD, said in a statement on Twitter. “Trump and Stephen Miller killed DACA and created the crisis that immigrant youth are facing.”

“They have taken immigrant youth hostage, pitting us against our own parents, black immigrants and our communities in exchange for our dignity,” Martinez Rosas said. 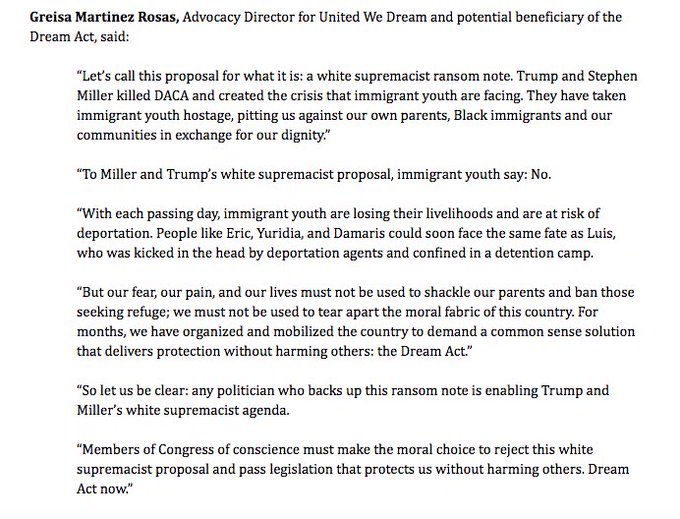 “Let us be clear: any politician who backs up this ransom note is enabling Trump and Miller’s white supremacist agenda.” #DreamActNowhttp://bit.ly/2BsWeWM

“Mi Familia Vota rejects Trump’s deceptive immigration plan that uses Dreamers’ futures to obtain $25 billion for a border wall, massive cuts in legal immigration that go against our national values, mass deportations, fierce enforcement, and the destruction of families across America,” a press release distributed to the media. “Dreamers will not accept this proposal at the expense of their families and the good of the nation.”

“President Trump has put forth an immigration proposal that is destructive to our families, communities, and the values on which this country stands,” Ben Monterroso, executive director of Mi Familia Vota, said in the statement.

“This is a callous attempt to splinter immigrants and can only be shattering to the 700,000 Dreamers whose futures, as the Americans that they are, depend on Congress passing a resolution that will permanently protect them from deportation,” Monterroso said.

“He stole DACA from the Dreamers, and now he wants to sell it back at a ridiculous price that wastes money and goes against all of our principles,” Monterroso said. “The depths of racism, hatred, and bigotry that is in the latest White House proposal is repugnant; this is a reflection of a president who does not understand family values or human dignity.”

On Thursday, the White House revealed a proposal to extend legal status and a path for citizenship for 1.8 million illegal immigrants reportedly brought to the country as children in exchange for $25 billion in funding for the wall, an end to chain migration across the board, and an end to the visa lottery program.

A senior administration official told reporters that the 1.8 million number would be restricted by minor adjustments to timeframes and dates of entry issues.

“The argument by some people in Congress is that there is another 690,000 roughly that never got around to registering but fall into the general category, age, and all the rest of it,” the official said. “Those combined come to 1.8 million.”

The path to citizenship would require a 10-12 period where recipients would be required to demonstrate good behavior, work and education requirements, and good moral character.

We will not pay with our families and our communities as ransom for our own freedom. We will not be bargaining chips for the criminalization and deportation of other immigrants. We already have a solution that Congress must pass: #DreamActNow https://twitter.com/ananavarro/status/956664190877433861 …

But this is not a good deal, according to UWD.

“With each passing day, immigrant youth are losing their livelihoods and are at risk of deportation,” Martinez Rosas said. “People like Eric, Yuridia, and Damaris could soon face that same fate at Luis, who was kicked in the head by deportation agents and confined to a detention camp.”

“But our fear, our pain, and our lives must not be used to shackle our parents and ban those seeking refuge; we must not be used to tear apart the moral fabric of this country,” Martinez Rosas said. “For months, we have organized and mobilized the country to demand a common-sense solution that delivers protection without harming others: the Dream Act.”