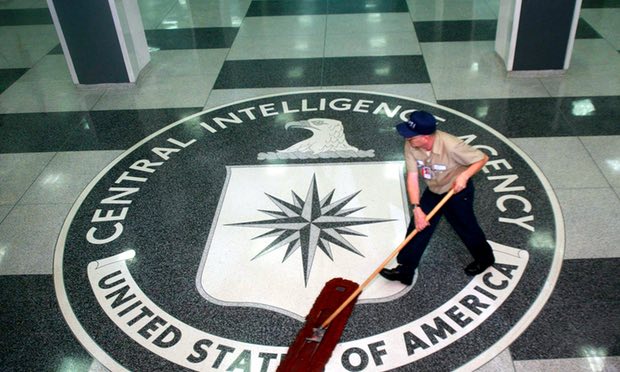 In the Washington security establishment, however, the leaks are being viewed more as the latest battle in a struggle between US and Russian intelligence services being played out in the US political arena – a fight in which WikiLeaks is widely seen as sitting firmly in Moscow’s corner.

The latest leaks land amid an ongoing and very public feud between the US president and the country’s intelligence agencies over Kremlin efforts to influence the election in Donald Trump’s favour. In recent months, the president has repeatedly denigrated US intelligence agencies – going as far as comparing them to the Nazi regime – while openly cheering on WikiLeaks activities. He has also alleged, so far without any evidence, that the Obama administration spied on himand his election campaign.

The apparent CIA hacking tools published by WikiLeaks feed directly into that struggle. Some Trump supporters have claimed that the apparent Russian hacking attacks could be a “false-flag” operation, hinting it was carried out by the new president’s domestic foes, and the “Vault 7” documents published on Tuesday give them potential ammunition.

The WikiLeaks press release highlights the CIA’s “Umbrage” group, said to collect a library of hacking tools used by intelligence agencies of foreign countries, “including the Russian Federation”, allowing them to conduct false flag operations.

“With Umbrage and related projects the CIA cannot only increase its total number of attack types but also misdirect attribution by leaving behind the ‘fingerprints’ of the groups that the attack techniques were stolen from,” WikiLeaks said.

James Lewis, senior vice-president at the Centre for Strategic and International Studies and an expert on cyber security, speculated that the motive behind the leak could be to underpin the false flag narrative of the Trump camp.

“This might be one explanation for the leaks – it’s data to build a case that the Russian interference and connections are a secret ‘deep state’ plot, as the false flag bits in WikiLeaks ‘shows’,” Lewis said, putting “Vault 7” in the context of the trial of strength between the president and intelligence agencies.

“Mr Trump, who last year angrily dismissed the conclusion of intelligence officials that the Russians interfered in the presidential election to boost his candidacy, has now asked both his staff and a congressional committee investigating Moscow’s influence on the election to turn up evidence that Mr Obama led an effort to spy on him,” he said.

Perceptions of WikiLeaks in the west have changed markedly since it first became widely known in 2010 with the release of huge numbers of classified US documents from the Afghanistan and Iraq wars, as well as US embassies around the world. WikiLeaks was widely embraced by opponents of those wars and supporters of greater government transparency.

But since its high-profile role in the 2016 presidential election, it is now viewed with far greater scepticism. Its leaks focused exclusively on Hillary Clinton’s camp, and were released at critical moments in the campaign. (Following the dump of nearly 2,000 emails hacked from the Hillary Clinton campaign, Trump told voters: “I love WikiLeaks!”)

Roger Stone, a former Trump adviser, wrote on Saturday night that he had a “perfectly legal back channel” to WikiLeaks’ founder, Julian Assange. Stone then deleted the message.

In early January, the CIA, National Security Administration (NSA) and FBI assessed with “high confidence” that Russian military intelligence was behind the anonymous hackers Guccifer 2.0 and DCLeaks.com, which stole data from prominent Democrats and passed it on to WikiLeaks.

“Moscow most likely chose WikiLeaks because of its self-proclaimed reputation for authenticity. Disclosures through WikiLeaks did not contain any evident forgeries,” the agencies found.

Assange has insisted that the documents did not come from Russian sources, although the organisation also says that in most cases it does not know the sources of the data passed on to it.

In a press release announcing the latest document dump, WikiLeaks suggested that the original source was a former US government hacker or contractor.

Assange has been living in the Ecuadorian embassy in London for more than four years, since Sweden sought his extradition for questioning on an accusation of sexual assault. In that time, he has hosted his own show on the Russian state-run television channel RT (formerly Russia Today).

WikiLeaks has published little or no material that could be seen as damaging to Russia, although Assange has argued that is because the leaks the organisation receives are overwhelmingly in English, while Russian-language material finds its way to other outlets.

“There is a lot of circumstantial evidence of the links between Assange and Russia,” said Susan Hennessey, a former NSA lawyer now at the Brookings Institution. “It’s certainly not a coincidence that Russian military intelligence selected WikiLeaks as a distribution platform for its Democrats hack.”

“WikiLeaks’ involvement creates a reason for suspicion. It has committed itself to putting out material that is harmful to western interests, but has assiduously avoided releasing material that could be perceived as damaging to Russian interests.”