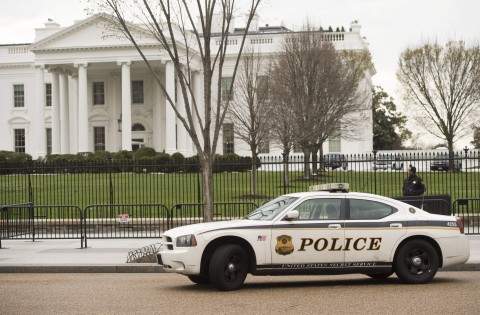 Sean Patrick Keoughan of Roanoke, Virginia was arrested after he pulled up to a security checkpoint at 15th Street and East Street NW near the White House at 11pm on Saturday night in a stolen 2017 Chevrolet Impala.

According to police, Keoughan told Secret Service, “There’s a bomb in the trunk,” while holding an object in his hand. As he was being arrested, Keoughan added, “This is a test.”

A robot was dispatched to investigate the car but nothing was found. Keoughan was subsequently charged with making false bomb threats and unauthorized use of a vehicle.

Earlier in the day there was another security scare after a man breached the buffer zone around the White House “in an apparent attempt to get to the White House fence,” although he was not able to jump the fence.

Earlier this month, Jonathan Tran did manage to make it past the fence before walking around White House grounds for 17 minutes before being spotted. He was able to get close to a White House entrance before being apprehended. Tran was reportedly concerned about Russian ties to Trump and was attempting to deliver a message to the president.

In a related story, the Secret Service announced that it would permanently remove a top special agent from her position after she posted on Facebook that she would not take a bullet for Trump.

Given the innumerable death threats against Trump, including a purported assassination attempt last year, the numerous security scares around the White House, along with Keoughan’s admission that his intention was to carry out a “test,” if there was a serious plan to assassinate the president, its plotters can only be learning from these incidents.

The hysteria being generated by the mainstream media in response to Trump simply moving forward with the policy agenda he promised during his campaign will undoubtedly embolden disturbed individuals to believe they have the moral high ground, especially in light of the fact that numerous celebrities and journalists have also called for Trump to be killed.

Man Involved in White House Bomb Scare: “This is a Test”