Former FBI Director James Comey revealed in closed-door testimony with House Republicans on Friday that he deliberately concealed an explosive memorandum about his one-on-one Oval Office meeting with President Trump in February 2017 from top Department of Justice officials.

The former FBI head also acknowledged that when the agency initiated its counterintelligence probe into possible collusion between Trump campaign officials and the Russian government in July 2016, investigators “didn’t know whether we had anything” and that “in fact, when I was fired as director [in May 2017], I still didn’t know whether there was anything to it.” 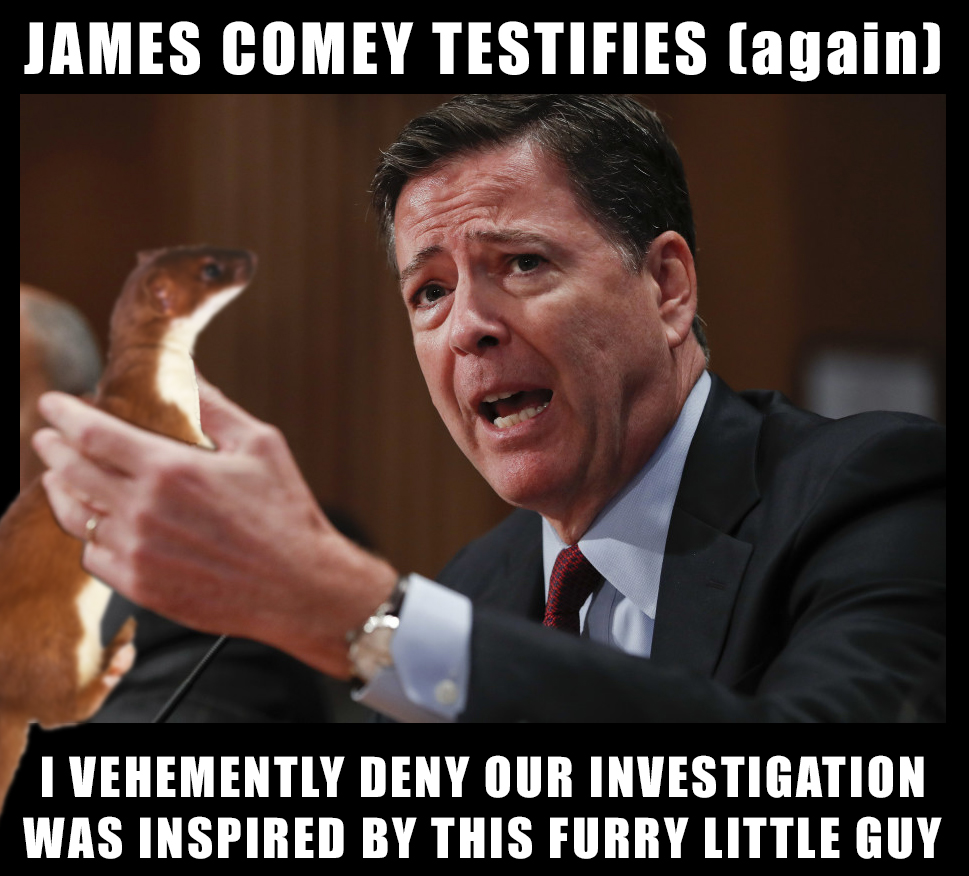 His remarks square with testimony this summer from former FBI lawyer Lisa Page, whose anti-Trump texts became a focus of House GOP oversight efforts. Page told Congress in a closed-door deposition that “even as far as May 2017” — more than nine months after the counterintelligence probe commenced — “we still couldn’t answer the question” as to whether Trump staff had improperly colluded with Russia.

Comey further testified on Friday that he and his aides were “all very concerned” about how the president had spoken of the probe into fired National Security Adviser Michael Flynn in a private Oval Office meeting, according to a 235-page transcript of his remarks released as a part of an agreement between House Republicans and Comey.

The fired FBI director wrote in his memorandum that Trump had told him, “I hope you can let this go,” amid reports that Flynn had lied to the FBI and senior White House officials about his contacts with Russia’s government.

But despite that concern, Comey told Rep. Jim Jordan, R-Ohio, that he and his team made a “judgment call” not to tell then-Attorney General Jeff Sessions or his lieutenants about Trump’s comments, saying he thought Sessions would recuse himself “in a matter of days” from the Russia probe. 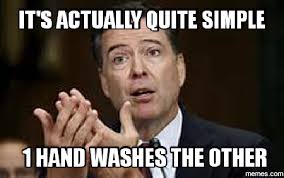 “We agreed that we ought to hold it very close, not brief the investigative team at this point and not go over and talk to the leadership of the Department of Justice, to hold onto it until we got a new deputy attorney general and they sorted out how they were going to supervise the Russia investigation,” Comey said.

Deputy Director Andrew McCabe, who was later fired for leaking a self-serving story to the press and lying about it to Comey and federal investigators, was among the brain trust Comey sat down with to discuss his options. The two were joined, Comey said, by then-FBI General Counsel James Baker and Comey’s chief of staff, James Rybicki.

Comey told lawmakers that others may have been present as well, including FBI Deputy Director David Bowdich (who was an associate deputy director at the time), National Security Branch Executive Director Carl Ghattas, and FBI counterintelligence head Bill Priestap, who recently announced he would leave the agency by year-end. Comey said that he did not believe anti-Trump FBI Agent Peter Strzok or former FBI lawyer Lisa Page were in the room.

Comey testified: “We believed that the Attorney General, Mr. Sessions, was on the cusp of recusing himself from anything related to Russia, so it didn’t make any sense to brief him on it, and that there was no deputy attorney general at that point.”  (Sally Yates, a holdover from the Obama administration, was terminated by Trump in late January 2017 after she refused to defend the administration’s ban on travel from several Muslim-majority nations in court.)

“We agreed that we ought to hold it very close.”

Sessions recused himself from Russia-related matters shortly afterward, in early March 2017 — a decision that Trump has since called a “terrible mistake,” although it was recommended by career Justice Department officials in part because Sessions had met with Russian dignitaries while assisting with the Trump campaign. But Jordan pressed Comey on why he decided not to tell the next-in-command at the DOJ.

“I don’t know who was No. 3 at that point,” Comey responded. “There was an acting — there was a U.S. Attorney acting as the deputy attorney general, who we knew would be in the seat only until Rod Rosenstein was confirmed,” he added, in an apparent reference to former Acting Deputy Attorney General Dana Boente, who served until Rosenstein took the job in April 2017.

Comey continued that “it made sense to hold onto it” because “we saw no investigative urgency.”

In a memorandum documenting his phone conversation with Trump on March 30, 2017, about how to “lift the cloud” of the Russia investigation from the White House, Comey wrote, “I called the acting attorney general and relayed the substance of the above and said I was telling him so he could decide what guidance to give me, if any.”

In a call from the White House that day, Comey wrote that Trump had asked him “several times” to “find a way to get out” to the public that he was not actively under investigation as part of the ongoing federal probe into possible Russia collusion with his team. Comey assured Trump, and congressional leaders, that the president was not being investigated at the time.

House Republicans are set to have another opportunity to question Comey before they lose majority status when the new Congress is seated in January. The fired FBI director told reporters his return visit for more testimony will likely come the “week after next.”

Comey largely frustrated GOP lawmakers during Friday’s session, in large part because his lawyers urged him not to answer numerous questions. On Twitter after his testimony, Comey sharply criticized what he characterized as Republicans’ “desperate attempt to find anything that can be used to attack the institutions of justice investigating this president.”

But while Comey insisted in the interview that “we never investigated the Trump campaign for political purposes,” the transcript shows he claimed ignorance or memory lapses in response to questions concerning key details and events in the Russia investigation, which some GOP lawmakers continue to claim was improperly conducted.

COMEY CLAIMS NOT TO REMEMBER KEY DETAILS THROUGHOUT TESTIMONY

The transcript reveals lawmakers’ frustration with his lack of specifics. Asked if he recalled who drafted the FBI’s “initiation document” for the July 2016 Russia investigation, Comey said, “I do not.” He again claimed not to know when asked about the involvement in that initiation of Peter Strzok, whose anti-Trump texts later got him removed from the special counsel’s probe.

When asked if the FBI had any evidence that anyone in the Trump campaign conspired to hack the DNC server, Comey gave a lengthy answer referring to Special Counsel Robert Mueller’s investigation as to why he couldn’t answer.

54.5K people are talking about this

Leakin’ James Comey must have set a record for who lied the most to Congress in one day. His Friday testimony was so untruthful! This whole deal is a Rigged Fraud headed up by dishonest people who would do anything so that I could not become President. They are now exposed!

66.4K people are talking about this

But there was a time when Comey, by his own accounting, didn’t think of himself as the kind of person who would leak information behind the president’s back.

In a Jan. 28, 2017, dinner with Trump in the White House’s Green Room, Comey wrote in a since-released memorandum that he told the president, “I don’t do sneaky things, I don’t leak, I don’t do weasel moves.“

At the time James B. Comey was fired as FBI director, his agency was still attempting to corroborate claims made in the infamous, largely-discredited anti-Trump dossier, Comey admitted.

In testimony to the House Judiciary Committee on Friday, Comey described an effort “to try to replicate, either rule in or rule out, as much of that collection of reports that’s commonly now called the Steele dossier as possible, and that that work was ongoing when I was fired.” Trump dismissed Comey from the FBI on May 9, 2017.

A transcript of Comey’s testimony was released on Saturday. During one exchange with lawmakers, Comey said that FBI efforts to probe the dossier given to the agency by former British spy Christopher Steele started “sometime in ’16” almost immediately after Steele provided the charges.

The timing is instructive. In previous testimony, Comey admitted that he pushed back against a January 2017 request from President Donald Trump to possibly investigate the origins of the claims made inside the Steele dossier.

Comey’s latest testimony shows that even while he was cautioning Trump against ordering a probe of the dossier claims, Comey’s own FBI was quietly conducting an ongoing investigation into the wild content of that very dossier.

During prepared remarks for the Senate Select Committee on Intelligence, delivered on June 8, 2017, Comey related how he pushed back against a suggestion from Trump to investigate the dossier claims.

The former FBI chief stated that following a January 6 Oval Office meeting with Intelligence Community leaders, Comey “remained alone with the President Elect to brief him on some personally sensitive aspects of the information assembled during the assessment.”’

It is clear Comey was referring to the dossier since he writes the “salacious and unverified” material was about to be publicly reported by the news media. Four days after that briefing, the dossier was published by BuzzFeed.

In his statement summarizing his conversation with Trump, Comey refers to Russian prostitutes, a key component of the dossier:

He said he had nothing to do with Russia, had not been involved with hookers in Russia, and had always assumed he was being recorded when in Russia.

In a private White House dinner with Trump on January 27, Comey says the topic of the “salacious material” again came up and he reveals that Trump was considering asking the FBI to investigate the origins of the claims.  Comey pushed back against that idea.

During the dinner, the President returned to the salacious material I had briefed him about on January 6, and, as he had done previously, expressed his disgust for the allegations and strongly denied them. He said he was considering ordering me to investigate the alleged incident to prove it didn’t happen. I replied that he should give that careful thought because it might create a narrative that we were investigating him personally, which we weren’t, and because it was very difficult to prove a negative. He said he would think about it and asked me to think about it.

The Steele dossier was reportedly funded by Hillary Clinton’s 2016 presidential campaign and the Democratic National Committee (DNC) via the Perkins Coie law firm.

A House Intelligence Committee memo released last February documented that as FBI director, Comey signed three FISA applications to spy on former Trump adviser Carter Page with the dossier serving as part of the basis for the warrant requests.

Comey signed the applications without telling the FISA court that the dossier was financed by Trump’s primary political opponents, the memo related.

“Neither the initial application in October 2016, nor any of the renewals, disclose or reference the role of the DNC, Clinton campaign, or any party/campaign in funding Steele’s efforts, even though the political origins of the Steele dossier were then known to senior and FBI officials,” the memo states.

The GOP memo also relates that after Steele was terminated months earlier as an FBI source a “source validation report conducted by an independent unit within FBI assessed Steele’s reporting as only minimally corroborated.” Still, Comey saw fit, according to the Republican and Democrat memos, to utilize the dossier in the FISA documents. He also briefed Trump and then-President Barack Obama on the dossier contents.