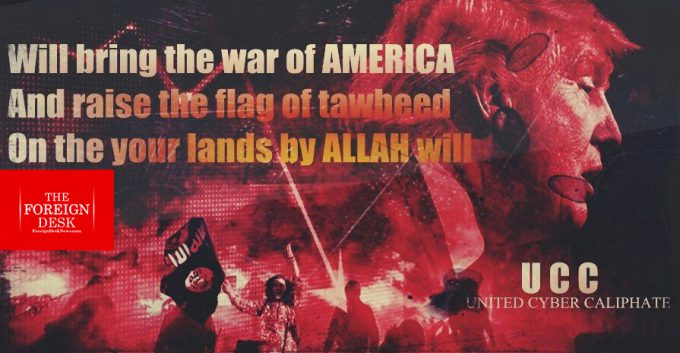 The leader of a notorious ISIS hacking group responsible for distributing so-called ‘kill lists,’ has reportedly been killed in a U.S. drone strike.

Though jihadis initially remained skeptical at the news of Agha’s death, the group’s Telegram channel posted a video Thursday acknowledging “Our leader Osed Agha has been killed by a U.S. airstrike.”

The White House has not yet confirmed the strike.

The UCC group routinely posts ‘kill lists,’ containing names and addresses of Americans, ranging from ordinary citizens to police officers and State Department employees. Experts contend that much of the data is obtained from publicly available databases, though officials disagree whether these lists pose a serious threat or are intended to instill fear and panic among Americans.

The group previously posted vivid images expressing their desire to carry out attacks on the West, including a poster featuring U.S. President Donald Trump saying, “Will bring the war of America and raise the flag of tawheed (oneness) on the your lands by Allah’s will”

In a video message, the group now urges followers to continue Agha’s work, displaying a U.S. flag followed by an explosion and the word “soon,” likely a veiled call for jihadis to target the U.S. in revenge.

The UCC posted a message eulogizing Agha as a ‘Martyr’ and someone who “would leap with a sword in his hands to cut-off the heads of the kufar. He would attack the apostate’s Web Sites reaping their data and ruining their plans.”

“You are either with us or against us”

Recently, the UCC published a video urging Muslims hackers in the West to join its ranks and fight a war against the kufar (non-believers) and also posted a video aiming a direct threat against a leading online counter extremism organization

Several jihadi hacking groups pledged allegiance to the Islamic State in 2014, the most famous of them “Cyber Caliphate,” whose team included Junaid Hussain, a British-Pakistani hacker who fled the U.K. to Syria in 2013.

Hussain, a high profile recruiter for ISIS who hacked CENTCOM’s Twitter and YouTube accounts, was considered the second ranked British jihadi behind Mohammed Emwazi (Jihadi John). Hussain was killed in a U.S. airstrike in Syria in August 2015.

In April 2016, four hacking groups consolidated as one under the name United Cyber Caliphate (UCC).

Agha routinely posted videos threatening to target websites of Western countries and U.S. coalition partners and urged Muslims in Western countries to “use skills that Allah has allowed them to gain in order to defend Islam and the oppressed Muslims by targeting the enemy’s websites and cyber-systems.”

Little personal information is known about Agha, though he may have been of Indonesian origin, according to some social media posts.