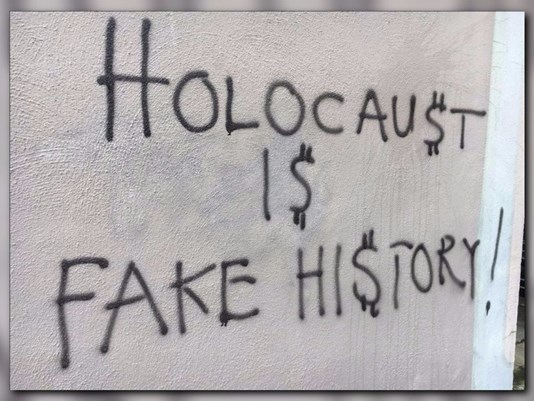 en. Maria Cantwell met Friday with about a dozen faith leaders in Seattle, as part of a round table organized on the same day as another case of vandalism targeting a local synagogue.

Anti-Semitic and Holocaust-denying graffiti was found spray-painted on the campus of Temple De Hirsch Sinai.

According to Seattle police, an off-duty officer spotted the the spray painted message Friday around 5 a.m. The message, describing the Holocaust as “fake history,” was found on a exterior wall of the temple.

“The vast majority of Americans need to stand up to stand up and resist this type of intolerance and to demonstrate in no uncertain terms, that it is not acceptable and not permissible,” Rabbi Daniel Weiner told KING 5 following the incident at his congregation.

“Temple continues to take vigilant, substantive security measures to insure the safety and well-being of our community. In light of other recent threats and upcoming celebrations, we have further enhanced these measures,” said Weiner in a statement to members of his congregation.

SPD’s Bias Crimes unit is investigating the hate-graffiti, and there will be additional police patrols in the area.

Rabbi Weiner had been scheduled to attend a round table with faith leaders convened by U.S. Senator Maria Cantwell (D-Washington), but had to stay behind in light of the incident at his synagogue.

More than ten leaders representing half a dozen different religions shared their experiences of an increase in incidents, bullying and vandalism.

“The problem that we’re facing right now is the emotional and mental violence. Right now, within the Jewish community, they’re just threats; we ache for all of the other communities were it’s not just threats,” she continued. “At the same time, this emotional violence has had a tremendous toll on us in just a few short months.”

“In fact, 2015 was the year that we had the highest levels of hate crimes against Muslims in America. It wasn’t just with the Trump election, it preceded that, and it goes well beyond one person. It affects both parties; it affects people on all kinds of levels, socioeconomic classes, religions, backgrounds. We are seeing it across the board,” said Afzali.

“My view is that as soon as you allow hatred and bigotry to be acceptable against one community, then it will be affecting others.”

Faith leaders expressed a need for increased awareness, education and interagency, interfaith collaboration. They also asked Senator Cantwell for additional resources to provide increased security for their places of worship.

“We’ve had so many incidents and threats, I think it’s time now for a national task force on this issue. I think we need to have a more holistic approach about why we’re having this increase and what we can do to be aggressive about it,” Cantwell told KING 5 following the meeting.

Investigating the increase in recent incidents has become a bi-partisan effort. Washington’s delegation of six Democrats and four Republicans, sent a letter to the Department of Justice and FBI, asking for an update on their investigation into recent threats against Jewish Community Centers.

Also, this week all 100 U.S. senators wrote the Department of Homeland Security calling for “swift action” on the matter.

“We’re definitely going to work with FBI and law enforcement on this. We know they’re working aggressively on these cases. We want to make sure they have adequate resources,” said Cantwell.