Remember how during the 2016 presidential primary those oh-so principled Never Trumpers kept warning us that Donald Trump was a con man, a faux conservative, a secret Democrat making promises (including about exiting the Iran deal) he had no intention of keeping? Remember how those oh-so principled Never Trumpers told us that anyone who believed Trump’s promises was a bumpkin, a hillbilly, a yokel, a jake, a hick, a clodhopper, a Grade A hayseed?

Well, here we sit 15 months into Trump’s presidency, a presidency where he has proved to be the most promising-keeping-sumbitch-of-a-president in my lifetime. And here is Never Trump once again proving themselves to be the true soy boy swindlers.

Yes, while Trump kept his promise to exit the disastrous Iran deal, a promise he made countless times on the campaign trail, look who was actually lying to us — no less than oh-so principled Never Trump Resistance Leaders Sen. Jeff Flake (R-AZ) and Gov. John Kasich (R-OH),  who were both against the Iran deal before they were for it.

With an 18 percent approval rating in his home state, and to avoid a humiliating primary loss, Flake has wisely chosen not to run for re-election. But when he still thought he would have to face voters, Flake strongly and publicly opposed the Iran deal.

“While Congress has received assurances from the administration that it does not forfeit its ability to impose sanctions on Iran for behavior on the non-nuclear side, these assurances do not square with the text of the [agreement],” Flake said (quite correctly) at the time.

But now, we know that this Never Trumper was hustling us because now, Flake is magically in favor of the Iran deal and is even slamming Trump (on far-left CNN, naturally) for keeping his promise to withdraw: 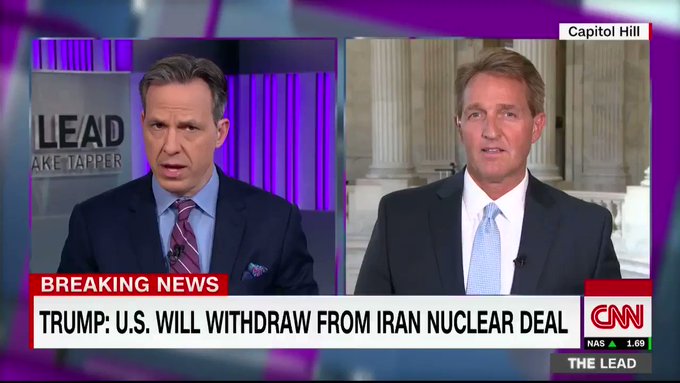 Jeff Flake in 2018: We should have stayed in the Iran deal.

Kasich is even worse. If you recall (and it is certainly understandable if you don’t), Kasich ran for president in 2016, and while running for president, Kasich told us over and over again that he was so gosh-darned opposed to the Iran deal, he wanted the Senate to go “nuclear” to stop it.

Per NBC News, the “Ohio governor regularly slams the Iran deal on the campaign trail, and he told the crowd on Tuesday ‘it’s a bad agreement. There are so many very poor parts of this thing.’”

Opposing the Iran deal was a major talking point for this son-of-a-mailman during his humiliating presidential run.

“President Trump’s decision to withdraw … was a mistake. It has gotten us nothing other than to remove constraints on Iran’s ability to produce nuclear weapons,” Kasich now says: 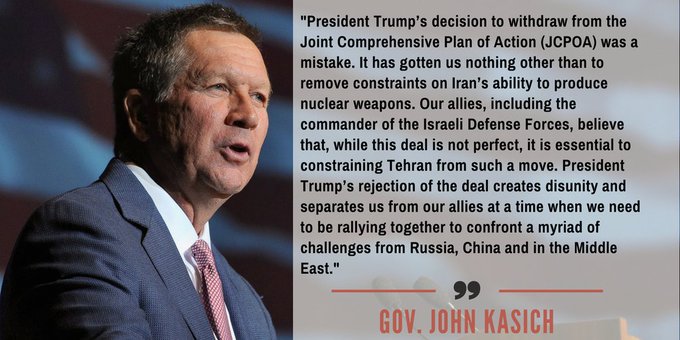 Gov. John Kasich statement on the withdraw from the Joint Comprehensive Plan of Action #IranDeal

In other words, voting for an establishment hack like Kasich would have been the true sucker move.

But we rubes already knew that.