‘¡No, no puede!’: New White House begins with English-only website as Team Trump breaks with Obama by nixing all Spanish-language content

Donald Trump will not be ‘El Presidente,’ judging from the website his White House launched on Friday.

The new whitehouse.gov, unlike the online home of the Obama administration, has no Spanish-language content.

The newly minted president made a point during the Republican primary season of his preference for immigrants to learn English, mocking former Florida Gov. Jeb Bush for speaking Spanish on the campaign trail.

‘We have a country where to assimilate, you have to speak English,’ Trump declared during a September 2015 debate.

Then-candidate Trump told ABC News weeks earlier that ‘while we’re in this nation, we should be speaking English.’

Trump uttered only Spanish word during the 23 debates and televised forums in which he participated, and it didn’t help him.

‘We have some bad hombres here, and we’re gonna get ’em out,’ he said in an October debate with Hillary Clinton, referring to illegal immigrants who remained in the United States despite convictions for violent crimes.

The chairman and CEO of U.S. English, the nation’s most vocal advocate of making English the official language of the United States, told DailyMail.com that the Trump administration shouldn’t give Spanish-speakers any special dispensation.

‘Maybe if they’re going to do it in Spanish, they should also use all 323 languages spoken in the United States, right?’ asked Mauro Mujica. ‘Why just one and not the other 322?’

Mujica cautioned that while ‘we have no problem with it,’ the English-only White House website might only be temporary as the new administration comes up to speed.

‘I would assume they’re deciding in how many languages they want to do it,’ he said, but ‘English is the de-facto official language of this country.’

‘I know many of those people including the president, but nobody has asked us what they should do,’ Mujica acknowledged.

‘We are continuing to build out the website both in the issue areas and then that area,’ he said.

‘But we’ve got the IT folks working overtime right now to continue to get all of that up to speed. And trust me, it’s just going to take a little bit more time but we’re working piece-by-piece to get that done.’

America’s new president lost the Hispanic vote to Hillary Clinton by a 65-29 margin in November, but it had little effect on the election’s outcome.

Exit polls showed they comprised just 11 per cent of the voting public, and were largely confined to non-battleground states like California, Texas, Arizona and New Mexico.

Mitt Romney, John McCain and George W. Bush, the three previous Republican presidential nominees, all made Spanish-language websites part of their campaign. So did Clinton’s.

But Trump made no serious bid to reach out to them in their native tongue – including online.

His campaign’s one visible effort – Spanish signs at the Republican National Convention that were meant to say ‘Hispanics for Trump’ – backfired.

They read: ‘Hispanics para Trump,’ instead of the grammatically correct ‘Hispanics por Trump.’ 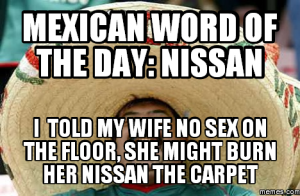