According to a Daily Caller review of TV clipping service Grabien, personalities on CNN and MSNBC used the words “Impeach,” “Impeachment,” or “Impeachable,” 179 times.

The review included only original Friday programming and ran up until each network learned that BuzzFeed’s report was in dispute — shortly before 8 pm.

While some anchors and pundits hedged that the BuzzFeed story could only lead to impeachment proceedings “if true,” others repeated the story more uncritically and suggested that the president would be forced to resign and might even face obstruction of justice charges.

MSNBC’s Katy Tur, for example, stated at the top of her show that “Donald Trump is facing the most damming report to date for his presidency. A story that could lead to hisimpeachment.”

Both outlets also interviewed a number of Democratic congresspeople to get their thoughts on the possibility of impeachment of the president. CNN’s Wolf Blitzer, for example, spoke to Democratic Rep. Jim Himes about the implications of the BuzzFeed report if it turned out to be verified, while MSNBC host Chris Matthews brought on Democratic Rep. Ted Lieu.

Matthews was perhaps the most eager cable television host to prop up BuzzFeed’s report, even insisting after the Special Counsel’s office’s statement that, “not accurate … it doesn’t mean it’s not true.”

A spokesperson for Special Counsel Robert Mueller’s team disputed the crux of the report within 24 hours of its publication, stating, “BuzzFeed’s description of specific statements to the Special Counsel’s Office, and characterization of documents and testimony obtained by this office, regarding Michael Cohen’s Congressional testimony are not accurate.”

“BuzzFeed’s description of specific statements to the Special Counsel’s Office, and characterization of documents and testimony obtained by this office, regarding Michael Cohen’s Congressional testimony are not accurate,” special counsel spokesperson Peter Carr said in a statement. 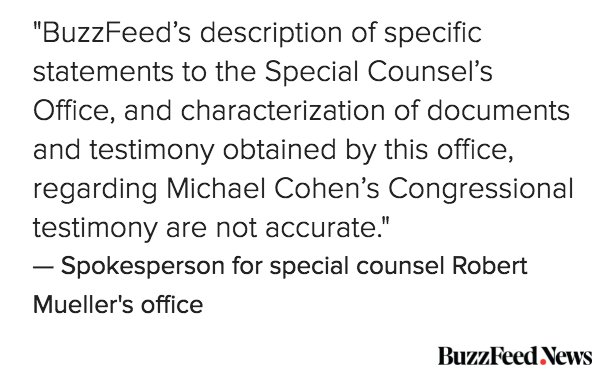 BuzzFeed, citing two unidentified law enforcement officials, alleged in a Thursday evening report that President Trump directed Cohen to lie to Congress and that he regularly briefed the president and his family on the Trump Tower project in Moscow. BuzzFeed claimed Cohen told Mueller that President Trump personally instructed him to lie about the timing of the project in order to obscure Trump’s involvement. No other news organization was able to confirm the report nearly 24 hours after it’s publication.

Further, BuzzFeed said Mueller’s investigators learned about President Trump’s directive “through interviews with multiple witnesses from the Trump Organization and internal company emails, text messages, and a cache of other documents.” The report says Cohen then acknowledged Trump’s instructions when he was interviewed by the Mueller team. “We are continuing to report and determine what the special counsel is disputing. We remain confident in the accuracy of our report,” Ben Smith, BuzzFeed’s editor-in-chief, said in a statement on the special counsel’s dispute of its reportage.

The special counsel’s statement came hours after several prominent news organizations, including Breitbart News, expressed deep skepticism about the report. In a Friday morning opinion-editorial, Breitbart News’s John Nolte wrote that report’s co-author, Jason Leopold, has gotten in hot water for erroneous reporting. Columbia Journalism Review has described Leopold “serial fabulist,” who falsely claimed Karl Rove would be indicted for leaking CIA operative Valerie Plame’s name to the media. Further, Nolte also pointed out that President Trump is not an avid user of email or text messages — thus leaving little other means to corroborate BuzzFeed’s story. Speaking with CNN’s New Day Friday morning, Leopold’s co-author, Anthony Cormier, stood by the report, though he did admit he had “not personally” seen the underlying evidence.

The report comes as House Democrats have promised a thorough look into Trump’s ties to Russia, and as Mueller is investigating Russia’s meddling in the 2016 election and contacts with the Trump campaign.

Giuliani noted that Cohen had pleaded guilty to lying and quoted federal prosecutors in New York who chastised him for a “pattern of lies and dishonesty over an extended period of time.” Mueller’s team, however, has called him a credible witness.

Reacting to the report, House Intelligence Committee chairman Adam Schiff (D-CA) pledged to “do what’s necessary to find out” if the report was true. He said the allegation that President Trump directed Cohen to lie in his 2017 testimony “in an effort to curtail the investigation and cover up his business dealings with Russia is among the most serious to date.”

The allegation that the President of the United States may have suborned perjury before our committee in an effort to curtail the investigation and cover up his business dealings with Russia is among the most serious to date. We will do what’s necessary to find out if it’s true.

BREAKING: President Trump personally directed his longtime attorney Michael Cohen to lie to Congress about negotiations to build a Trump Tower in Moscow in order to obscure his involvement. https://www.buzzfeednews.com/article/jasonleopold/trump-russia-cohen-moscow-tower-mueller-investigation?bftwnews&utm_term=4ldqpgc#4ldqpgc …

41.6K people are talking about this

Calling the allegations a “counterintelligence concern of the greatest magnitude,” Schiff said his committee had already been working to secure witness testimony and documents related to the Moscow deal. Rep. Joaquin Castro (D-TX), a fellow House Intelligence Committee member demanded that the president resign or be impeachment, once again, contingent upon the report’s accuracy.

“If the @BuzzFeed story is true, President Trump must resign or be impeached,” the lawmaker tweeted.

If the @BuzzFeed story is true, President Trump must resign or be impeached.

17.8K people are talking about this

Some of President Trump’s closest allies and media boosters, including his eldest son, Donald Trump Jr., mocked BuzzFeed on social media over its now-dispute story:

9,748 people are talking about this

I can hear the victory laps over on Don Jr’s twitter feed from here in DC. #RIPbuzzfeed

52 people are talking about this

1,924 people are talking about this

!” then they should quit even pretending to be unbiased. What a disgrace. #RIPbuzzfeed

8,367 people are talking about this
View image on Twitter 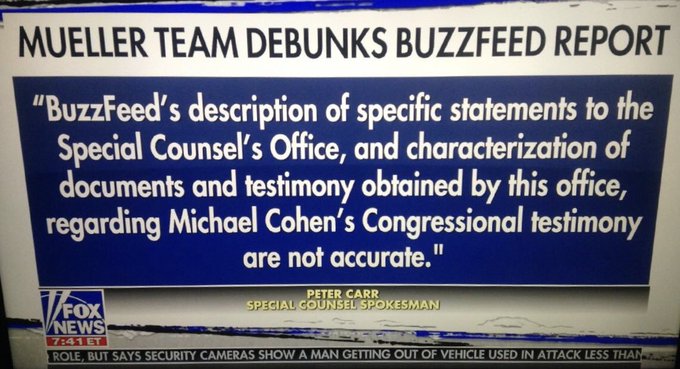 I told you all that the BuzzFeed story was nonsense.

The Buzzfeed bombshell bombed. It blew up in their face and the rest of the fake news are casualties too.

926 people are talking about this

The New Yorker’s Ronan Farrow said he turned down the chance to report parts of BuzzFeed’s report, citing a key source who repeatedly disputed the allegation that the president asked Cohen to lie before Congress.

I can’t speak to Buzzfeed’s sourcing, but, for what it’s worth, I declined to run with parts of the narrative they conveyed based on a source central to the story repeatedly disputing the idea that Trump directly issued orders of that kind.

6,628 people are talking about this

In November, Cohen stated in a guilty plea that he lied to Congress about a Moscow real estate deal he pursued on President Trump’s behalf during the heat of the 2016 Republican campaign. He claimed he lied to be consistent with President Trump’s “political messaging.”

Cohen was sentenced December 12 to three years in federal prison after pleading guilty to several charges, including campaign finance violations and making false statements to Congress. Prior to his sentencing, Federal prosecutors in Manhattan asked a judge to sentence Cohen to a “substantial term of imprisonment,” arguing that he had been motivated by “personal greed.”

Reacting to Cohen’s plea, President Trump called Cohen a “weak person” who was lying to get a lighter sentence and stressed that the real estate deal at issue was never a secret and never executed. Giuliani said that Cohen was a “proven liar” and that Trump’s business organization had voluntarily given Mueller the documents cited in the guilty plea “because there was nothing to hide.”

“There would be nothing wrong if I did do it,” the president said of pursuing the project. “I was running my business while I was campaigning. There was a good chance that I wouldn’t have won, in which case I would have gone back into the business, and why should I lose lots of opportunities?”

Cohen is scheduled to testify before the House Oversight Committee on February 7 about his work history with President Trump.