Apple Inc. AAPL 1.65% said it would pay a one-time tax of $38 billion on its overseas cash holdings and ramp up spending in the U.S., as it seeks to emphasize its contributions to the American economy after years of taking criticism for outsourcing manufacturing to China.

The world’s most valuable publicly traded company laid out its plans Wednesday in a statement that was full of big-dollar figures, though it said that much of the money reflected Apple’s current pace of spending.

Companies have long sheltered foreign profits offshore. Now the tax bill is coming due. How much will they pay? 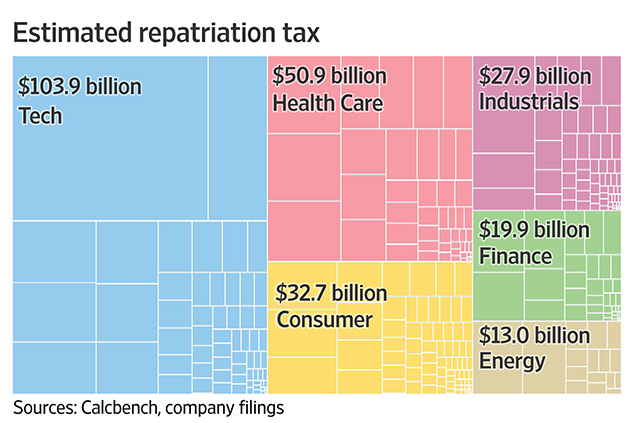 Apple said it would invest $30 billion in capital spending in the U.S. over five years that would create more than 20,000 jobs. The total includes a new campus, which initially will house technical support for customers, and $10 billion toward data centers across the country. It also will expand from $1 billion to $5 billion a fund it established last year for investing in advanced manufacturing in the U.S.

All told, Apple said it would directly contribute $350 billion to the U.S. economy over the next five years, with the bulk—about $55 billion this year, for example—coming from ongoing spending on parts and services from U.S. suppliers. That number also includes the federal tax payment and capital spending.

Chief Executive Tim Cook touted the plans as building on Apple’s support for the nation’s economy. “We have a deep sense of responsibility to give back to our country and the people who help make our success possible,” he said in a statement.

The announcement comes after President Donald Trump late last year signed into law a major overhaul of the U.S. tax code, under which companies must pay a one-time tax of 15.5% on overseas profits held in cash and other liquid assets. Apple cited those changes as the reason for its giant tax payment, which it said would likely be the largest of its kind, but didn’t say how much of its $252.3 billion in overseas cash holdings it plans to bring home.

The company said in November that it had earmarked $36 billion to cover deferred taxes on that money, assuming that it would eventually pay U.S. taxes on a portion of it by bringing it home.

Mr. Trump praised Apple’s announcement on Twitter, saying his policies allowed the tech giant “to bring massive amounts of money back to the United States.” He added, “Huge win for American workers and the USA!”

Apple didn’t provide historical comparisons for some of the figures it gave Wednesday. The company previously said it planned $16 billion in capital expenditures world-wide in the fiscal year that ends this September, up from $14.9 billion the previous year. However, Apple doesn’t break out its spending in the U.S., making it difficult to gauge how much of the $30 billion over five years it announced Wednesday is new.

Toni Sacconaghi, an analyst with Sanford C. Bernstein & Co., said Apple’s plans are in line with Trump administration goals, but it isn’t clear how many of the commitments are new. And he said the company could deliver on those commitments with existing cash flow—without needing to tap cash holdings.

“It’s a nice number and puts a foot forward in line with where the administration wants to go with adding jobs and building in the U.S.,” he said. But “it’s not clear these investments were impacted in any way by tax reform.”

Apple has faced criticism over the past decade for overseas manufacturing of its iPhones, of which it has sold more than one billion, rather than making them domestically. Mr. Trump during the presidential campaign blasted the company for outsourcing. He later called on Apple to build a factory in the U.S. and last year said Mr. Cook promised to build three plants in the U.S.

Apple has responded over the past year by pointing to its spending on procurement in the U.S. and to the size of the so-called app economy spawned by the iPhone, which the company says has created more than 1.6 million U.S. jobs.

The tax overhaul’s one-time levy on overseas cash is often referred to as a repatriation tax, although it applies whether companies leave their foreign profits overseas or bring them to the U.S. It is intended as a transition from the previous tax system, under which the U.S. taxed all world-wide profits of an American company except those kept overseas, to the new system, in which the U.S. won’t tax most foreign profits at all. Companies may choose to pay the one-time tax over eight years.

The $38 billion in taxes Apple owes reflects its growth in the decade since Congress last reduced taxes on overseas holdings. In 2006, Apple recorded a tax charge of $51 million as it repatriated $1.6 billion in cash held overseas for the fiscal year.

Winners and Losers of the GOP Tax Bill

Christmas may be over but WSJ’s Richard Rubin keeps the holiday spirit alive by explaining who’s getting presents and who’s getting coal with the GOP tax bill.

Apple’s accumulated foreign profits of $252.3 billion amount to just over a quarter of the U.S. tech industry’s total, a Wall Street Journal analysis of 311 large public companies found, and about 9.5% of the $2.65 trillion in foreign profits reported by all companies in the analysis.

A tax obligation of $38 billion would work out to about 15% of the S&P 500’s total obligation under the repatriation tax, based on figures from the Journal analysis and a separate analysis by Zion Research Group. Altogether, the Joint Tax Committee estimated last month, the tax should raise about $339 billion over 10 years from all companies—meaning Apple could account for 11% of the total.

The changes in U.S. tax law triggering Apple’s $38 billion tax obligation don’t affect the company’s responsibility to repay Ireland €13 billion ($15.9 billion) in unpaid taxes in Europe, according to a spokesman for Ireland’s Department of Finance. Apple has challenged the ruling.

Apple also told employees Wednesday it is issuing each of them a bonus of $2,500 in restricted stock, according to a person familiar with the matter. The planned bonus, reported earlier by Bloomberg, adds Apple to the growing list of companies that are rewarding employees due to the new tax law, including AT&T Inc. and ComcastCorp.

If Apple brings home a large share of its overseas cash it could decide to apply some of it to more buybacks and dividends. Apple has returned $233.9 billion to investors since fiscal 2012.

Mr. Sacconaghi expects Apple to provide an update on potential increases to those programs when it reports quarterly results in April or May, when it typically announces such plans. That would give it a chance to see how much cash other companies plan to return to shareholders from overseas holdings—moves that could please investors but aren’t as helpful to public perception as investments in jobs. “No company with that much cash wants to be the first to do a significant buyback,” he said.

The company said it would offer more information later this year on its planned new campus. The facility is expected to be located outside of California and Texas, where the company already operates campuses: in Austin, Texas, and its new $5 billion headquarters, Apple Park, in Cupertino, Calif.

Corrections & Amplifications
Apple had $252.3 billion in cash and marketable securities held overseas as of the end of November. An earlier version of this article incorrectly stated it had $246 billion overseas.