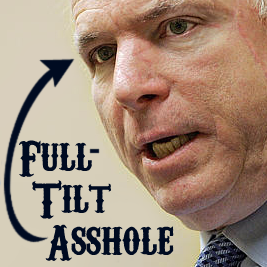 John McCain is increasingly mad as hell about President Trump. And on Friday, he went after Trump — hard.

During a speech at the Munich Security Conference in Germany, the Republican senator from Arizona delivered a pointed and striking point-by-point takedown of Trump’s worldview and brand of nationalism. McCain didn’t mention Trump’s name once, but he didn’t have to.

And even considering the two men’s up-and-down history and the terrible things Trump has said about McCain, it was a striking display from a senior leader of a party when it comes to a president of the same party.

In his speech, McCain suggested the Western world is uniquely imperiled this year — even more so than when Barack Obama was president — and proceeded to question whether it will even survive.

“In recent years, this question would invite accusations of hyperbole and alarmism; not this year,” McCain said. “If ever there were a time to treat this question with a deadly seriousness, it is now.”

In case there was any doubt that this was about Trump. Here’s what followed:

McCain continued: “But what would alarm them most, I think, is a sense that many of our peoples, including in my own country, are giving up on the West, that they see it as a bad deal that we may be better off without, and that while Western nations still have the power to maintain our world order, it’s unclear whether we have the will.”

Trump has repeatedly suggested a desire to pull out of or scale back on international involvement and agreements. His slogan is “America first,” after all. And it’s not just on free trade: It’s also when it comes to things like NATO, the transatlantic military alliance that Trump has suggested the United States is getting a bad deal on and has flirted with not enforcing.

Then McCain invoked some of those close to Trump and emphasized that his message won’t square with theirs:

McCain then concluded with another direct shot at Trump.

“I refuse to accept that our values are morally equivalent to those of our adversaries,” he said. “I am a proud, unapologetic believer in the West, and I believe we must always, always stand up for it. For if we do not, who will?

Ever since, it seems, he and McCain have been on a collision course. McCain didn’t fight back when Trump questioned his war-hero status long ago — perhaps because both men were trying to win elections — but the battle between McCain and the White House is picking up steam.

And on Friday, McCain traveled across the Atlantic to deliver a calculated, planned attack on Trump’s entire system of beliefs.