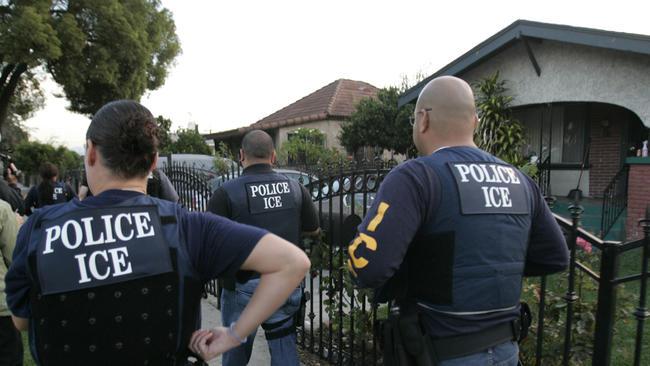 As he pulled away from the school and got back onto the main road, the vehicles’ lights flashed. Avelica-Gonzalez, with his wife and 13-year-old daughter in the car, pulled over. Agents for U.S. Immigration and Customs Enforcement, wearing jackets that said “POLICE” on the back, detained the 48-year-old father of four.

ICE officials said the arrest was routine, citing a 2014 order for Avelica-Gonzalez’s deportation. But amid growing fears of mass deportations under President Trump, the arrest has roiled the largely immigrant community north of downtown Los Angeles.

The arrest so shook the school, a public charter called Academia Avance, that administrators held an assembly Tuesday afternoon to discuss what happened and to ease fears. The school’s executive director, Ricardo Mireles, has since ordered his teachers to talk to students whose parents are here illegally about creating a family plan in case they are detained or deported.

“It’s unfortunate that we have to have minors now deal with reality,” he said. “You need to be ready. ‘Have you talked to your parents? Do you have power of attorney?’ ”

Since Trump took office, immigrant communities have been plagued by rumors — some true, many false. Recent targeted operations by ICE have resulted in hundreds of arrests. Such operations were common during the Obama administration but have garnered new scrutiny in recent months.

ICE has a long-standing policy directing agents to generally avoid conducting enforcement activities at so-called “sensitive locations” such as churches, hospitals and schools. But Avelica-Gonzalez’s arrest has sparked new concerns that ICE is loosening that policy — an accusation that federal officials deny.

The arrest this week has garnered widespread attention in part because Avelica-Gonzalez’s daughter captured parts of it on video.

Avelica-Gonzalez’s family says he was less than two blocks away from the school. ICE officials said he was arrested in the 3200 block of Pasadena Avenue, about half a mile from the school.

The 13-year-old, Fatima Avelica, is heard sobbing in the video. The Times matched video from the encounter with Google Maps images, which appear to show that the arrest happened about six blocks from Academia Avance, in the 3200 block of Pasadena Avenue. Another school, Hillside Elementary, is less than three blocks from where the arrest occurred.

Advocates and attorneys say this is the first time they’ve heard of ICE detaining someone so close to a school.

There have been numerous reports of ICE arrests at schools, forcing officials to separate fact from fiction.

Earlier this week, a rumor surfaced that ICE agents had raided an elementary school in Cerritos. Last week, reports on social media said ICE detained three students at Venice High School. The week before, there were rumors that ICE had raided an Oakland college. The Times checked into those reports, which all turned out to be false.

But national cases have stoked fears. One involved a woman who was detained by ICE agents last month while seeking domestic abuse protection at a Texas courthouse. In Virginia, agents arrested men outside a church warming shelter.

An ICE official who spoke on the condition of anonymity said agents try to arrest people at locations that will involve the fewest bystanders. Historically, that meant arresting people at their residences or in jail, but fewer immigrants have opened their doors in the last few years unless agents have a warrant. Additionally, many jails across the country stopped collaborating with ICE requests to detain immigrants until agents arrive. Because of that, more arrests now happen on the street, said the official.

The official said agents had Avelica-Gonzalez under surveillance, followed him to the school then determined where to safely stop the vehicle. Agents didn’t realize his other daughter was still in the car. Because the arrest was not carried out on school grounds, the official said, it does not represent a shift in policy. The official also noted that arrests by ICE’s fugitive operations teams, who locate immigrants with deportation orders, have remained flat over the past year.

He has two prior criminal convictions, said Emi MacLean, an attorney for the National Day Laborer Organizing Network. The organization put out a call to action the day he was arrested, asking supporters to tell ICE not to deport him.

MacLean said Avelica-Gonzalez was convicted of misdemeanor DUI and misdemeanor driving without a license in 2008. Another misdemeanor conviction, in 1998, was for receipt of stolen property when he bought a non-DMV-issued vehicle registration tag. Before 2015, immigrants living in California illegally could not get driver’s licenses.

In 2013, Avelica-Gonzalez filed paperwork with a “notario.” In Latin America, “notarios publicos” are qualified lawyers. In the U.S., people posing as notarios lack licenses and training and prey on immigrants.

The notario ran off with Avelica-Gonzalez’s paperwork and money, MacLean said, and he ended up with an order of deportation.

Avelica-Gonzalez is being held at the Adelanto Detention Facility near Victorville. His attorney filed an emergency stay of removal, preventing his immediate deportation, with the 9th Circuit Court of Appeals and expects a decision next week.

Last month, his administration swept aside nearly all restrictions on the removal of 11 million people in the U.S. illegally, a vast expansion of the federal government’s deportation priorities. But there have been mixed signals from the White House over the scope of deportations and who would be covered by them.

Trump supporters and others applaud his administration’s measures, arguing that immigrants here illegally are a drain on the economy and take jobs away from citizens.

“The bigger issue is this really terrorizes the school community and these families if you think you run the risk of being deported,” MacLean said.

Brenda Avelica, 24, said her life has been turned upside down. She worries about how her mother and sisters will get by. Her father brought in the family’s only income from his job at a restaurant, she said.

“He came to this country for us,” she said.