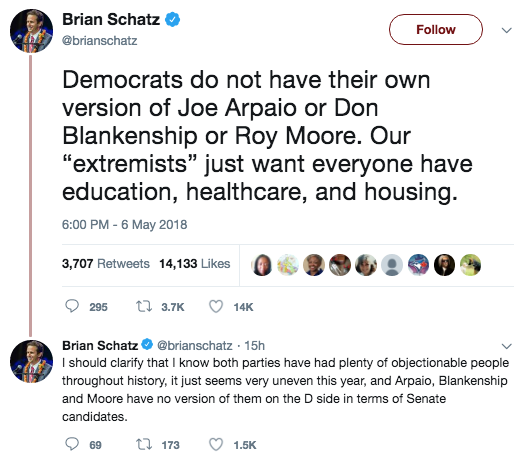 Maxine Waters: ‘I Will Go and Take Trump Out Tonight’

Waters said, “What an inspiring evening this is. I am sitting here listening, watching, absorbing, thinking about Ali even though I never met him and with this kind of inspiration I will go and take Trump out tonight.”

Rep. Maxine Waters (D-CA), a leader of the “resistance,” hasn’t been doing too well lately. She told MSNBC’s Chris Hayes that, if the Republican healthcare bill is passed, “700 billion” people will lose health access. Keep in mind that our planet has about 7.3 billion people living on it. We knew the GOP proposal was ambitious, but not quite that ambitious! Maybe there should be an ongoing senility test for congresspeople?

Rep. Maxine Waters (D., Calif.) is slated to pay her daughter another $108,000 for running a lucrative campaign operation that pulls in hundreds of thousands of dollars each election cycle, FEC filings show.

Karen Waters, the daughter of Rep. Waters, collected nearly $650,000 to date for running the operation for her mother’s campaign.

Karen is in charge of a “slate mailer” operation for Citizens for Waters, Rep. Waters’ federal campaign committee. Slate mailers, or endorsement mailers, involve a candidate or political group paying for the endorsement of another politician.

A candidate pays Citizens for Waters from their own political committees for her endorsement. If a candidate that she endorses does not directly pay her campaign committee, they must credit their own committee with in-kind contributions from Waters.

The mailers are sent to nearly 200,000 residents in South Central Los Angeles, an area where Waters holds considerable clout. The mailers contain an “official sample ballot” and brief quotes from Waters about the candidates and measures that she supports.

During the 2016 election cycle, Waters’ campaign committee hauled in nearly $300,000 from more than 20 payments for slate mailer endorsements.

The Democratic State Central Committee of California and Yes on Measure M, a group that pushed for an interconnected transportation system in Los Angeles, which was ultimately approved with 70 percent of the vote, each paid Citizens for Waters $35,000 to appear on the mailers.

A number of judges and California ballot measures additionally paid to appear on the slate mailers.

Karen Waters collected $65,287 throughout the 2016 cycle to run the slate mailer operation. Karen, along with her firm Progressive Connections, has received nearly $650,000 in payments from Citizens for Waters since 2006.

Waters’ most recent filings to the Federal Election Commission show that an outstanding balance of $108,952.15 is owed to Karen Waters. When Karen is paid the money that she is owed, she will have pocketed around $750,000 for running the mailers for the campaign since 2006.

Waters’ office did not return a request for comment on the payments by press time.

Maxine Waters, the quarter-century member of Congress who has new-found stardom as an attack dog for the left, suffered a brain freeze during an interview today when she was ranting about Donald Trump’s handling of the North Korea threat.

Speaking with Yahoo News, Waters was talking about China’s role in containing North Korea, and momentarily appeared confused about what she was discussing.

“Those in China have a great trading relationship, they sell an awful lot of stuff to North Korea,” she said.

“And so (the Chinese) president is warning Trump, ‘okay, don’t start talking about preemptive strikes. We want a diplomatic solution,’” Waters said, speculating about China’s conversations with Trump.

It’s not the first time Waters has been stymied by Korea.

Speaking to reporters with other House Democrats in February, Waters attempted to build the case for why Democrats “may” push for impeachment.

“And the fact that he is wrapping his arms around Putin while Putin is continuing to advance into Korea.”

Rep. Maxine Waters (D., Calif.) said in an interview with Elle magazine published Monday that she “is out to get” President Donald Trump and wants to ensure that he will be impeached.

While at Elle‘s 2017 Women in Washington event, Waters discussed her political engagement with millennials and her goal of Trump’s impeachment.

Elle asked Waters about her March 21 tweet, when she wrote, “Get ready for impeachment.”

Waters said she has used the word impeachment “to the dislike” of her Democratic colleagues, as they believe the declaration is premature. But Waters claimed impeachment is her goal.

“But that’s my goal. My goal is impeachment,” Waters said.

Waters said she was so outspoken about her dislike for Trump because she “could not live with the way he treated other people.”

“I’m out to get him,” she said. “And when he talked about grabbing women? Okay? I’m out to get him. I’m gonna see him out of office. And I think it’s going to happen. Get ready for impeachment.”

This is not the first time the congresswoman has been outspoken about impeaching Trump. Waters has frequently used her social media accounts to bash Trump, declaring that he and what she calls his “Kremlin clan” colluded with Russia.