A Catholic priest who had more than 2,000 photos and videos of child pornography on his computer and phone has been sentenced to 25 years in prison.

Thomas Faucher, a well-known priest in the Roman Catholic Diocese of Boise, will not be eligible for parole and must register as a sex offender.

Faucher called himself ‘one sick puppy’ as he apologized to the courtroom before his sentencing on Thursday, according to the Idaho Statesman.

‘I am deeply sorry that I was and have been connected to that in any way,’ he told 4th District Court Judge Jason Scott.

‘I was one really sick puppy. I screwed up big time. I feel so much remorse and anger.’ 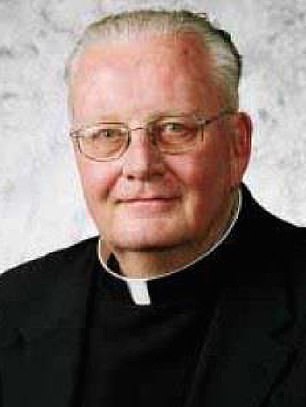 Faucher, a well-known priest in the Roman Catholic Diocese of Boise, will not be eligible for parole and must register as a sex offender

Faucher tried to convince the judge that he should not receive jail time so that he could help others and ‘give lectures on the evils of child pornography’, saying there were ‘many people’ who would ‘benefit’ if he wasn’t behind bars.

‘There are no people who will benefit if I am in jail or prison,’ he added.

But Scott was not convinced, calling the priest a ‘legitimate risk to the community’.

‘This is a crime that has potential for both immediate and long-lasting consequences,’ the judge added.

Detective John Brumbaugh of the Internet Crimes Against Children Task Force took to the stand on Thursday to describe the extent of disturbing content he found on Faucher’s devices.

Brumbaugh said he first received a tip regarding two images that had been sent from the email address wtfauch@aol.com.

Faucher spoke extensively to a person called ‘Bruno’, telling them that he wanted to have sex with boys – including some in his own family – and was attracted to six-year-old boys.

The priest also told Bruno that he had ‘satanic desires’ and that the ‘thought of killing someone does begin to excite me’.

He admitted to fantasies about sexually abusing altar boys and babies and said he enjoyed watching a video of a boy being beaten to death.

Investigators found images of Faucher peeing on a cross and a canon law book. In one chat, Faucher claimed he urinated in the wine for Mass.

The priest had a Dropbox, shared with another user, titled ‘Innocence Defiled’. He admitted in chats that he felt ‘wonderful indifference’ as he solicited more child pornography. 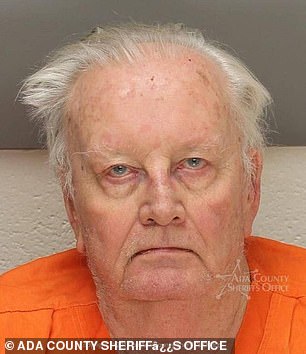 ‘It felt good to lie for no good reason except to do it,’ Faucher told Bruno in one chat.

‘Most of the time, I just make a new reality and believe it as long as it suits me.’

Details of the images and conversations were so graphic that many chose to leave the Ada County Courtroom on Thursday. Some were in tears.

Brumbaugh said the images even took a toll on himself and others who were working on the investigation.

‘The volume was something I haven’t come across,’ he told the courtroom.

Faucher was arrested in February. He told Brumbaugh that no one else had access to his email account.

He was initially charged with 21 counts of felony sexual exploitation of a child, as well as one count of felony possession of LSD and possession of marijuana and ecstasy.

Brumbaugh said there was no evidence in which Faucher expressed that he did not want to receive child pornography.

Following Faucher’s arrest, two men alleged that the priest had sexually abused them.

While the statute of limitations for most child sex crimes in Idaho was removed in 2006, the law was not retroactive – meaning abuse charges will likely never be filed.

Ada County Deputy Prosecutor Kassandra Slaven had asked for a 30-year prison sentence, noting that Faucher was diagnosed a pedophile and that an evaluation found there was a high risk he would reoffend.

‘It shakes the community. It shakes the members of the Catholic Church,’ she said. ‘He portrays himself as a victim and is not at all accountable for his actions.’

Defense attorney Mark Manweiler asked that Faucher receive probation and treatment, arguing that the evidence didn’t prove the priest looked at all the images on his computer and claiming Faucher ‘never sexually abused any child’.

Officials from the Diocese of Boise were in court for the sentencing, and spokesman Gene Fadness said they will seek to have Faucher defrocked.

‘It’s been agonizing every day for the parishioners at Saint Mary’s and for those in the community, even outside Saint Mary’s,’ he said.

‘[Faucher] was not just a priest, but a prominent priest, well known. This has been very difficult for everyone involved.’

‘Almost immediately after [Thursday], we will submit our case to Rome.’

‘The volumes of shocking information that the law enforcement investigation uncovered reveal the heinous nature of child pornography and the tragic impact upon its victims,’ the statement read.

‘While we cannot begin to fathom what brought Faucher to the point that he was able to enter into this evil and dark world, we are thankful for the efforts of the law enforcement community in doing what it can to protect our children from these crimes.’

Faucher was evicted from the home he rented from the diocese following his arrest. They had it exorcised before selling it.