Are you about to post a tweet containing “harmful” language? Don’t worry — Twitter is experimenting with a feature that will warn you ahead of time, so you don’t accidentally infect any users with your wrongthink.

“When things get heated, you may say things you don’t mean,” wrote Twitter’s official support account in a tweet yesterday.

“To let you rethink a reply, we’re running a limited experiment on iOS with a prompt that gives you the option to revise your reply before it’s published if it uses language that could be harmful.”

It’s a bit like “precrime” in the 2002 Tom Cruise film Minority Report. Twitter will notice when you’re about to use a bad word, giving you the chance to avoid a rule violation and save your account from the digital gulag.

“We’re trying to encourage people to rethink their behavior and rethink their language before posting because they often are in the heat of the moment and they might say something they regret,” said Sunita Saligram, Twitter’s global head of site policy for trust and safety, in a comment to Reuters.

Twitter’s “trust and safety” department was acknowledged by its then-policy manager, Olinda Hassan to be “controversial,” in an undercover video recorded by Project Veritas in 2018.

In the same secretly-recorded exchange, Hassan said one of the things the Trust & Safety team was working on in 2018 was ways to “get the shitty people to not show up.” (The comment was made in response to an undercover reporter asking her about the prominence of tweets from author and filmmaker Mike Cernovich).

Twitter now appears to be taking a different approach. Instead of trying to get you to not show up, the platform intends to train its users out of their bad behavior, like unruly dogs.

The Qatar-funded Al Jazeera news network published a video questioning the Holocaust and implying that Jews have benefited from it.

On May 18, AJ+ Arabic posted a seven-minute video to social media with the caption “The gas chambers killed millions of Jews … So the story says. How true is the #Holocaust and how did the Zionists benefit from it?” The Jews “exploited the Holocaust for their agenda and made the whole world focus on their murders and forget the other victims.”

For those that missed it, @ajplusarabi produced a video in Arabic straight up denying the Holocaust and claiming the Zionists were complicit.

Same people that make those cutesy progressive videos you all share. @AJEnglish and @ajplus.

The Middle East Media Research Institute (MEMRI), a nonpartisan nonprofit that says it “bridges the language gap which exists between the West and the Middle East, providing timely translations,” added captions and tweeted a translated version of the clip.

On May 19, Al Jazeera issued a statement saying that “Dr. Yaser Bishr, Executive Director of Digital Division, stated that Al Jazeera completely disowns the offensive content in question and reiterated that Al Jazeera would not tolerate such material on any of the Network’s platforms. In an email to staff he also called for the mandatory bias training and awareness program.” It said two journalists would be disciplined.

Despite the apology, Al Jazeera was apparently trying to keep westerners from finding out the contents of the video it published — with an assist by Twitter. The social media platform subsequently blocked MEMRI’s videos, without which there would have been no apology, displaying only a grey box that says that “the media has been disabled in response to a report by the copyright owner.”

Additionally, Daily Wire journalist Ryan Saavedra posted a screenshot showing that his entire tweet was removed, including his commentary, to which no copyright would apply. The extent of the censorship was somewhat hidden from him since when he was logged into his Twitter account and looked at his own tweets, his commentary was visible.

MEMRI’s entire body of work consists of similarly translated Arabic news clips, which are routinely tweeted without being taken down.

The original Al Jazeera video reportedly received 1.1 million views on Facebook and Twitter without either social media giant taking it down due to violations of its policies. Twitter has hired groups to block speech from its platform that it deems Islamophobic content or fake news. It banned Laura Loomer, a conservative Jewish American, from its platform after she said Minnesota Democratic Rep. “Ilhan [Omar] is anti Jewish.”

Twitter spokeswoman Katie Rosborough told TheDCNF Tuesday afternoon she was looking into why the translated videos exposing anti-Semitism — but not the original anti-Semitic videos — were taken down and how the copyright claim was valid.

An independent political commentator who has closely tracked the Middle East, Nervana Mahmoud, tweeted that Al Jazeera “took down @ajplus ugly Arabic video. But that is NOT because the channel suddenly becomes less #antisemitic, but because it was caught.”

“The Qatari channel is run by a group of cowards who cannot even stand by its employees when exposed,” she continued. “Denying or downplaying the #Holocaust is not new. It has been a recurring theme by AJ arabic since its establishment.” (RELATED: Top Al Jazeera Host Says Hitler Was ‘Divine Punishment’ For Jews)

Al Jazeera is owned by the royal family of Qatar, a tiny nation with massive oil money. Qatar has funded numerous institutions in the U.S. and exerted aggressive legal pressure to keep details under wraps. It did not return a request for comment, including a question about how suppressing critics squares with its apology.

MEMRI is the same group that noticed that a Philadelphia Muslim group was having children chant about chopping off the heads of their enemies.

Twitter CEO Jack Dorsey claimed in an interview this week that it was a “joke” when the social network described itself as the “free-speech wing of the free-speech party.”
Former Twitter vice president Tony Wang made the statement in 2012, declaring, “Generally, we remain neutral as to the content because our general counsel and CEO like to say that we are the free speech wing of the free speech party.”
In an interview with Wired this week, however, Twitter CEO Jack Dorsey reversed on Wang’s old statement, claiming it had been a “joke.”
“I think Vijaya [Gadde]’s op-ed in the Washington Post captures our position—our most evolved position—the best. And that is around this balance of people feeling safe to express themselves,” expressed Dorsey. “But certainly, this quote around ‘free-speech wing of the free-speech party’ was never a mission of the company. It was never a descriptor of the company that we gave ourselves. It was a joke, because of how people found themselves in the spectrum.”
The interviewer then responded to Dorsey, declaring, “But it was a joke that people took seriously and their respect for you increased because of it at the time.”
“Well, yeah, I don’t think it takes away from our defense of freedom of expression and freedom of speech. But we were not absolute absolutists,” Dorsey replied. “A lot of people come to Twitter and they don’t actually see an app or a service, they see what kind of looks like a public square. And they have the same sort of expectations of a public square. And that is what we have to make sure that we get right. And also, make sure that everyone feels safe to participate in that public square.”
Last year, Twitter co-founder Evan Williams claimed he was “wrong” about his previous beliefs that freedom of speech would make the world a better place.
“I thought once everybody could speak freely and exchange information and ideas, the world is automatically going to be a better place… I was wrong about that,” proclaimed Williams, before apologizing for co-founding a company which allowed President Trump to speak freely during the 2016 presidential election.
In 2017, Twitter’s Vice President of Public Policy and Communications also announced it was “no longer possible to stand up for all speech.”

Project Veritas has published its latest Twitter exposé, featuring both current and former Twitter employees allegedly explaining how the company receives, stores, and sells user data, as well as their attitudes on privacy.

In their undercover investigation, James O’Keefe and other Project Veritas reporters secretly recorded Twitter employees as they allegedly revealed the extent the platform surveils users.

“I’m going to send it to your wife, she’s gonna use it in your divorce,” he joked. “So what happens is, like, when you write stuff or when you post pictures online, they never go away. Like, they’re always on there… Even after you send them, people are, like, analyzing them, to see what you’re interested in, to see what you’re talking about, and they sell that data… Everything. Anything you post online.”

“That’s how we make most of our money,” he explained. “You’re basically paying for the right to use our website with your data basically, and it’s the same on every free website.”

Former engineer Conrado Miranda also revealed to Project Veritas’ secret cameras that the company “already has a lot of information about you,” even before you join Twitter, adding “there is no way” to protect users if the information falls into the wrong hands.

“I mean it’s like a level… I don’t want to say it freaks me out, but it disturbs me,” he continued. 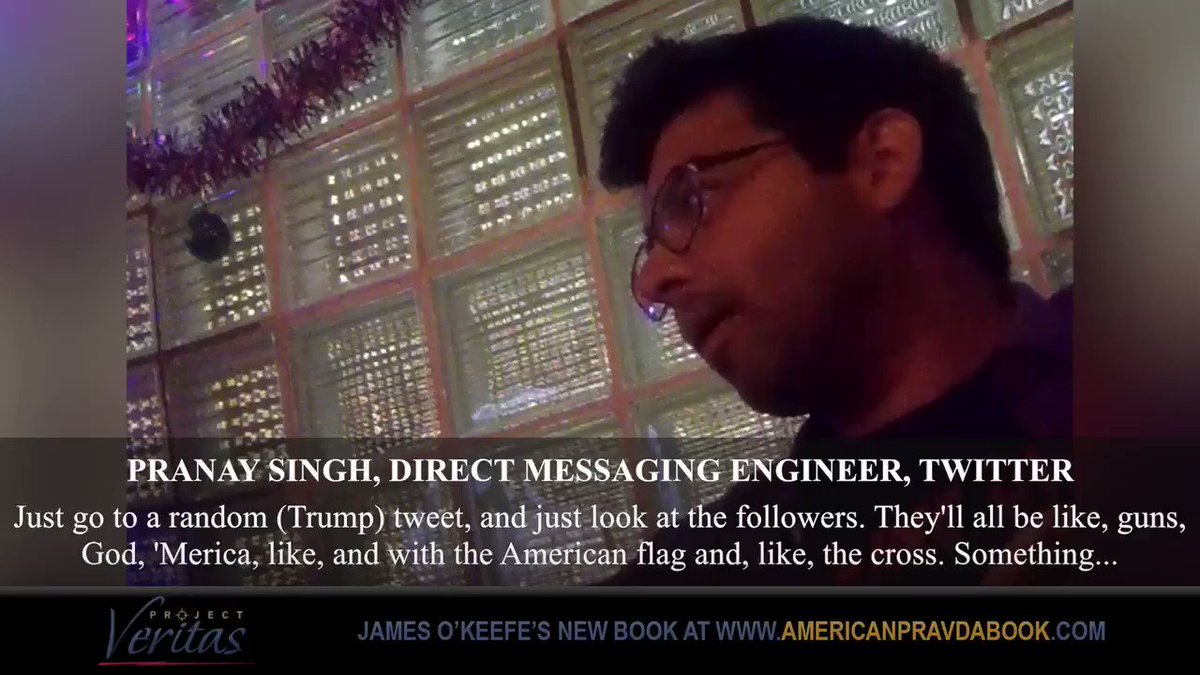