PITTSBURGH (KDKA/AP) – Police say a man bit the ear off another man in Pittsburgh as they argued about President Donald Trump.

Victim Marco Ortiz, 30, was bitten at his apartment at around 6:45 a.m. Monday in the city’s East Liberty neighborhood after a verbal argument turned physical. He ran to a gas station for help.

According to Ortiz, the roommate bit off part of his ear, twisted his finger and threatened to kill him. Not because of anything Ortiz did, but because his roommate feared that Trump will try to send him back to Mexico.

“Anytime he’s drinking, he’s going crazy,” Ortiz said. “All he would say is ‘if Donald Trump gonna take me out I gotta kill so many people, then somebody kill me and I am happy.’”

The victim’s ear was recovered by police in the apartment. Police say he was taken to UPMC Presbyterian hospital in stable condition.

Police say they know who bit the man’s ear and are searching for him. They wouldn’t give his name.

SAGINAW, MI — A 17-year-old Saginaw woman could face life in prison on charges she raped a 19-year-old man at knife point.

The charges stem from a Jan. 11 incident in Saginaw Township where Smith allegedly held another Saginaw teen at knife point and engaged in oral and vaginal sex with him.

Smith was denied bond and is being held in the Saginaw County Jail.

Her next appearance in court is a preliminary examination on Feb. 3 to determine probable cause.

Dean Hutton is a South African artist whose most notorious project involves walking around in a custom-printed black and white suit and absorbing the responses from strangers.

It was a test for me. If I can do it in a community in which I have almost de facto access to, can I do it in other spaces, where I don’t necessarily have de facto access except for the colour of my skin? You know, like, if I can’t do it at Gay Pride, then I can’t be making a whole fucking suit that says that. And, it’s still mostly an experiment, but it feels like it’s something I can do, and the reactions I am getting from it says that it is something that I should be doing.

Not sure what the term for this is, since “edgelord” is not gender-neutral. 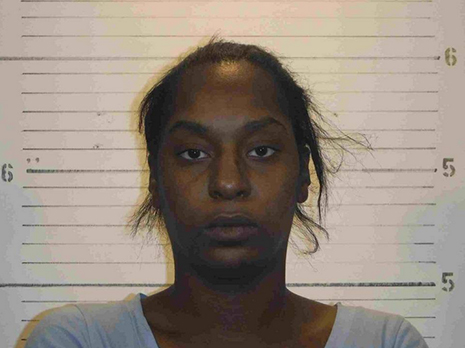 On Friday evening, just before 7 p.m., in a darkened hall in the Richmond Convention Center packed with more than 1,000 low-wage workers and union organizers, Olimpia Barajas-Ames gave the signal.

A mother of one and an organizer with the Child Care Fight for $15 campaign in Las Vegas, Barajas-Ames stood up, holding a sign that read, “$15 minimum wage and union rights for all means organizers too.” That was the tip-off for other union organizers to slap on stickers and don tee shirts indicating they want a union for employees who work on labor organizing projects spearheaded by the 1.9 million-member Service Employees International Union.

To outsiders, it may seem strange that union organizers are demanding a union of their own. But to Barajas-Ames and others who joined in the protest against SEIU, they are as much part of the precarious, low-wage workforce as workers at McDonald’s and Walmart are.

For months, organizers in SEIU’s Fight for $15 campaign have been working with the Union of Union Representatives to demand representation. Currently, nearly 100 staff at SEIU are unionized under a contract with UUR that began 30 years ago. UUR launched an investigation of SEIU in 2015 and found it was outsourcing the work of its field organizers in violation of the contract. Earlier this year, many of SEIU’s field organizers formed an organizing committee to gain union representation and in April, 15 organizers submitted UUR membership cards.

The action by the Fight for $15 Staff Union Organizing Committee at the convention in Richmond, Virginia, is the latest tactic to pressure SEIU to recognize the union rights of all its organizers. After Barajas-Ames held up the sign for a $15-an-hour minimum wage and a union for organizers, she started walking toward the stage where SEIU president Mary Kay Henry was speaking.

Fennell, who joined, says, “Nearly 100 organizers and supporters gathered, moving up toward the stage peacefully. Our plan was simply to deliver a letter to Mary Kay Henry because she doesn’t make herself available to speak with us.”

Fennell wrote the letter that was to be presented to Henry. Fennell says last February, during a luncheon with Henry, the SEIU president said that “every worker deserves a union.” The letter called on SEIU to “lead by example” and “embody the movement’s basic principles of $15 and a union.” Fennell pointedly wrote, “If you say all workers must have a union, why is SEIU International denying my union rights and those of the entire Fight For $15 field staff?”

Fennell added that the UUR organizing campaign “is not about negativity. We want to enrich this movement with integrity so that we can strengthen the national Fight for $15.”

But they never got to hand the letter to Henry. Inside sources at SEIU say the union was prepared for such an incident, and sprang into action. Fennell says, “Security prevented us from getting to the stage.” Meanwhile, on the speakers’ platform, Henry stepped back and a group of African-Americans and Latino/as who sit on the national organizing committee for Fight for $15 stepped up.

One woman on stage with Henry grabbed the mic. She berated the staff organizers and their supporters below as cameras broadcast the convention. “Are you serious? Are you going to do this right now? Do you know what it is like to get paid $500 every two weeks? … You guys get paid enough. You have a chance to get a union. I don’t.”

As Henry stood smiling faintly behind the human wall, the speaker continued, “Do you know what it is like to have your kids homeless, sleeping in the back of a van? You will never know what that is like. They will never walk a day in our shoes.”

Fennell said of the accusatory remarks, “Everyone has different struggles, but this is not fighting over scraps. This is a movement about being in solidarity. We are not competing on who has it worse. We are not trying to pull each other down like crabs in a bucket.” She said her struggles include carrying $35,000 in student loan debt and nearly as much in medical debt.

Barajas-Ames says the UUR organizers stood before Henry for 15 minutes. As the speakers on stage led the crowd in chants of “$15 and a union,” Barajas-Ames says, “The security guards became hostile and aggressive, physically pushing us back. We stepped back and stood peacefully. Our signs were grabbed and torn up.”

Two child care workers at the convention who supported the action by the UUR organizing committee felt many in the audience were hostile: “They were all up in our face, chanting, ‘This is what democracy looks like.’ We had to jump over a table to get out.”

But that was just the beginning of the troubles for the members of the UUR organizing committee. Shortly afterward, Barajas-Ames and Fennell were personally called by the national director of the Child Care Fight for $15. The two organizers were told they would not be attending the events and protests on Saturday they had been organizing toward for months. Instead, they were to pack their bags as they were being flown out at 6 a.m. back to Las Vegas. Fennell claims the national director also told them, “We will be expecting you to pay for the cost of the hotel.”

Barajas-Ames and Fennell refuse to pay for the two nights they stayed at the Hilton Richmond Downtown, which would set each back more than $300. Barajas-Ames said that amount of money represented a car payment for her, while Fennell said it would be nearly 40 hours of work, as she often makes only $9 an hour given 60-hour workweeks and after out-of-pocket gas expenses. A total of five Fight for $15 organizers who support UUR were shipped home for trying to bring attention to their cause.

Fennell says, “This represents the exact same type of retaliation that corporations do to low-wage workers.”

A UUR representative claims this is part of a broader pattern. “SEIU has been fostering anti-union sentiment for months among the national organizing committee. We think they are creating divisions between the workers and the staff organizers’ campaign.”

UUR estimates more than 100 SEIU organizers who have been outsourced should be covered by its contract, although it has only identified 40 to 50 of them. Of this group, UUR says about 10 have left in the last six months because of the difficult working conditions or retaliatory actions by SEIU. UUR has already filed one “unfair labor practice” charge with the federal government and plans to file a second on August 14.

The outsourcing is blatant, the staff organizers claim. Fennell says her job is determined solely by SEIU. “I was hired by a regional director for SEIU. All my communication is with SEIU. I work in an SEIU office.” But her paycheck, like Barajas-Ames’s, comes from the “Ardleigh Group.” One former employee calls it a “faceless, shadowy” corporation that acts as a pass-through to hide employer responsibility. SEIU documents appear to show it using paper outfits to funnel money to the Ardleigh Group, which then pays workers on SEIU projects who say they are being denied their legal union rights.

UUR president Conor Hanlon told the Raw Story, “The treatment of the Fight for $15 Organizers fits the same pattern that we see from private-sector employers across the country which turn to franchises, temp agencies, and so-called independent contractors rather than hire employees directly. We believe that rather than participate in the disastrous race to the bottom SEIU should commit to its organizers who, like all workers, deserve a career path, fair treatment, and good pay and benefits.”

In addition to accusing SEIU of “evading responsibility of its employment practices,” UUR alleges that SEIU engages in discriminatory employment practices. These include “women are paid less than men, Black staff are paid less than non-black staff, and Latina/Latino staff are more likely to be hired as temporary employees rather than full-time employees.”

Fennell says SEIU’s habit of overworking and underpaying organizers leads to “extraordinarily high” turnover, which harms labor organizing and the goal of improved social services. “We feel passionate about creating affordable child care for all. We can serve our community better when we have the same worker rights as the child care workers who we are fighting for.”